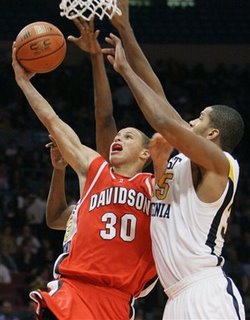 When the 2008-09 schedule was released I was naturally excited about the strong potential for Purdue's first Big Ten championship Since 1996. Aside from that, there were two games I circled on my calendar as must see events. The first was the Duke game, which ended with a resounding thud. The second was tomorrow's game with tiny Davidson.

Why would I be excited about seeing Purdue play a tiny college of 1,700 students from the hills of North Carolina? This college is literally smaller than my high school (enrollment 1,937). They are playing in Indianapolis for one reason and one reason only.

I like to consider myself a true fan of the game of basketball. I love my teams, but I also have a special appreciation for seeing the game played the proper way. That is why Butler is one of my favorite non-affiliated teams to watch. The same is true for George Mason when they made their Final Four run a few years ago. To me, the game is incredibly entertaining when five guys are on the floor functioning as one single unit. This is also why I hate watching the NBA.

It is also special when a player comes along and simply transcends the game with his greatness. This is made even more rare when said player plays for a team that still functions as one unit so well. Stephen Curry is that type of player at the college level. He is the very definition of a pure shooter. Some consider him undersized for the NBA, but who cares? This is a kid that literally only needs to be within sight of the basket in order to hit it. It is uncanny how he is averaging better than 31 points per game while drawing double and triple teams each night. As seen earlier this year when his team played Loyola-Maryland, he's not afraid to get his teammates involved either as long as it means they win. He is a selfless superstar, and though I am heading downtown tomorrow to see the Boilers, I want to see this kid play in person just as much.

As much press as Curry gets (and it is well deserved) the Davidson Wildcats are a lot more than one superstar guard. How many times in college basketball do you find the nation's leading scorer on some small school in a bottom level conference? Many times that player's team is incredibly lucky to make the NCAA tournament because they are a one man show. If you look at the top five leading scorers in Division 1 right now, you will see Curry at the top averaging 31.9 per game, followed by kids from Cal State Fullerton, Chicago State, Virginia Commonwealth, and North Dakota State. That means in that top five only Curry's Davidson squad and maybe Eric Maynor's Virginia Commonwealth team have a realistic shot at grabbing an at large NCAA bid.

That fact alone shows me why Davidson is dangerous. They are far from being a one man team. Curry has a good supporting cast around him that can carry things if he is struggling, then support him when he decides to go nuts. That is precisely what happened in Davidson's last marquee game against West Virginia in New York. Players like 6'8" forward Andrew Lovedale and 6'4" guard Bryan Barr buoyed things until Curry went apeshit in the final minutes. He had 13 of Davidson's final 15 points in a 68-65 win.

I would even argue that this year's Davidson team is better than last year's. There was some question last season as to if the Wildcats would have gotten into the NCAA tournament had they lost the Southern Conference Tournament. A season ago they went 0-4 in resume building contests against Duke, North Carolina, NC State, and UCLA. They also had a couple of bad losses to UNC-Charlotte and Western Michigan. It ended up not mattering though as they were spotless in Southern Conference play before beating Gonzaga, Georgetown, and Wisconsin in the NCAA's.

This year they already have some good wins as padding. They have major conference wins over West Virginia and NC State while the only loss was a four point setback at Oklahoma in the second round of the NIT. Curry had 44 in that game, and had they won we would likely be viewing this game as a rematch.

I still point to their game against Loyola-Maryland as a prime example of why they are so dangerous. In that game, the Greyhounds placed a double team on Curry for the entire game. Instead of forcing things like many selfish stars would do, Curry was content to sit in the corner and say, "okay, you want to do that, fine. I'll let my guys play 4 on 3 and just stand here taking up two guys without doing anything." Davidson won by 30. It is this attitude of putting his team first that makes him a dangerous player.

Of course his sheer talent also plays a large hand in that. The Loyola game is the only game in which Curry was held below 27 points. He is a 39% shooter from 3-point range, usually jacking up 10 shots from long range per night. He hits 48% of all shots from the field, and is 87.7% from the line. He has the ability to break down one-on-one coverage off the dribble and get to the basket. He can create his own shot from anywhere on the floor. If he does get a totally open look, you might as well put the points on the board and run to the other end because he isn't going to miss. For good measure he is getting his teammates involved by averaging almost 7 assists per game. That's like adding another 14-18 points per game to his average. He is a thief on the defensive end with almost three steals per game, and rarely turns the ball over.

Curry is complimented by a strong supporting cast. Lovedale (13.9ppg) and Barr (9.7ppg) are secondary weapons that are often the benefits of Curry's assists. These guys can score when Curry draws a double team, and as a whole the offense flows very well. If Curry is double teamed, as he often is, this offense is good at finding the open man and still scoring. Loveldale provides the bulk in the paint with 10.7 rebounds per game as well.

Other strong contributors include 6'6" Will Archambault (8.7ppg, 2.1apg) and 6'7" Steve Rossiter (6.3ppg, 7.2rpg). Depth is a bit of a concern, however, as it is with most small schools. Davidson only goes eight deep, and only six of those eight average better than 21 minutes per game. The reverse side of that coin is that these guys are conditioned for long stretches of play, so it is nothing unusual for them at this point.

Davidson is also a pretty strong defensive team. They gave up 95 points to Tennessee-Chattanooga in their last outing, but they generally hold opponents under 70. If they give up more than that they are more than capable of keeping pace with scoring of their own. Davidson has cracked 90 points four times in nine games, and two of those saw them go over the century mark. Since Curry himself hasn't been higher than 44, that is another sign that he is far from being the only weapon.

This team rebounds well at almost 40 per game and they share the ball extremely well. They are averaging an astonishing 15.3 assists per game. They also get almost 9 steals per contest, leading to fast break points. Turnovers are not an issue, as they have a miserly 11.8 per game average. The team as a whole is full of good shooters. They can keep a lead with a 73.5% average from the free throw line. Lovedale and Rossiter allow them to play inside-out, as they hit 36% of their 3-pointers while having those two hold their own in the paint.

Do not let Curry fool you. He is an excellent player, but this is a very, very good team around him. This is one of their final "name" contests of the season too. They get us, then Duke in early January before a steady diet of the Southern Conference. As much as they are going to get every team's best shot in that conference, this is a chance for them to get a big win and set themselves up for another run in March with a good seed. Should they get either us or Duke and run the table again in the SoCon I do not think it is a stretch to consider these guys as a top four seed. This is especially true if they somehow get both.

Fortunately, it is also a chance at a very good win for us. If we get them, we most definitely want them to get Duke in January. That (and a sweep of Michigan) would show that maybe we simply had an off night against the Blue Devils. We need this win as a jewel from non-conference play. Get it, and we're most likely looking at 11-2 before starting the Big Ten with a very good Davidson win, a decent Boston College win, a close loss to top 5 Oklahoma, and a not bad loss to duke. A loss, however, will continue to raise questions of how god we are.

So how do we beat them? When facing a dominant player such as this I am often an advocate of shutting down the other four guys on the floor and daring said player to score 60 and beat us by himself. The thing with Curry is he just might do exactly that! The Kramer vs. Curry matchup will be intriguing. I do not expect Chris to completely shut him down. But if he can at least limit what Curry does offensively without us having to commit a second defender it will greatly improve our chances of victory. By limit I mean hold him under 30, which won't be easy. Still, if he can do that I am confident our other four defenders can match up well with the other four Davidson threats. Statistically they are superior, and they may have even played a better overall schedule to this point.

On the other end of the floor we must find more consistent sources of offense. We have a slight size and depth advantage, so we must exploit it. If the three ball isn't falling, pound it inside. E'Twaun must start creating his own shot again. Chris Kramer needs to shake off his fears and drive to the basket. Keaton Grant simply needs to hit some shots. Robbie Hummel is coming along, so he needs to keep improving. JaJuan and Chally need to keep giving us a combined 22 and 10 in the paint.

I also think depth could be a major factor here. We have eight guys that not only play a ton of minutes, but they are capable of starting as well. Ryne Smith and Bobby Buckets also give us a pair of guys we can use for quick minutes off the bench. They are good shooters too, so they aren't total liabilities when they are on the floor. I expect a very tight game where hopefully our depth can wear them down. Unfortunately, with a player like Curry they have a chance to win any close game. He is more than capable of taking over the final minutes and swaying any contest in their favor. Purdue 70, Davidson 69