Share All sharing options for: A Milton Berle game 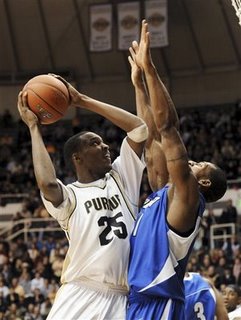 ESPN’s Bill Simmons is a polarizing figure. I happen to like his writing, but I recognize that many people don’t. He did come up with the term "Milton Berle game" to describe events like what happened in Mackey Arena last night. I’ll save those wanting a more family-friendly atmosphere from the full explanation, but basically, we took out just enough to win.

I wrote in the preview that we should be concerned if the final margin was under 20 points. I realize now I was wrong in that. I’ll give credit to IPFW for playing a defensive-minded game. Still, we kept the lead comfortable with no serious charges throughout the second half. We also played the bench mafia, unlike in the Davidson game. Both of those factors clearly contributed to the closer than expected margin. Even then, IPFW did score the game’s final five points in the last minute.

Positives from the IPFW game:

JaJuan Johnson – He had to play extended minutes because of the injury to Calasan and made the most of it. I like that he is learning to use his size against these smaller teams. It is a critical step in his development. His play at the end of the first half was a play that he probably would not have made a year ago. Getting into the conference schedule will be another major step for him. As long as we have Calasan healthy in order to take some of the burden off of him it will allow JaJuan to develop at his own pace. JaJuan was also key in stepping up for an off night from Robbie. JaJuan took a lot of high percentage shots down and kept his fouls down.

E’Twaun Moore – Speaking of taking a step forward, E’Twaun did last night with a better performance. His shooting was better, but more importantly he didn’t turn the ball over. Three-point shooting was still an issue, but it was for the whole team. I’ll take any game where E’Twaun scores 19 and gets to the line a few times.

Marcus Green – Green is another player that filled in very well for the cold Hummel and injured Calasan. 12 and 9 is not what we expect out of him, but as I keep saying, the mere fact he can give us 12 and 9 is what makes us so good.

Lewis Jackson – I agree with Boilerdowd in that sometimes LewJack doesn’t appear to do much in the box score, but the way he pushes tempo has a huge effect on the game. The fact he had nine points and no turnovers in a pretty controlled game is even better. It will be interesting to see if he maintains his starting spot once we get into Big Ten play.

Negatives from the IPFW game:

3-point shooting – Clearly this is going to be a hot and cold issue throughout the season. I’d much rather have it be cold against a team we can dominate inside like IPFW. Keaton Grant went back into hiding. He and E’Twaun combined to shoot worse than 20% from long range. We need to use nights like last night to develop more scoring options inside for the Big Ten games that we’re going to struggle from long range. This was really the only negative from last night.

We have one final tune up this coming weekend against a Valpo team that actually played North Carolina fairly well. It should be a good game in the sense that we can’t totally go through the emotions against them. We also have some health issues now with Kramer and Calasan, but at least they get a week to heal before opening Big Ten play. If we can beat Valpo without them, and I know we can, I wouldn’t play them at all.

Ultimately there isn’t a lot you can take from last night. We beat a team we were supposed to beat. That’s all you can really say, unlike, say, losing at home to Northeastern by 13 and setting a new record for futility in your own building.

Detroit (3-7, 0-2 Horizon League) – The Titans finally got another win, but it was against a Division II school. They also just got lit up against Illinois 82-51. We’ll get no help from them schedule-wise.

Eastern Michigan (2-9, 0-0 MAC) – Both wins came against non-Division I teams. They’ve also lost games to Brown, Detroit, and Oakland. They are one of many teams dragging down our RPI as we seem to play good or awful teams with no middle ground.

Loyola (IL) (7-5, 0-1 Horizon League) – The Ramblers have been pretty good of late in winning five of their last six. The only loss was a conference one to Illinois-Chicago. Unfortuantely, the best of those five wins is either Holy Cross or Missouri-Kansas City

Coppin State (1-8, 0-1 MEAC) – The Eagles have lost eight in a row and have yet to play a home game. They are in the midst of a Wisconsin-Syracuse-Colorado-Oklahoma-Missouri road trip.

Boston College (9-2, 0-0 ACC) – RPI-wise they are our best win to date. According to CBS Sports they are 24th in the RPI and they haven’t lost since we beat them. They should be 12-2 before starting a tough ACC slate that will help us with each victory they get.

Oklahoma (12-0, 0-0 Big 12) – They haven’t really played anyone other than us and Davidson. Still, they haven’t lost. They are #2 in the RPI and are projecting as a #1 seed in ESPN’s Bracketology. We happen to be the #3 seed in their region, and I certainly wouldn’t mind a rematch.

Duke (10-1, 0-0 ACC) – Very nice win over Xavier this weekend. I definitely give them credit for scheduling five non-conference games away from Cameron Indoor. Two were true road games too.

Arkansas-Pine Bluff (1-9, 0-0 SWAC) – They finally got a win over Southern Methodist. ESPN projects them as the SWAC representative too. That should tell you how bad that conference is. I think every team we have played would beat them.

Indiana State (2-8, 0-0) – They should lose points for beating DePauw. AN improving IUPUI squad is playing them at Conseco as I write this and is leading them 42-30. Harry Marshall makes them a better team and will probably mean a couple of wins.