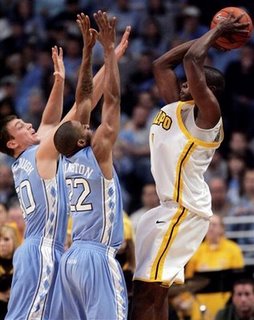 I had planned to update tonight much earlier with some bigger news after a day full of high school basketball, but things did not go according to plan. I was asked to cover the Zionsville Holiday Tournament today featuring future Purdue forward Patrick Bade as a centerpiece with his Class 4A #3 Franklin Central Flashes. My responsibility was to cover host Zionsville. After the Eagles handily won the opening game 69-30 I figured I would get a chance to see them face off against Bade in the championship, so I left early to enjoy my afternoon.

This is where the first thing went wrong.

Franklin Central was upset by a feisty Lafayette Central Catholic squad 65-59. I wanted to get up there in time to catch the tail end of their third place game, but a return at Best Buy on Michigan Road went longer than expected. As a result: I didn’t get to see Bade do much more than warm up before the afternoon game.

Tonight’s update was delayed further by a sudden power outage at Casa de T-Mill, much to the dismay of Mrs. T-Mill. She was forced to watch the majority of the second half of her Canes’ bowl game with Cal via cell phone gametracker. Power was restored just in time for Jacory Harris’ backbreaking fumble and two-minute drill that made Donovan McNabb’s Super Bowl performance look rushed. In reality he had to think it was a two hour drill.

In short: I have no first hand account of Bade’s skills, Jacory Harris’ two-minute drill can be timed with continental drift, my afternoon matinee of Seven Pounds was good, but depressing, and I am on my fourth attempt to get the original Guitar Hero to work on my Playstation 3. Fortunately, Drew Brees and Dustin Keller are poised to lead me to my second consecutive Fantasy Football league title tomorrow.

This has nothing to do with tomorrow’s non-conference finale against Valparaiso, but at least it is likely a more entertaining lead in to the preview.

2007-08 postseason: 91-67 loss to Houston in Second Round of Collegiate Basketball Invitation Tournament

Valparaiso will always be remembered for their sweet 16 run in 1998 and Bryce Drew’s deadly 3-point shooting. During that season we actually came close to playing them for a Final Four berth in the Elite 8. They have had quite a bit of success on the court outside of that one season. They have seven tournament appearances in the last 12 years and went to the inaugural CBI tournament last season. They have a tendency to struggle against ranked teams, however.

They lost all five games a year ago played against ranked opponents. This year is no different as they have already lost to #1 North Carolina. ESPN’s records go back to the 2001-02 season and they don’t have a victory over a ranked team in that time. Most of those games haven’t even been competitive.

Valpo lost by 22 to North Carolina, but that is a pretty good showing against the best team in the nation. Unfortunately, the rest of the schedule hasn’t been kind. The only wins are against Central Florida, Youngstown State, and Marian College. They beat Central Florida by 17, but that was reversed on Monday when the Golden Knights won in Orlando by 25. They also lost all three games in a tournament in the Virgin Islands.

Valpo is not a strong offensive team. Only two players, Urule Igbavboa (who has the best hair of any opponent) and Michael Rogers, average in double figures at 10.4 each. As team they only put up 61.5 points per night. Their shooting percentages aren’t that strong, either. They hit only 41% from the field and a dismal 59.5% from the line. 3-point shooting is slightly better at 31%.

The Crusaders feature a regular eight man rotation, but they struggle to rebound more than we do. No one gets more than six rebounds per game. This comes from an extreme lack of size. Igbavboa is the tallest player on the team at 6’9". Cameron Witt is also a 6’9" that plays, but has struggled against everyone except Central Florida and Marian. The Crusaders are also incredibly young with seven freshmen and two sophomores on the roster.

One player to watch out for is freshman point guard Erik Buggs. The 6’ 150 pound Buggs is a good distributor at almost three assist per game. He had eight dimes in the Crusaders’ last game. He can also be a threat to score as he was in double figures for the first three games of his collegiate career. He is prone to turnovers, but so is the entire Valparaiso team.

As much as Valpo struggles to score they are even worse defensively. For them the equation is simple. If they hold a team under 60, they win. If they give up more than 60, they lose. Giving up 85 points to North Carolina may be a good thing, but giving up 85 to the same Central Florida team you previously held to 52 is not.

Like most 3-8 teams, it is hard to find something that Valparaiso does particularly well. They are young, they struggle to score, they turn the ball over, they don’t defend well, and they can’t rebound. 12 assists per game is good, but that can only take a team so far. The Crusaders had a strong year in their first season of Horizon League competition, but this year will be much more difficult.

Meanwhile, we are facing injuries. Even then, I don’t think it will be enough of a difference to swing this game in Valpo’s favor. It is our final tune-up before Big Ten play. Honestly, if we lose a game like this we have no business considering ourselves as a conference favorite. Stranger things, such as Portland State over Gonzaga last week, have happened. We should be encouraged by a number of things statistically. Nothing is more encouraging than the fact that our last opponent, IPFW, handled the Crusaders by 17 points on their own floor.

This is not a good team. I am not going to blow smoke and talk about how hard they play and all that. They are inferior to us and even if we sit Kramer and Calasan so they can heal we should still win easily. This is nothing more than another chance to fine tune things before getting into conference play. Tuesday’s game against Illinois is far more important.

I look for JaJuan to have another big day against a smaller opponent. It’s good too, because these types of games are critical to his confidence. Robbie Hummel should have a decent night as well against the home town team. Keaton Grant and E’Twaun Moore need to keep working on their shooting, so there should be plenty of chances for that. Valpo allowed Central Florida to shoot better than 65% from the field in its last game, and allowed 13 of 22 for the Golden Knights from 3-point range. It would take a horrible night by our entire roster to make this one close. Purdue 80, Valparaiso 55