Share All sharing options for: Here come the Dukies 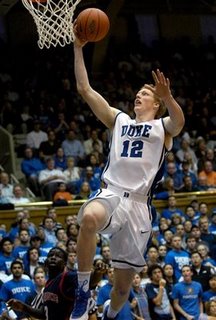 That is where I am going to be tomorrow night. Saturday’s loss to Oklahoma took some of the luster off of this game, but losing to Oklahoma on a neutral floor is not like losing to Wofford at home last year. There is little more you could ask for in this game. You have a pair of teams on the short list for this year’s Final Four. Both teams will spend ample time in the top 10 all season. A rematch in March is not out of the realm of possibility either.

It is a game so exciting that my own wife, who doesn't like college basketball, is excited about going. Believe me, that is an accomplishment. the University of Miami baseball program knows all about Those Loud Girls, and one of them will be making a cameo in West Lafayette tomorrow night.

Duke represents what we want to be as a program. Three national championships. 14 Final Fours. Dozens of All-Americans. Blue Chip recruiting classes without even trying. This is what we want. this is what we can be. With all that history, some are calling this the biggest game played in Mackey Arena since John Wooden and some guy named Lew Alcindor with UCLA opened the building more than 40 years ago.

I am in agreement with Boilerdowd on this one. If we lose this game, we are suddenly 0-2 in real non-conference tests with only Davidson remaining. That would be a little too close to acting like the football team. The Daily Gopher is already openly questioning this Purdue team. My answer is: Of course we’re tense when we get called for a foul anytime we’re within five feet of a player. A win can quiet some of the critics like this, but more importantly it will position us better for March and help the Big Ten finally win the ACC/Big Ten Challenge.

The reason a win would position us so well is because Duke has been Duke so far. They are 7-0, in the top 5, and have only seriously been challenged once. Because of Michigan upsetting UCLA they have yet to play a ranked team, but they did top the Wolverines in the 2k Sports Classic rather easily. They will actually play the Wolverines again this weekend before facing Davidson and Boston College down the road as common opponents.

The one game in which the Blue Devils have been challenged came as an unexpected shock. In between the opening rounds and finals of the 2K Sports Classic Rhode Island visited Cameron Indoor Stadium and very nearly shocked the nation. The Rams fell 82-79 after leading for most of the game, Duke scored on its final seven possessions and needed a defensive stop in the final seconds to hold on for the win. Rhode Island isn’t a bad team, but they aren’t really in Duke’s league.

This will be Duke’s first true road game. Like us, they have played all home games except for a pair in Madison Square Garden. That is like a second home for Duke anyway. Our defense must be up to the task against a team that is averaging nearly 84 points per game. It will almost be like looking in a mirror. They don’t have one dominant player like Oklahoma’s Blake Griffin, but they have plenty of talented players in key roles to spread around the scoring. their style of play is similar to our own in that they rely on outside shooting and defense.

Four players average in double figures while a fifth is just short at nine points per game. 6’8" sophomore forward Kyle Singler leads the team with 16.7 points per game and almost 7 rebounds per contest. He is a lot like Robbie Hummel. He hits better than a third of his 3-pointers, yet he can play inside. The matchup between these two sophomore players should be one of the best individual subplots of the night.

There is a similar type of matchup at the guard position as E’Twaun Moore will face off against fellow sophomore Nolan Smith. Smith averages 12.4 points per game and can create his own shot much like Moore. I’m not sure if Smith will play on Moore defensively, but you can expect Mr. Kramer will definitely get a look at him on the other end of the floor.

John Scheyer is the latest in a long line of white guy outside shooters that is hated by everyone outside the Duke program. He joins Greg Paulus and J.J Redick as guys that are excellent players, yet they receive and unusual amount of enmity by opposing fans for what they do. I am not one of those fans. I love watching hard workers and pure shooters. The 6’5" junior from nearby Northbrook, IL annoys everyone by simply refusing to miss free throws when fouled. Still, free throws win ballgames and he does what is asked of him at the line. I resepct that. He had a season high 23 against Rhode Island and averages more than 12 points per game. He isn’t as much of a 3-point threat as Smith and Singler, but he can hit it from long range.

One player that concerns me is junior Gerald Henderson. We tend to have trouble with versatile swingmen like him, and he is more than capable of causing that trouble. His points and rebounding numbers are down from a year ago, but he still gets more than 11 per night. His best game came against Southern Illinois when he hit four of five 3-point attempts in a 20 point effort. He is listed as a guard-forward, so he plays in one of the more dangerous swing positions on the floor.

The fifth starter reminds of John Allison. I say that because he is 7’1" and he only gets 3.7 rebounds per game. Brian Zoubek underperforms for his size. He starts, but only plays about 14 minutes a night, chipping in 6 points. Those rebounding numbers are just sad though. A 7’1" guy should accidentally get at least seven rebounds per night. Of course, he does play limited minutes and that undoubtedly contributes to lower numbers.

Paulus and Lance Thomas are the top guys off the bench. Thomas is a 6’8" forward that can cause some problems inside for us. He is coming off a career high 21 against Duquesne, but the junior hasn’t been as consistent as some would like. Paulus is a former starter who has played a much reduced role this year. He is only averaging 5.5 points per game after being in double figures each of the past two seasons. We cannot forget about him when he is in the game though.

Paulus is the only senior that sees extensive time in what is essentially an eight man rotation. Freshman Elliot Williams rounds out that rotation at 3.3 points per game in 16 minutes a night.

There are two major reasons that give me hope for tomorrow night. Duke is not a strong rebounding team, and they are prone to turning the ball over. If our defense is on we can truly take advantage of this, especially the turnover aspect. Duke actually averages more turnovers (15.1) than assists (14) per night. They haven’t exactly played some stout defensive teams either. Michigan is probably their best win. Montana, Georgia Southern, and Presbyterian aren’t exactly known for their defense.

They rebound by committee just like us. They spread scoring around just like us. Those two major areas are pretty much dead even. I was very pleased with the way we handled Blake Griffin on Friday. He still got his numbers, but he had to work a lot harder than anyone expected. If we can continue to play in the paint like that we should have a much easier time against Duke. They don’t have that true post presence, while Nemanja Calasan showed a lot of heart in the Oklahoma loss. If he can get some help from JaJuan inside we will have a major advantage.

Henderson is a major advantage that Duke has on the defensive side of things. Both he and Scheyer have been known as thieves, and Henderson may be one of the better finishers on a fast break in the country. Duke gets almost 11 steals per night, so taking care of the ball is paramount. We cannot afford to give up transition baskets with dumb turnovers. Whoever controls the defensive timbre of this game will come away with a win.

To me, these teams are nearly equal. They have experience in all the right places, and both have enough coming back to think next year could be even better. That doesn’t take away from this season, however. I think this game will be decided in the paint. The backcourts of each team are nearly equal, but Calasan and Johnson have each performed better than Duke's frontcourt. I am especially encouraged by Calasan’s effort against Oklahoma. That was probably his best game as a Boilermaker, and it came against one of the premier post players in the country.

JaJuan needs to step up and help him though. He was saddled with foul trouble against Oklahoma. If we can get him the ball inside he should have some room to operate. He has to stay out of foul trouble though. This is true for everyone else, though I don’t expect there to be a huge difference in foul shooting like the Oklahoma game. I should hope not, playing at home.

Robbie Hummel needs to play like Robbie Hummel. E’Twaun Moore has been very impressive so far, but Hummel has been fairly quiet. He only had 10 points in each game in New York, and most of his points have come later in blowouts. He is due to take over a game. I like that he is hitting almost 50% of his 3-pointers too. If he and everyone can hit them like we did against Oklahoma it will be a major positive.

Finally, there is the crowd. I want it loud. As I said late last week, if you’re going to sit I don’t want you there. Stay home and give your ticket to someone else who is going to be loud from the opening tip until the final buzzer. Duke allegedly has the best home court advantage in the country. This is our chance to prove those people wrong. We have a nationally televised game that is going to be watched by everyone who follows college basketball. I know the Paint Crew is going to do its part, but I want the alumni to do their part as well. Everyone needs to act like a Paint Crew member for one night. Let’s have some fun, you fellow alumni. Paint your faces, dress up. Stand up and shout all night long. It won’t kill you to act like you’re 21 again for one night. If we can all do that we can turn what I think will be a win anyway into a fun blowout.

People are starting to doubt us. Let’s go make a statement. Purdue 71, Duke 65