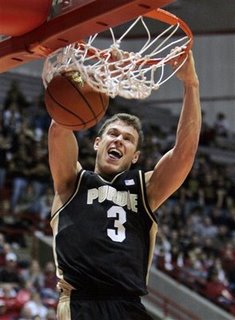 Last night was a good win. Yes it was over a pretty weak opponent, but we went into someone else’s house and put on a defensive clinic. Ball State is our only true road contest of the non-conference season. We don’t normally play a ton of road games, but I was surprised that this is the best road opponent we could come up with. It will have to do though. We won’t get another opportunity in a hostile environment until we go to Penn State on January 6th.

The numbers don’t lie though. This was a beatdown. I would even say the defense was much improved compared to the UAPB game. Against the Golden Lions we won mostly because they are simply awful. The Cardinals actually have a little bit of talent, but we were able to smother it. There is a still a way to go for us offensively, but this was a positive step.

Positives from the Ball State game:

Limited turnovers – Just last Saturday in a 48 point win over Arkansas-Pine Bluff we had a sloppy game. Yes we forced 33 turnovers, but we committed 22 ourselves. This prevented any real flow to the offense, but the sheer difference in talent prevailed. Last night we took care of the basketball against a better team and cut things down to 12 miscues. This is the first step in getting the offense back in a flow. We also didn’t rely on the 3-pointer as much as we have in past games and looked for other options to score.

If our 3-pointers are falling that is great. That allowed us to offset the free throw differential against Oklahoma. Last night they still fell well (38%), but we used our strength to score in other ways. This increases our versatility and prepares us for games where the triple isn’t falling. Limiting turnovers helps in this because we seem to have more when we try and force the ball inside. If we can successfully get it down low to Calasan, Johnson, Hummel, and Green without having the ball knocked away it will open things up on the perimeter.

Defense – This was probably our best defensive game so far. This is how we are going to beat the better teams we face, and we desperately need to improve here with Davidson coming up. Ball State shot 26% from the field, had 21 turnovers, and had 39 points. According to ESPN, that’s their lowest scoring output since the Truman administration. Anthony Newell was the only player in double figures and had to work incredibly hard to crack 11 points. The value of that 11 is taken away when he does it on 3 of 12 shooting from the field and 4 of 10 from the line. We basically dared their best player to beat us single-handedly, then took him away.

Ryne Smith – The freshman only played five minutes, but they were a big five minutes. He missed the previous five games because of a nasty skin infection but knocked down a pair of threes for six points. Getting him some valuable PT will help as we look to expand depth. He and Bobby Buckets are the critical 9 and 10 guys that aren’t called upon often, but when they are they need to be ready to contribute. I like that both are pretty good shooters and are capable of hitting a big three if other options are covered. I’d still play Bobby in a tight spot before Ryne, but Ryne’s time will come.

Robbie Hummel – Welcome back! Please keep giving us 15 and 9 every night. To this point I have felt that Robbie has looked a little off in games. He hasn’t done much in the first half and many of his points have been what I call "inconsequential baskets". By that I mean he has been doing a lot of scoring after the game has been decided and it has made his overall numbers look better. Last night he was a much larger part of the offense, just like a Big Ten player of the Year should be.

Chris Kramer – The Secretary of Defense is back. I don’t have a problem with Chris not scoring as long as he keeps rebounding, providing assists, and playing tough defense. He had 6 dimes last night against zero turnovers.

Rebounding – We won this battle 39-34. As much as we have struggled in this area I look at it as a positive any time we out-rebound a team no matter the opponent. The way we forced poor shots from Ball State led to plenty of chances too.

Negatives from the Ball State game:

None – This was a very workman-like win. It was a Purdue-style win too. We made Ball State play our style of basketball for 40 minutes and walked out with a 29 point victory. It’s hard to see anything bad with that.

We need to have more of the same Saturday against an Indiana State team that barely has a win on its record. They are a very young team in rebuilding mode, so we should expect another large victory margin where everyone gets to play.

It is also a final tune up for what should be a huge game against Davidson in Indianapolis a week later. We desperately need that game as a marquee win since the Wildcats are gathering plenty of their own.

Here is a quick look at our eight previous opponents and how they are currently fairing. Most of them won’t give us much help on the strength of schedule, but we could always benefit from a couple of surprises.

Detroit (2-5, 0-2 Horizon League) – the Titans have already started conference play with road losses to the Wisconsin schools (Green Bay and Milwaukee). Both of those teams are 2-0 along with Butler at the top of the league. The two wins have come over Eastern Michigan and St. Louis. The St. Louis one hurts a little more as explained later.

Eastern Michigan (2-6, 0-0 MAC) – So much for this being a breakout year for the Eagles in the MAC. Their loss to us started a six game losing streak that featured losses to Brown and Detroit. They very nearly upset Georgia in the NIT, but no dice there. The two wins are over Marygrove College and Wayne State, who aren’t even Division 1. To make things even more fun, their coach was recently suspended for an altercation with a fan after the Detroit loss.

Loyola-Illinois (4-5, 0-1 Horizon League) – The Ramblers have an improving win over Georgia, but I think if we had a shot at the bulldogs ourselves it would have helped us more in the end. Georgia is an improving team at 6-3 and playing in the SEC will bolster their schedule. It’s unfortunate, but Loyola’s big win denied us a chance of a "name" win. Loyola opened conference play with a loss to crosstown rival Illinois-Chicago. The opening loss to non-D1 Rockhurst drags them down even further, making me wish we had played Georgia even more. Georgia is their only win of note.

Coppin State (1-4, 0-1 MEAC) – The only win came in a non-D1 game against Wilmington. The MEAC is a pretty weak conference and they are down with a 14 point loss to 3-6 Morgan State. Like UAPB, they don’t play a home game until much later, a December 29 game against Colorado of all people. A later game at Oklahoma should allow for some comparison.

Boston College (6-2, 0-0 ACC) – This is easily our best win to date and likely only one that can get even better. A good showing in the ACC is paramount for this win to have some value, and BC is capable of doing that. The only other loss came to the same St. Louis team that has lost to Detroit. Wins over Iowa and UAB help BC’s profile at the moment, but they were just taken to overtime by 1-6 UMass. Expect the Eagles to be up and down all season.

Oklahoma (8-0, 0-0 Big 12) – I really, really want this one back. Since beating us they survived against USC at home and pulverized Tulane. They are also the only team to beat Davidson so far, and the Wildcats have gotten not one but two major conference wins that eluded them in the regular season a year ago. Had we finished off the Sooners we would still likely be a top 10 team and we would have a major win on our resume.

Duke (8-1, 0-0 ACC) – Circle February 15 when Duke travels to Boston College as a big chance for our loss to be somewhat vindicated. I think we just picked a bad night to have a really off game. If we can sweep both Michigan games and BC can knock off the Blue Devils things may look a little more even. They also get Davidson at Cameron Indoor on January 7th meaning another chance for those who do wild opponent comparisons to speculate. The bottom line is that it was still a loss, and hte margin makes it worse.

Arkansas-Pine Bluff (0-7, 0-0 SWAC) – Expect zero help from the Golden Lions this year. Their conference as a whole is just 10-63 and the best record is Prairie View A&M at 3-5. Yikes. Of these 10 wins, just one (Grambling State over Morehead State) came over a full member of Division 1. The rest came against the likes of Ecclesia, Southwest Assemblies of God, Champion Baptist College, Southern-New Orleans, William Carey, Tougaloo, Tuskegee, Houston Baptist (provisional D-1), and North Carolina Central (provisional D-1). Couldn’t we have scheduled Butler instead?