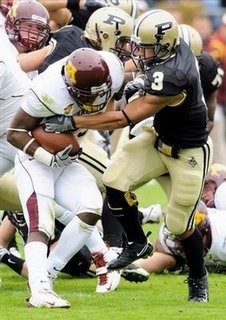 In light of a slow day Purdue-wise, here is a quick Boilermakings for a wider look at all things Boilermaker

Frank Duong up for Rudy Award

At Purdue we are required to hate all things Notre Dame. I take a little bit of a different view. I don’t mind Notre Dame’s past. You cannot argue with what that school accomplished before 1990. I consider their loss of respect to have occurred when Lou Holtz left the program in 1996. From that point forward the arrogance has grown while they have accomplished little to nothing on the field.

That being said, their tradition paved the way for Rudy, who lends his name to one of the more unsung awards in college football. The Rudy Award is in its second season as a postseason honor. It awards players who exhibit character, courage, contribution and commitment during their college careers. These are often walk-ons or former walk-ons who scratch and claw their way to playing time.

Purdue’s own Frank Duong is on the list as one of five Big Ten players nominated for the award. This is a great honor because I can respect guys like Frank. Jake Standeford is another guy who should have been up for last year’s award. I admit that I have a problem with motivation. If it is something I want to do I will practically kill myself to do it. If not, I am very apathetic. Guys like Frank and Jake are people who saw something they wanted to do, and went out and did it. I view Frank’s crowning achievement as his pick six against Central Michigan this season. Yes, he was an unheralded walk-on safety for a 4-8 team. For those few seconds though, he was on top of the world. He made a huge play and had 60,000 people screaming for him to get in the end zone. How many people would give everything they had to be the focus of 60,000 people for a few seconds like Frank commanded? That was the pinnacle of five years of hard work, and I thank Frank for that.

Women’s Vollyball in the Sweet 16

Tomorrow could be the biggest day in the history of Purdue volleyball in 26 years. In 1982 the lady Boilers advanced to a regional final in what was the best season in school history. Should Purdue top Hawaii tomorrow night in Ft. Collins, CO they will match that mark.

The Wahine are pretty good. They carry a #6 national seed into this game while Purdue is only has a #10 national seed. Hawaii is no stranger to the sweet 16 in volleyball as this is their 24th appearance in this round. They carry a 30-3 overall record into this round with the three losses coming to New Mexico State, UCLA, and Penn State. Penn State this year may be the greatest women’s college volleyball team ever assembled, so there is no shame in losing to them.

Where would Purdue have an advantage here? Hawaii has played only 10 matches off of the islands, so that’s a start. The two teams also met in the same place four years ago in the second round of the NCAA’s with Hawaii winning in straight sets.

I’ll be blunt. We’re facing one of the premier programs in college volleyball. A win would be a great step forward, but the volleyball team has already had a great year in drawing more positive attention to the university. I expect a loss, but a win would put the ladies into the Elite 8 nationally against either Florida or Stanford. We haven’t played either in over 13 years.

I went to Purdue in the greatest height of its women’s basketball tradition. We won a title my freshman year and were runner-up by a basket when I was junior. It is program that has accomplished more on a national scale than any at Purdue. That said, the loss last night at Valpo was embarrassing.

Part of the joy of not being officially associated with the athletic department is the ability to speak my mind without fear of reprisals. I do not have to ascribe to the party line BS of, "we just had an off night. Valpo is a great team, etc." I am sure the Valparaiso University Crusaders are a good team in the Horizon League. One of the greatest basketball players in the history of my high school, Cari Stover, was part of our back-to-back state championships and #1 national ranking in 1993. She played her college ball at Valpo, so I respect the program. They still have no business even competing with a program like Purdue.

This year we were on the short list for the women’s Final Four. We have an incredible amount of talent, and we need to freakin’ act like it. Just like I called out the football team for the horrible effort at Notre Dame, it is time to play better. You know you can, so do it.

Let’s face it, the past few years have left little reason as to why the top high school recruits should beat down the path to West Lafayette. We are reduced to hoping 1 or two four star guys choose us, and five star Bryce Brown is probably a tease. Still, new coach Danny Hope is at least being ambitious.

The fact we are even in the discussion for Brown, the nation’s #2 overall prospect according to rivals.com, is a huge step forward. We’re not Notre Dame. We’re not going to get 5 star guys on name alone. Many five star guys don’t work out anyway because they expect their ass to be kissed from day one (again, see Dame, Notre) instead of working and improving themselves.

To me recruiting is more about seeing how hard kids will work. Every year there are stories about how x 5 star recruit failed while y walk-on succeeded because he worked his butt off. Those are the type of kids that succeed at Purdue, and it is my hope that we have 13 players currently recruited that will work until they fall over to be better.

Four 3-stars, 7 two-stars, and 2 no-stars are what we currently have. It’s not the recruiting class that will cause the college football elite to crap themselves in fear. If they want ot work, though, they can play for me any day.

Personally, I believe recruiting is highly overrated but necessary. Ron Powlus taught us that lesson. What will happen with the 2009 recruiting class will happen on the field. Probably not in 2009, but in 2011 and beyond.

In college football news, it is the biggest news of the coming weekend. Everyone wants to give Tebow the nearly unheard of honor of a second Heisman.

Therefore, I designate Shonn Greene of the University of Iowa as the 2008 Heisman Trophy winner. He was a human badass unlike others (100 yards per game unlike others this year) this season That is why he gets my vote.