The Big Ten strikes back

Share All sharing options for: The Big Ten strikes back 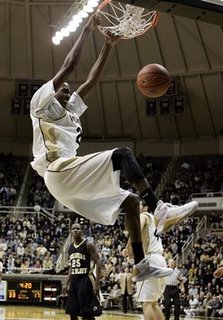 I just got home from one of the ugliest 48 point wins you will ever see. The news, however, is not really on Purdue. The Big Ten had a banner day in basketball. Really, we were a 3-pointer in a couple of games in the ACC/Big Ten challenge from winning that thing (Iowa and Illinois each lost by 2). That would have made for an even better week. Today, though, was a great bounce back day for the conference:

Northwestern 63, DePaul 36 (The Wildcats are 6-1 with just a loss at Butler, so credit for actually going to Hinkle.)

Even Indiana didn’t fully embarrass itself today against Gonzaga. This is all great news for a conference in need of some in either football or basketball. Right now you could argue that 10 of the 11 teams are at least threats at the moment to make the field of 65. Purdue, Michigan State, Ohio State, Wisconsin, and Michigan would definitely be in if making the field today, while Minnesota, Illinois, and even Northwestern would get some serious bubble consideration. Iowa and Penn State aren’t far away either.

I’ll likely look a little closer at each Big Ten team later this week, but this good news for us. Even in winning by 48 tonight it was obvious we still have quite a bit to work on. That’s fine though. I’d rather get our worst stretch of basketball out of the way now during a UAPB-Ball State-Indiana State stretch rather than in March. This wasn’t going to be a contest regardless of how great or how poorly we played. The bottom line is that we got out of it with what everyone expected: a very convincing win against one of the worst teams in the country.

Positives from the UAPB game:

Forcing turnovers and defense – 35 turnovers? Are you kidding me? Tyree Glass had the rare double-double of Points (18) and turnovers (11) for the Golden Lions. I know the talent differential was very large tonight, but 35 turnovers? They also only hit 11 shots from the field, and just four of those came inside the 3-point arc. For the longest time they were running on just 3-pointers and free throws. Credit goes to the defense for not even allowing the hint of an upset.

Starting Calasan and Johnson – I kind of like the idea of starting both and playing both at the same time. It was a bit of a necessity with Hummel out, Kramer, ill, and further depth compromised with Ryne Smith battling a weird skin infection. It worked well though. Chally had a nice double-double and JaJuan dropped 10 with multiple power dunks. I was very impressed with Chally’s effort on the offensive glass. Really everyone was good here with 22 second chance opportunities.

Marcus Green – The king of the Little Things on our team had a really good game. He did most of his scoring in the second half, but he seemed to be all over the floor when he was out there. Green is a deceptive player. It may not seem like he is doing much, then you look up and see he has 12 points and seven rebounds.

Rebounding – I will take any game in which we out-rebound an opponent. A 49-33 edge is exactly what should have happened in a game like this. Everyone got involved. Chris Reid even grabbed three boards. It should also be noted that we shared the ball well with 21 assists. LewJack had five, with a couple more botched because of turnovers. The same is true for E’Twaun.

The Bench Mafia -- Bobby Buckets has 8 with a pair of threes. Mark Wohlford hit a pair of free throws (and had a great hustle play to earn them). Even Chris Reid scored. it was a good night for everyone! I think I might have even played a few minutes if I had brought a jersey.

Negatives from the UAPB game:

Turnovers – As well as we played on defense, we had a large number of bad passes and stupid mistakes. At least four of our 22 turnovers were carries. This is becoming a growing area of concerned. We’re not playing disciplined basketball. Part of the reason is the large talent gap tonight. That can lead to sloppy play on our end as we try to do a little too much because of our abilities. E’Twaun Moore was especially guilty with 7 turnovers in addition to 15 points. We can get away with 22 turnovers in a game like this. Davidson in two weeks is a different story.

Free Throw shooting – Like the turnovers, we can get away with this now, but later it will hurt. It certainly felt like we missed more than 12 free throws. I could be over-exaggerating here, but we clanked a lot of shots.

3-point shooting – For the second straight game we were very cold from outside. We shot 6 of 23, but two of those makes were Bobby Riddell pleasing the Paint Crew with late bombs. When we made a commitment to get the ball inside to Calasan and Johnson we had mixed results. It either led to a basket, or the pass was knocked away. We’ve got to find our shooting touch before conference play begins. Fortunately 22 offensive rebounds helped.

We won by 48 points with maybe a "C" effort from the main rotation. That rotation of eight was even shorthanded since Hummel was out and Kramer allegedly was battling the flu. That should say volumes about the level of competition we were playing. I really do feel for teams like UAPB. They are working with minimal talent. They are working on a minimal budget. They have to come out night after night knowing this, yet they still play hard. I respect that.

Next we travel to Ball State. The Cardinals are still reeling from the John Thompson III debacle, but they are a feisty bunch. Getting a nationally ranked Big Ten team at home is the biggest game of their season. We should still win easily, but if we’re not sharp I would not be surprised if they made us sweat.