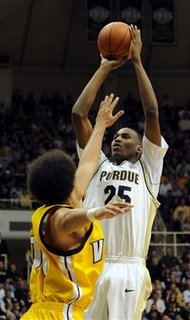 It certainly wasn’t pretty yesterday, but Purdue wrapped up the non-conference portion of its schedule with an 11-2 record. Yesterday’s 59-45 victory was not the best win in the history of basketball, but it was a win. We were down two of our regular eight players (Calasan played sparingly, so I count him as down) but even with only 75% of our normal lineup we won by 14. Another one of those eight players, Marcus Green, gave us virtually nothing that was measured on the stat sheet.

This was a positive win for those factors and more. Valparaiso played a very determined game. Remember, they made North Carolina, the consensus best team in the country, work a bit for a win last week. It is no surprise that their toughness let them hang around a little longer than expected. We weren’t shooting well, and players like Buggs, Diebler, and Igbavboa can give them a puncher’s chance if they are playing well. We also got unexpected contributions from Bobby Buckets and Ryne Smith.

Bobby Riddell’s game was also very important. To me, there is no reason he can’t play at least a few minutes at the point each night. He has demonstrated that he is more of an offensive threat than Chris Kramer is. He works hard defensively as well. We badly needed a spark yesterday and his two first half 3-pointers were that spark. He’s a smart, veteran player who has been through a lot in his career. It’s not like he hasn’t played a lot either. His minutes have been down the past two seasons, but it was necessary for him to play early in his career.

I’m not going to break this game down into positives and negatives like I have the past few games. Instead, I wanted to take a larger look at this team as we reach the de facto end of the first third of the season. First you have your non-conference season, then your conference season, and hopefully an extended post season of several games.

The biggest thing I have noticed about this team is that aside from the Duke game, we tend to play to the level of our competition. I attribute the Duke game to us having a poor night against a very good team. In a rematch I think we could give them a much better game. In the other 12 games we have generally played as well as our opponents have played. I consider Oklahoma a dead even game. One possession the other way changes the outcome against them. We had a great gameplan against a very good Davidson team and blew them out.

Conversely, we have played down in a lot of games this year. We struggled against Valparaiso, Indiana State, and IPFW. I believe part of that comes from the fact they are in-state teams. They are filled with players that probably wanting to play for Purdue or Indiana, but weren’t quite good enough to make it. Playing an in-state non-conference game, especially in a basketball crazy place like Indiana, is always dangerous because of that extra chip on their shoulders. They want to prove themselves in their one chance against the programs that dominate the state headlines. There is plenty of talent to go around in this state. If you can get a bunch of guys that flat out shoot the basketball, which is what many Indiana kids are, you can hang around against anyone.

Because of that, I don’t think it is any coincidence we struggled somewhat against our four in-state opponents. Is Valpo a threat to get hot in March and steal the Horison League bid? Absolutely! Can IPFW compete in the Summit league? Of course! Ball State and Indiana State are rebuilding, but it’s not exactly like success is foreign to them. Indiana has proven that it is home to the best high school basketball tradition in the country, so it is not a surprise to see those attitudes of hustle, shooting, and defense carry over to its smaller college programs.

Going back to ending the first third of the season for a moment; we’re probably right about where people thought we would be. Duke and Oklahoma are not bad losses. Oklahoma easily couldn’t be a loss anyway. Each win, aside from the Boston College one in New York, has been by 14 points or more. BC gives us an unexpected quality win for now, while Davidson gave us a nationally televised showcase to refute the Duke performance. Are things really that bad?

We have looked bad in some respects, but I would much rather look bad against IPFW and still win comfortably than look bad against Wisconsin and lose. The Big Ten season will be much tougher than expected, but we have plenty to build on. With that being said, here are my Big Ten rankings from bottom to top listing each team’s biggest strengths and weaknesses.

11. Indiana (5-7) – Strength – I am not one to relish Indiana’s great struggles this year. Yes, they brought it upon themselves, but as we have proven things can change back in their favor quickly. Right now their biggest strength is surprise. No one expects them to even compete in the conference, let alone win a game. Because of that, they will surprise someone.

Weakness – Rebounding, turnovers, shooting, defense, depth: essentially, all the fundamentals of the game of basketball.

10. Northwestern (10-2) – Strength – I think there is a huge gap at the moment between Indiana and everyone else. No one has really played well enough to be the head and shoulders favorite, but that is a good thing. From 1 through 10 this conference is very balanced and should make for some exciting games. Northwestern’s biggest strength is its patience in running that offense. They lull people to sleep with it.

Weakness – For the first time in a long time Northwestern is a legit threat in every conference game. Unfortunately, I think they lack the necessary depth to truly compete each night. They will win their share of games, but can they win at least 11 conference games to steal an NCAA bid? That’s what it would take. Fortunately, there are no bad losses to kill the NCAA dream for now.

9. Iowa (10-3) – Strength – Iowa has played a lot of guys plenty of minutes so far. They spread things around and play pretty tough defense.

Weakness - Iowa hasn’t really beaten anyone yet. They struggle away from Iowa City with the only win coming at the Citadel and in a tournament vs. Kansas State. I would still give them one more year.

8. Penn State (11-2) – Strength – This is another promising young team like Iowa. They played very well at the end of last season. They have a very strong trio of Cornley, Battle, and Pringle that can keep them in any game. They can also score plus take care of the ball.

Weakness – They have put up some big numbers statistically, but only a win at Georgia Tech can be considered a good one. The two losses came to good but not great Temple and Rhode Island. Everyone else was a creamy cupcake.

7. Wisconsin (9-3) – Strength – I place the Badgers here not because I think they are bad, but because they whiffed in all three chances for a good win. They remind me a bit of Ohio State last season. They are a very balanced team almost like our own that will win plenty of games.

Weakness - They also struggled with Long Beach State, Iona, and Idaho State. Something just doesn’t feel right, as they should be better than this. They still have one of the best home court advantages in the conference.

6. Illinois (12-1) – Strength – If 20 wins is the magic number the Illini are in a very good position for a return to the dance. They are more than good enough for a 10-8 conference finish that would easily qualify them. A win at Vanderbilt is also very nice. The free throw shooting, something that cost them dearly a season ago, is much better.

Weakness – They lack a truly dominant big man, but Mike Davis can easily grow into the role. This is a very dangerous team that will be looking to make a statement tomorrow night in Mackey Arena.

5. Minnesota (12-0) – Strength – They currently have the confidence of being unbeaten. They got a very big win by beating Louisville and controlling the game throughout. I remember another team last year that beat Louisville on a neutral floor to build its confidence.

Weakness – The next best win is over an awful Virginia team. They also open with Michigan State and Ohio State at home for a very tough beginning. Rebounding could also be a major issue as they do it by committee.

4. Ohio State (9-1) – Strength – They had probably the most impressive stretch by beating Miami, Notre Dame, and Butler in succession. Those are three really good wins to bank for March.

Weakness – In their first major test without David Lighty they got absolutely pantsed by West Virginia. The Mountaineers lost to Kentucky, who lost to Miami, so explain that. The Miami win was extremely lucky to as the Canes’ Jack McClinton was ejected early and they blew a big lead at home.

3. Purdue (11-2) – Strength – We’re incredibly balanced and, if you count Riddell, we can go nine deep on the bench. The way we play defense, especially against Stephan Curry, shows we can shut down anyone.

Weakness – We rely too much on the 3-point shot. Our rebounding has gotten better, but we have to attack the basket more. We haven’t played our best basketball yet outside of the Davidson game.

2. Michigan (9-2) – Strength – No one else in the country can claim two wins over top five teams. In fact, one of the two losses was essentially erased in that. Harris and Sims may be the most dynamic one-two punch in the conference. Harris’ overall profile have him, in my opinion, as the early Player of the Year in the conference.

Weakness – Can they be too confident? Did they blow their load early? It has been a very long time since Crisler Arena has seen event his much success. Much like us last year, there are questions as to how this young team will respond to success.

1. Michigan State (9-2) – Strength – I still think this team is the team to beat. They struggled early, but Kalin Lucas scares the crap out of me. Now that Raymar Morgan has Goran Suton back to help him down low they probably have the best frontcourt in the conference. That gives them a grind it out edge over everyone else.

Weakness – Once Suton gets back fully they can have five guys averaging in double figures. They can play inside-out. How do you stop that? Their only problem is turnovers. Free throw shooting in close games could be costly too.

I think it is entirely possible that six or even seven teams can get an NCAA bid this season. If the magic mark is 20 wins seven is entirely possible. Very rarely has a 20 win Big Ten team been left out. Illinois, Purdue, Michigan State, Minnesota, and Michigan are virtual locks to get to 20 wins if they continue to play as well as they have. Ohio State’s three big non-conference wins give them a little leeway where 18-19 might be enough. Penn State might get enough to get to 20. A conference this even also leaves some room for a team to get hot in Indianapolis and steal the automatic bid like Illinois nearly did last year. Only Indiana is truly out of it at this point.