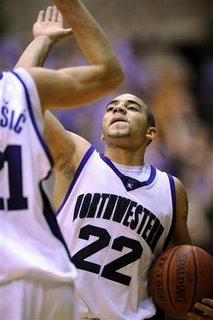 It has taken me awhile, but I think there is finally enough data to do a preliminary ranking of the Big Ten. This past weekend also showed me that my original thinking was a bit flawed. The Big Ten is a league that is better than most people think. Yes, we lost the ACC/Big Ten challenge again, but it was only by a 6-5 margin. Three of the six losses were hotly contested games, but it doesn’t help that two of them (North Carolina over Michigan State and Duke over Purdue) were blowouts involving the supposed best of each conference. It also doesn’t help that the Big Ten was the home team in each of those games.

I have also held off because I have struggled to come up with a creative comparison in which to theme the rankings. Last year’s metaphor of the Simpsons drew rave reviews. The Star Wars characters and Kevin Smith film characters saw fewer comments, but I still liked them. For this inaugural review it is time to dust off the old Dead Hooker in the Trunk theory.

For those unfamiliar with my Dead Hooker in the Trunk theory, it is quite simple. I believe that certain athletes or teams can become so famous and loved by their fans they can get away with most anything. Some even reach the rare status where they are forgiven even if they are caught with a dead hooker in the trunk of their car. For example: Shortly after winning the Super Bowl, Peyton Manning could have probably gotten away with having a dead hooker in the trunk of his car if caught in the city of Indianapolis.

As you can see, I have clearly put way too much thought into this. There also is not a direct correlation between ranking in this poll and what a team can get away with. A team more accustomed to success can be highly rated, but have less leeway because of said historical success. Conversely, a team can achieve a high ranking and have more leeway simply because there is very little historical success. With that in mind, here are my current rankings of the Big Ten.

DISCLAIMER: Off the Tracks does not condone the use of hookers, nor the killing of them. Off the Tracks is enough of a pimp that he has no need for hookers, dead or alive. If you do come in contact with a hooker, please do not kill them. Instead, give them the utmost respect in the form of a large tip or tasty, alcoholic beverage of their choice. These working girls need a break. If you come in contact with a dead hooker, please report the sighting to the proper authorities immediately. Remember, blogs are supposed to be fun. If you don't laugh and take this all too seriously, please consult your doctor.

1. Michigan (6-2) – I place the Wolverines at #1 for the moment because they have a pair of wins over top 5 teams. They just beat Duke by 8 after the Blue Devils spanked the preseason favorite in the conference by 16. This is also a very good win since it avenged a 15 point loss to the Blue Devils two weeks prior. Losing at Maryland isn’t bad, but it would have been nice if the Wolverines could have gotten it and given the Big Ten the Challenge. The most curious result is a narrow 2 point overtime against… Savannah State (2-28 in 2005-06). The UCLA and Duke wins give them the best profile.

Number and Frequency of dead hookers allowed: Two at one time – Michigan basketball hasn’t mattered for 10 years. This is a major step forward and they have to be in the discussion of conference favorites. The fact they have had some previous success prevents them from multiple instances of 1 hooker, but the good times can still roll at Crisler Arena. They even get some Cristal.

2. Ohio State (5-0) – The Buckeyes had a great week last week with a pair of wins over top 25 teams away from Columbus. The Miami win came with the Hurricanes missing two of their best players for most of the game, but the Canes still blew a big lead. Butler and West Virginia provide some good tests at home before conference play begins, which might see OSU remain undefeated until then.

Number and Frequency of dead hookers allowed: None – It’s Ohio State. They are going to yet another BCS bowl and played for the national title two years ago with Oden. Plus, who knows what they already get away with if you listen to Maurice Clarett.

3. Illinois (7-1) – Last year Illinois had some serious head-scratching losses before conference play even started. So far they have avoided that. Only a 2-point loss to Clemson at home prevented them from being unbeaten (and the Big Ten winning the Challenge). They have a nice road win at Vanderbilt and just blasted Georgia, so they are not bereft of wins over major conference opponents. Michael Jordan’s son also plays for them. He has the money to buy the entire team out of any legal trouble should he want to.

Number and Frequency of dead hookers allowed: One at one time – Based on the Jordan factor and last season’s struggles.

4. Purdue (6-2) – This feels about right. We shouldn’t be #1 because of what happened against Duke. We’re also not playing our best basketball right now. Still, we’re a huge free throw discrepancy away from beating Oklahoma. If that game had ended as a win we could chalk up the Duke loss as simply a bad night. Unfortunately, we don’t get another shot at a really good win until much later. The questions will really arise if we lose another non-conference game. That includes Davidson, the only good team we have until conference play begins.

Number and Frequency of dead hookers allowed: One at one time – Based on the rapidly disintegrating goodwill from last year.

5. Northwestern (6-1) – Yes, these are basketball rankings. The Wildcats had the most surprising win of the Challenge by knocking off previously unbeaten Florida State. FSU then went and beat Florida last night. The only loss came at Butler, which is far from a bad loss especially since they were brave enough to go to Hinkle. If the Wildcats can win their remaining four non conference game and somehow snag 10 wins in a somewhat down Big Ten they might finally break the NCAA drought. Those remaining four non conference games are Missouri-Kansas City, at Stanford, SMU, and Chicago State. That would mean two good non-conference wins (Stanford and FSU). I don’t think it will happen, but the fact that Northwestern can dream of it is a huge step.

Number and Frequency of dead hookers allowed: Two separate instances of one dead hooker – It is Northwestern after all, where an NIT bid is a huge triumph. I don’t expect them to finish this high, but they deserve a reward.

6. Minnesota (8-0) – Yes they are 8-0, but the toughest win was by a point at Colorado State. Hopefully the winning shot didn’t occur after the buzzer, as many Purdue fans remember how sketchy the timekeeping is in Ft. Collins. A game against Louisville on December 20th will give us a good indication of how good the Gophers are. I think they can definitely be an NCAA team, but I question if they can legitimately threaten to win the Big Ten. Since they are another team that has been mired near the bottom for awhile they deserve an extra bonus. Number and

Frequency of dead hookers allowed: One at one time – We’ll call it a test for now to see how they handle the situation.

7. Michigan State (5-2) – I’m very disappointed in the Spartans so far. They have whiffed badly in two chances against the ACC (what is it with Maryland vs. the state of Michigan, anyway?). The North Carolina game made our effort against Duke look good. Not only that, they have struggled against teams like IPFW and Bradley. They get another shot by playing Texas on December 20, which is the next big day for everyone in the conference. Until then, they are on probation.

Number and Frequency of dead hookers allowed: None – And they would probably get in trouble for even looking at a hooker.

8. Wisconsin (6-2) – This is another team that has not impressed so far. They are the defending conference champs, but they haven’t played up to even lowered expectations after losing their core to graduation. Iona, Long Beach State, and Virginia tech were probably a little too close for comfort. They weren’t even close against UConn. They host Texas on December 23rd in what would be a very good win if they can get it. Last year’s last second win in Austin will be fresh in the Longhorns’ minds.

Number and Frequency of dead hookers allowed: None – They can still solicit one, but I don’t know if I would want to in Madison.

9. Penn State (7-2) – The Nittany Lions probably should be 9-0. They got a very good win at Georgia tech, but lost to Rhode Island and Temple. The Temple loss came at home too. They have very little margin for error if they want to make the NCAA’s, so both losses will likely hurt them come March. They don’t even have a good game left before conference play to erase either of them. They will probably be in the NIT, but not the NCAA’s.

Number and Frequency of dead hookers allowed: One at one time – Simply because the NIT is an improvement and Penn State basketball isn’t a power.

10. Iowa (7-2) – There are no bad losses, but only Kansas State is marginally close to a good win. They’ve struggled against teams they shouldn’t struggle against either (Texas-San Antonio, Oakland). In the Big Ten if you struggle with a State-City team you’re in trouble. That might be a step below a Directional State opponent, but still above Random Name State. The Hawkeyes will now tour their home state before opening the conference.

Number and Frequency of dead hookers allowed: None – The legal troubles of the football team have the Iowa City police keeping a close eye on everything. Better to be safe than sorry.

11. Indiana (4-4) – Here in Indianapolis we have been beaten over the head with a number of articles saying, "Well, they play hard". I don’t doubt that. It is something that will pay dividends in the future. Tom Crean is doing things the right way and I really do think the Hoosiers will be much better off in 2-3 years. For now, expecting them to compete night in, night out is a stretch. Playing hard will gain them an upset or two this year (hopefully not in West Lafayette), but they are going to get beaten up most nights.

Number and Frequency of dead hookers allowed: They can’t even look at a hooker. The NCAA is watching them too closely. They probably have to go to church after each practice now and Tom Crean is relegated to reaching recruits via carrier pigeon. As for the hookers, if they hit their free throws and don’t turn the ball over I’d give them an edge.