Between a Brock and a hard place

Share All sharing options for: Between a Brock and a hard place 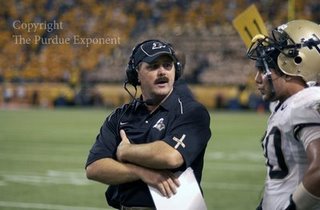 I would like to thank Brock Spack for accepting the new head coaching job at Illinois State yesterday. If anything, it gives me something to write about on a rather slow news week because of finals. That aside, it is obvious an important turning point for the football program.

The 2009 Boilers will now look almost entirely different from a coaching standpoint than the previous 12 incarnations. That much was already obvious with new head coach Danny Hope and new offensive coordinator Gary Nord. With Spack gone, we have a new defensive coordinator for the first time in 12 years. That’s a turnover of the top three positions in just one season. While that is pretty common at a major college program accustomed to some success coming off its worst season in 12 years, it is uncommon for only one of those spots to be open as the result of a firing. Only offensive coordinator Ed Zaunbrecher took the fall for our dismal 2008 season. Tiller and Spack left on their own accord.

The news of Spack’s departure leaves me with mixed emotions. I am surprised since he is a "Purdue guy" with very strong ties. It’s not a surprise because he clearly was seeking a head coaching job. I would argue strongly that had Tiller decided to leave 2-3 years ago he would currently be Purdue’s head football coach. This is a position he has wanted for a long, long time, but unfortunately the play of the defense, his bailiwick, from 2005 onward likely cost him the job.

That poor play will also tarnish what was a pretty good legacy. Of the 27 Boilermakers currently on NFL rosters 17 are defensive players. Of those, 16 were players that Brock Spack personally coached while at Purdue. Seven of those guys come from the 2003 defense that was one of the best in the nation during his tenure. That is what makes the sudden dropoff so stunning. We graduated a ton of guys from that 2003 defense, but we still had a good one in a "rebuilding year" of 2004. It was 2005, when we had all the pieces in place for an even better defense, when things absolutely fell apart.

I’m still not sure what happened that year. Ray Edwards and Bernard Pollard were part of it. Those two had a "me first" attitude not often seen in our defense. I lost count of how many times Pollard celebrated a tackle after a 15-20 yard gain like he just personally won the Super Bowl. Sure he was a big hitter, but when you make the tackle long after the first down you have no reason to celebrate. Spack failed to corral those guys' attitudes, and the team suffered as a result.

That season was also the year that our defense seriously fell into the trap of simply refusing to make any in-game adjustments. That has been the biggest problem of the past few seasons. We still have decent raw talent on the defensive side of the ball, but it absolutely maddening to see teams make the same plays time and time again while we flat out refuse to adjust to them. I have been screaming about this since I started to write Off the Tracks before the 2006 season, and it is still an issue.

Ultimately, that lies with Spack. No matter what he has done for Purdue over the past decade plus, he is the one responsible for what has happened defensively the past few seasons.

That said, I am a little discouraged because going into 2009 the defense looked like it was going to become a major strength. From the bottom point of 2006 when we couldn’t stop the French army, we improved to 64th nationally in total defense this past season. This was actually one spot ahead of Oklahoma (who has had a decent year), and several spots ahead of teams like Oregon, Oklahoma State, and Texas Tech. The defense really was pretty good this year, especially when you consider that our offense couldn’t keep them off the field.

While I wouldn't necessarily bet on Brock Spack definitely returning to Purdue, there is something definitely worth betting on. The NFL playoffs are just around the corner. I'm not much of a gambler, even if I am in the top four of the Big Ten blogger's pick 'em contest. If you do feel like dropping some coin on a little wager, however, feel free to head over to BetUs.com. You can take advantage of plenty of Superbowl betting at any time.

From the second half of the Notre Dame game forward the defense played extremely well. I, like many, ripped them for quitting in the second half of that game. They played more than well enough for us to win games against Penn State, Ohio State, Minnesota, Oregon, and Michigan State only to have the offense let them down. The best part is that most of that unit will be back.

That is why it is critical for our new defensive coordinator to keep this momentum going while figuring out that we are indeed allowed to make in game adjustments. Virtually our entire secondary on the two deeps (if Torri Williams decides to pursue a medical redshirt) returns with starting experience. We have three very promising linebackers (Joe Holland, Chris Carlino, Nickaro Golding) returning with three years of eligibility remaining. If the long-awaited Jason Werner plays we’ll have depth too. Mike Neal and Ryan Kerrigan are very good building blocks along the defensive line. That is the only area where we will be looking for new starters. Players like Kawann Short and Kris Cooke are promising replacements.

There is also the question of recruiting. One of our top targets, Jordan Barnes, already mentioned that he is disappointed that coach Spack left. We are in a critical part of our recruiting cycle. Several of the better players we have been looking at are on the fence and were being courted by Spack. We cannot lose the headway that head and coach Hope were making, especially in an area that has been a deficiency for some time.

Whoever replaces Spack has to keep the defense improving. It is our one hope for having a good 2009. If the defense stays the same or even improves a little I am confident that our offense can make enough positive strides to get us back in contention for a bowl game. If it takes a step back under a new coordinator wins will be hard to come by. I am already looking at games against Toledo, Northern Illinois, and Indiana as likely wins. Oregon, Notre Dame, Michigan, Wisconsin, Illinois, Northwestern, and Minnesota are all possible wins, but we obviously must play better.

I wish Brock Spack the best in his new pursuit. He leaves Purdue in a very interesting position. We would not have had as much success as we have had without him, but we may not have been as bad the past few years without him. He is still young enough to return as a head coach somewhere further down the line, as I am sure he will be first in line if Danny Hope doesn’t work out. Until then, his primary responsibility is the Illinois State Redbirds.