Share All sharing options for: And so, a tough year ends... 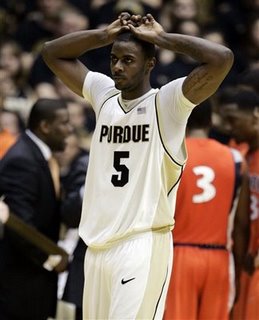 2008 has not been a good year for me on any front. Last night was just a microcosm of that. I was excited all day to be covering a game for my Kats then following it up with the tape of the Purdue-Illinois game. I had little luck in avoiding the Purdue score as they kept announcing it at the Kokomo-Westfield game. As it turns out, both the Boilers and Kats ended up finishing gut-wrenching overtime losses at about the same time.

What a fitting ending to a craptacular year.

These games tend to affect me too much. I haven’t even watched the tape of Purdue yet (and doubt I will now) but it give me that sinking feeling in my stomach. I actually had trouble sleeping last night from both losses. With Kokomo, they didn’t even seem interested until they were down 18 and turned up their defensive pressure to make a furious comeback. They actually took a 1 point lead with 13 seconds left before fouling and letting Westfield tie it from the line. Purdue was in a similar fate, as they announced that the Boilers were ahead by a point with seconds to go.

In a way, I feel like I don’t need to watch last night’s tape. I think I watched the same game only at the high school level. My Kats shot only 61% from the line while Purdue shot 55%. Kokomo was 4 of 12 from 3-point range, Purdue was 4 of 16. Both teams shot worse than 45% from the field. The result was even eerily similar on the scoreboard. Kokomo’s game was 73-68 while Purdue’s was 71-67. It was my first time seeing Kokomo this year, but both teams clearly are better than they are playing right now.

In talking with Kokomo coach Brian McCauley last night he mentioned how his guys have to realize they can’t just flip a switch at game time and expect to win. They were a top 10 team to start the season, but have now lost four in a row when they probably should have won three of those four. Doesn’t this sound an awful lot like Purdue at the moment? We’ve been in the top 15 all year, but we feel like we can just turn it on at game time to win. It doesn’t work that way.

This team has to start shooting better. The GBI forums are saying Painter was outcoached last night, but if we just shoot better and hit our free throws we win easily. The free throw woes are the most infuriating, but when you’re not hitting from the field it carries over to the line. There is absolutely no reason this team should ever shoot worse than 75% from the line in any given game. JaJuan Johnson gets it with an 8 of 10 night, but even one of his two misses came at a critical time as it would have won the game.

If you look at the stats last night we clearly lost the game from the line. We took away the 3-pointer (one of Illinois’ strengths), but they did exactly what I warned about in the preview. They went inside to Tisdale and Davis to pound away. They were 14 of 29 from the field (nearly half their shots). We let Alex Legion, a guy playing in just his 4th game of the season, have a season high 12 off the bench. We won the battle on the glass despite a size disadvantage and one of our main post players only playing four minutes. This was offset by the fact that Illinois, a turnover-prone team, had just 6 turnovers.

This was an incredibly frustrating loss because if we simply shoot the ball better or force more turnovers (things we do often) we win. Now we’re down a game in an already tight Big Ten race before it even starts. We cannot afford to lose at home if we’re going to win this conference. We have to shoot better and we have to force more turnovers. The fixes are small, but in a race like this even small fixes can mean the difference between victory and defeat. We haven’t proven we can fix those things yet. Until we do, we are not ready. I hope this serves as a wake up call. Unfortunately, we have been hitting the snooze button for awhile.

We can still win this conference. No one is going through it undefeated this season. Shoot, we still even control our own destiny. The absolute best case scenario of us running the table over the next 17 games would give us at the very least a tie for the championship since we still have another game against Illinois. As tight as things are, four or even five losses could get a share of the title. We cannot drop another home game though. We have to win 8 straight at Mackey and get at least six on the road. We are capable of doing that, but we have to shoot the basketball better.

As we wrap up this terrible year I wanted to hit some of the highlights of the past 365 days in Purdue athletics. Football hasn’t helped us out much, but there were some major steps forward all-around.

I wrote then that this game simply announced we had arrived at the mountain to begin climbing it again. It was the first of many signature Big Ten victories for this team.

February 9th – Purdue 72, Wisconsin 67 – Our first major road victory in many years. I was actually in West Lafayette that day and wish I had stayed to watch the game at Harry’s or something. The fact the student met the team at the airport that morning was amazing. We were no longer the Baby boilers.

March 9th – Purdue 58, Illinois 56 Women’s Big Ten Tournament final – I have to give the ladies some credit here. This may have been the grittiest women’s team in Purdue history. They were down two of their best players all year and needed a Big Ten tournament title in order to keep a streak of 14 straight NCAA appearances. They did just that with Kiki Freeman’s buzzer-beater. They even justified their entry by winning a game in the tourney.

March 20th – Purdue 90, Baylor 79 – So much for being a grind it out team. Coach Painter lets the Boilers run and we blow past Baylor playing their style.

May 18th – Purdue softball makes history – The women’s softball team made its first ever NCAA Tournament appearance in 2008 and managed to win a game in a loaded UCLA regional. Purdue was the least experienced team by far, but used the pitching of Dana Alcocer to beat Cal State Fullerton 4-2 after losing its opening game to Nevada. The Wolfpack then knocked the Boilers out 2-1 in the next game, but Purdue’s 35-23 season was easily its best. The Boilers also won spring invitationals in Waco, Texas and Greenville, NC. The NCAA win over Cal State Fullerton actually avenged an early season 5-0 loss to the Titans.

May 24th – Purdue baseball finishes as runner-up in Big Ten Tourney – A 32-26 season may not sound like much, but the baseball Boilers finished one of their best seasons in history by falling just short of winning the automatic bid to the NCAA Tournament. The Boilers set a school record for conference wins with a 21-10 Big Ten mark. It would have been good enough to win the conference in several recent seasons, but Michigan had a top 15 program for most of the year and cruised to the title. Purdue was runner-up to the Wolverines for both the regular season and tournament titles. If not for a nine game losing streak to start the season in which Purdue lost four one-run games to nationally ranked Baylor and Kentucky the Boilers might have squeezed an at large tournament berth. Purdue has still only made one NCAA baseball tournament appearance.

Mid-August – Incoming freshman diver David Boudia and senior javelin thrower Kara Patterson compete in Beijing – Boudia very nearly came home with a medal while Patterson was the first Purdue woman to compete in an individual Olympic event. It should also be noted that former baseball player Mike Dursmaa played for the Netherlands’ team.

It was one of the few highlights of the season, but Kory Sheets’ big run against Central Michigan gave coach Tiller the Purdue record for wins as a head coach. There is no word on if the Central Michigan safety still randomly falls down when thinking about the move Kory put on him. The run also gave Sheets Purdue’s all-time touchdowns record. I also include a bonus video of the high point of the football season. If this Oregon game turns out differently I think Purdue wins 7-8 games.

November 22nd – The Bucket returns by force – I know it was a down year, but it was very satisfying to send coach Tiller out in style by thoroughly beating the Hoosiers 62-10. Any time you can hand a historically bad program its worst loss in school history as described by its own fans you have achieved something. The fact that it was a major rival makes things even better.

December 28th - Drew Brees passes 5,000 yards in season, leads my fantasy team to its second consecutive championship - Yes, I have become that guy that talks about his fantasy team. I don't care. Last year it was the New Orleans Looters and this year it was the Bitches Ain't Shit (but hoes and tricks). Mr. Brees has been my QB for three straight years now. Once again, He led me team to a championship. It would have been three straight if Adam Vinatieri hadn't kicked a meaningless field goal in a Monday night game against Cincinnati two years ago to knock me out of the first round of the playoffs (as the number 1 seed) by one point. Special thanks go to Kyle Orton (my backup QB), Dustin Keller (tight end with Dallas Clark), Jacques Reeves (a contributor as a random defensive player), Shaun Phillips (the same), and Anthony Spencer (I had the Dallas defense) for their contributions to this title.

I hope everyone has a safe and productive 2009. I will not be sad to see this year go, as it has been on of much personal adversity. I am very thankful to have this blog and the wonderful athletes at Purdue as a distraction from everything. I am very thankful for you readers as well. I admit that the Illinois loss last night made me feel like this was a waste of my time because I felt the Big Ten dreams were flushed away in the first game. It is never a waste of time though with you readers. Everyone, please celebrate safely tonight. I already have the Mt. Carmel Copper Ale (perhaps the finest Ale I have ever tasted. Even better than Breckenridge Brewery Avalanche) cooling in the fridge and I’ll crack open a cold one to you all at Casa de T-Mill tonight.