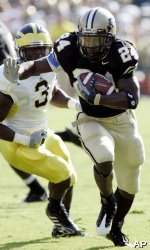 I’ll try to keep this brief as I have a party to go to tonight, but that was an incredible on an incredible day of football. Not only did Purdue erase TWO 14 point deficits, but we won on day when Indiana and Notre Dame each lost in dramatic fashion. It was made even better in our household as Miami won on the road in overtime against Virginia. It all made for a great day of college football, which was sorely needed.

This is the kind of boost the Boilers needed today. It may have been a pair of 2-6 teams going at, but damnit if it wasn’t the most entertaining game of the season. There are so many positives to take out of this game, even if was only over a 2-7 Michigan team in the midst of its worst season in 40 years. Once Threet's final pass fell tot he turf you could feel the stadium release as for one week the fans could enjoy themselves again. I know i collapsed into my seat. There were also a number of smiles as I left hte stadium. That's huge right now, and I'll take it.

Positives from the Michigan game:

It was a win – This is the biggest one for me. We finished a game with more points than the team we were facing. For the first time since the Central Michigan game (thank you, Chips, BTW) I walked out of the stadium happy and felt like my Saturday was somewhat fun. The way we did it was even better. I can’t remember the last time Purdue survived two 14 point deficits and a punt return TD yet still won. This was the wild, guns blazing on both sides shootout we haven’t seen in some time. Plus we hung 48 points on Michigan. If you take away the two garbage time touchdowns in last year’s game we hadn’t scored 48 points in the last four games combined against the Wolverines.

Kory Sheets – The kid is a warrior. I don’t even know the last time we have a 100 yard rusher against Michigan unless it was Montrell Lowe in the 2000 game. At this point there are not proper adjectives to describe my high esteem of Mr. Sheets. He played his heart out once again and it was wonderful to see his monster performance rewarded with a W. He will make an NFL team very happy in a few months as a mid-round pick.

Justin Siller – It sucks for Joey Elliott, but Mr. Siller had a very successful audition to be the 2009 starting quarterback. One week of practice did wonders as he really didn’t force anything and gave us an element with his legs on third down that was much needed. I met up with Dave and his posse from Maize n’ Brew after the game and they were very impressed with Siller as well. I think Siler is the starter from now on, but Curtis Painter deserves the start against Indiana even if both play.

Coaching staff – The fake punt was big. I think it was even set up more by the high snap on the previous punt. That was excellent execution by the line to open a hole for Heywood and give us a huge boost. The hook and ladder play… holy crap! Whoever called that had some massive stones considering where it came in the game. That both calls came in the fourth quarter of a tight contest shows that the coaches may have figured things out in the last couple of weeks.

A second praise of the coaching staff goes for the way we erased the second 14 point deficit. We used the halftime break as a defensive stop, which is what any good player of NCAA Football on Playstation will do. Coming out and scoring on the opening drive of the second half was a huge momentum swing in our favor. Once our offense got rolling there we were virtually unstoppable the rest of the way.

Greg Orton – This was a much needed good game from the senior. The touchdown was big, but his catch down the sideline on the first drive of the second half was the biggest catch of the year. I thought at first he went out of bounds and came back in. That was why I thought the play was reviewed. It happened right in front of my section and he easily got the foot in bounds. How he executed the lateral to Tardy on the winning play I will never know.

Anthony Heygood – I haven’t talked enough about Anthony this year. He has had a solid year on a defense that has been all over the map with its play. I really hate to see this kid leave. Today he had several good stops one-on-one, and that is especially telling since we struggled to tackle most of the day. In the little things department, I like how he had the presence of mind to shift the ball to his left side near the end of the fake punt run. He hasn’t carried the ball much the last few years, but that was a smart play because then any fumble caused by the tackler goes harmlessly out of bounds.

Ryan Kerrigan – Kerrigan actually led us in tackles, sacked Threet three times, and forced a fumble. He had 10 tackles total (seven of them solo) and a pass breakup too. Ladies and gentlemen, we have our next great defensive end at Purdue and he’s just a sophomore.

Negatives from the Michigan game:

Special Teams - I have never been so terrified every time we have kicked the ball as I was in this game. After the missed (blocked?) extra point I was scared even though there were 20 seconds left because we had to kick off to them. Michigan had a big mistake on one punt return and almost one on the first directional kickoff, but other than that it was a day to say a prayer every time we kicked be it a punt or kickoff. Michigan had 272 return yards and just 300 of total offense! If we could have just held them on kicks we win this game by three scores easily, but we kept giving them a short field.

On the other hand, Chris Summers proved once again you do not come to his side of the field on a return. Chuck Norris is back.

Run defense – Brandon Minor turned into Armando Allen. We didn’t have an answer for him as he had more than half of the Michigan offense. He didn't have a ton of yards coming in and was a backup most of the season too. If it wasn’t for him and the return Michigan wouldn’t have moved the ball at all.

Offensive line – Kory had to earn his yards today, as at least five of his carries went right into a wall of defenders that had busted through. All told the group wasn’t bad as Siller didn’t get sacked, but Kory took quite a beating on the day.

I can now go to East Lansing and at least feel like we’re still playing for something. I recognize that part of the day comes from the fact that Michigan is awful this year. Still, we got the offense going and it looked really good at times. Siller showed a ton of improvement after one week of practice and could give us at least a puncher's chance next week.

We cannot look at this as needing to win three game for an improbable bowl bid now. Instead we have to look solely at Michigan State. Go up there and win not to make a bowl, but to end the ranked team losing streak. After that we can then worry about Iowa and who knows what will happen. I am not saying we have a great chance to win next week, but at least I feel like we have a small one now. That’s all you can ask for.