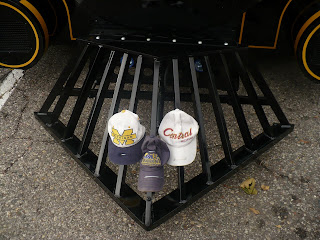 I am still coming to grips with the fact that my college football season will be over in 13 days. Hopefully it will be over with the Old Oaken Bucket back safely in the Mollenkopf where it belongs. The seniors deserve it and Tiller deserves it. With Iowa beating Penn State in an upset I was hoping to see the Hawkeyes at #25 this week in order to have a bonus chance at a ranked team, but we won’t be so lucky. I’d like a win in Iowa City to save a little face, but the more important game is the Bucket game now. We must take it back by force to end this poor season on a positive note. It will be a very long winter indeed if we have to leave the Bucket in Bloomington for another year.

With Indiana and Purdue now both ineligible for the postseason The Big Ten is in danger of not fulfilling its bowl obligations should it get a second team into the BCS. Illinois is in danger of joining Michigan, Purdue, and Indiana now as well. Though I’ll soon be switching over to full basketball mode, there is still some football left to be played.

11. Indiana (3-7, 1-5) Result: Wisconsin 55, Indiana 20 – I almost feel sorry for Indiana. Penn State is going to vent next week and the Hoosiers will be the victims of that venting. That will set up an epic bucket game where the loser is guaranteed of finishing dead last in the conference. This is a far departure from last year, which was the second time that both teams went bowling int eh same year. It should be noted that Indiana "Defended the Rock" against the easiest home schedule in the country to the tune of 3-5. Ironically, one of the wins came against the only ranked team the Hoosiers faced at home (Northwestern), though Michigan State, Ball State, and Wisconsin were ranked at one time.

10. Purdue (3-7, 1-5) Result: Michigan State 21, Purdue 7 – The Enlightened Spartan was pretty dead on in Purdue just being a bad football team. Still, we were a bad football team that was once again about 2-3 plays away from making it very interesting against a good one. Those plays were a terrible pick six, a long pass that set up a TD, and a shanked punt that set up another TD. The first two Michigan State scores came from our mistakes, so this game was really much closer than it looked. This game was a lot like the games against Minnesota, Ohio State, Penn State, and Oregon in that we were agonizingly close. The obvious question is how can we make those necessary plays next year to change things around?

9. Michigan (3-7, 2-4) Result: Michigan 29, Minnesota 6 – Week one of Michigan being the team that gets to piddle on everyone’s parade was a rousing success. Michigan State fans were already grousing about the possibility of having to cheer for Michigan in two weeks because it would help the Spartans get to Pasadena. Northwestern is a winnable game in the home finale if the Wolverines can keep play well, and you know they would be motivated to stick it to Ohio State and cost the Buckeyes a craplaod of money by knocking them from an at large BCS berth.

8. Illinois (5-5, 3-3) Result: Western Michigan 23, Illinois 17 – The MAC gets its fourth pelt from the Big Ten this year, and this one may be the most savored as it came against one of the preseason favorites. We can now officially end the "Ron Zook is the savior of Illinois football" talk. Ohio State proved yesterday it has "the look" of being the most feared team on the road in conference play, so I definitely like the Buckeyes this week. Juice Williams does possibly the least with the most passing game in the Big Ten, and people are figuring him out.

7. Minnesota (7-3, 3-3) Result: Michigan 29, Minnesota 6 – I would love to have another chance at Minnesota now that Siller has had a couple of weeks to be more familiar with the offense. The Gophers are quickly a sinking ship and both Wisconsin and Iowa are gaining enough confidence to beat them the next two weeks. If Purdue had any kind of an offense, and maybe even if Painter doesn’t get hurt, would have the Gophers on a three game losing streak right now.

6. Northwestern (7-3, 3-3) Result: Ohio State 45, Northwestern 10 – Mrs. T-Mill and I were discussing on the drive home last night how the Big Ten is a really bad league this year outside of the top three. The top three of Penn State, Ohio State, and Michigan State have exactly one loss to the rest of the conference, and that is Iowa’s last second win last night. Northwestern here is just the prime example of the rest of the conference. They are a team that bulked up in the non-conference schedule and shook out a couple of wins over a crappy rest of the league. I believe you could restart the season right now and the bottom eight would shake out in a different order simply because a couple of things would go differently in those "bad team" games.

Purdue absolutely could beat Minnesota or Northwestern if given another chance. Michigan could beat Purdue or Illinois. Illinois could beat Wisconsin or Minnesota. Minnesota could beat Northwestern or Michigan. Only Indiana, who has gotten blown out in several of these games is probably the worst of the bunch. Purdue is only suffering the most because it played one of the most difficult non-conference schedules of this bunch. It is no coincidence that of this bottom group of eight, Illinois, Purdue, Michigan, and Indiana did the worst out of conference. They are the four teams that actually played teams with a pulse.

5. Wisconsin (5-5, 2-5) Result: Wisconsin 55, Indiana 20 – The Badgers are another bad team with a good record. They will get bowl eligible with a win over Cal Poly in two weeks, but there should be some kind of special bowl for a team that was in the top 10 at one point, but only finishes 2-6 in the conference and gets to bowl eligibility by beating up on a 1-AA team on senior day. Even Wisconsin’s best wins of Illinois and Fresno State are not that great.

4. Iowa (6-4, 3-3) Result: Iowa 24, Penn State 23 – Iowa staked its claim to being the best of the bottom eight with its win last night. The Hawkeyes were very impressive and showed a lot of poise in topping a team that many were already putting in the BCS title game. They did what good teams do, and that is make the Nittany Lions pay for their mistakes. Purdue did not do that at Michigan State yesterday, and that is why we lost. Now wins over two more bottom eight teams may put them in another New Year’s Day Bowl. Like many in the bottom eight, they lost their only tough non-conference test to Pittsburgh.

3. Michigan State (9-2, 6-1) Result: Michigan State 21, Purdue 7 – Here is what I saw yesterday. I saw a Michigan State team that may be a little too sure of itself. It is 9-0 against the bottom eight and its weaker non-conference opponents. What is the best win? Notre Dame? Northwestern? Iowa? Those teams are good, but not exactly top 25 caliber. The Spartans are 0-2 against the really good teams it has played and failed miserably in its one chance against the other top dogs in the conference. A team as good as many of its fans thought they were yesterday wouldn’t have struggled so much against a really bad Purdue team. The Boilers did make them work yesterday. We just shot ourselves in the foot like we have too much this year. Michigan State will impress me if they win in Happy Valley two weeks from now. Until then, they are a very good, but not great team. They simply haven’t stumbled against bad teams like the rest of the league.

2. Ohio State (8-2, 5-1) Result: Ohio State 45, Northwestern 10 – Ohio State, on the other hand, did what a great team is supposed to do when facing an inferior one. They invaded Evanston, took over the stadium, and spanked the Wildcats like it was the 70’s all over again. Illinois will be up for this week’s game, but I fully expect the same to happen. When this team is on they are among the best in the country. They weren’t on at USC and just made one costly mistake against a great Penn State team.

1. Penn State (9-1, 5-1) Result: Iowa 24, Penn State 23 – The obvious comparison is that is like 2005. Penn State blinked and though they are the best team in the Big Ten still, it will cost them a shot at the national title with one last second loss. They could still back into the title game like Ohio State last year, but as we’ll see in the blogpoll ballot below they are now in the back of the line of 1 loss teams. All hell would need to break lose, including a scenario where UTah sneaks into that title game as well. Still, how is this loss different from USC's at Oregon State.

Nationally we are officially on the tightrope. The national championship game is officially settled until Texas Tech or Alabama loses. Texas Tech keeps winning playoff games, and now faces one more in two weeks against Oklahoma. Then Missouri in the Big 12 title game won’t be easy. The Alabama-Florida SEC title game may actually be an official national semifinal, but rivalry games against tough opponents the week before that game could spoil it.

The rest of the poll is widely open to interpretation at this point. Feel free to comment in the comments