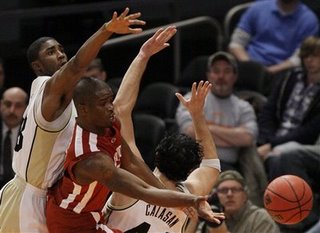 I just took a moment to read the GBI boards. There are several threads crying out about the injustice of the foul discrepancy. They generally go along the theme that we got beat because it was 8 on 5, they mention the 46-5 free throw difference, and even one creative post called a 3rd foul on Bobby Riddell despite the fact that he only moved from the bench on timeouts.

It is a shame that the fouls and resulting free throws will be the story of this game. It was a classic, hard fought college basketball contest between two very good teams. If we played them in a seven game series it could easily go all seven games. The fans over at Crimson and Cream Machine were very gracious in victory, as was I in defeat as I spent the afternoon between this site and theirs. The Sooners are a very good team. Though the fouls were a big difference, we still had plenty of chances to win that we let slip away.

Nemanja Calasan – Chally nearly pulled us out of this one with his big 3-point play after an offensive rebound at the end of regulation. We certainly don’t count on 20 points per night from him. All eight rebounds, especially the four of the offensive variety, were huge. He played some of the big minutes that JJ will need to play later on. As it was, he and JJ each had four fouls most of the second half and we still did a good job of containing Blake Griffin. This was simply a fantastic game from Chally.

E’Twaun Moore – We will never know what would have happened if Moore had gotten hat shot off at the end of regulation. The fact a foul wasn’t called there, but was called any time there was a loose ball is ridiculous. That final play of regulation took me back to my days as a grade-schooler in Basil Mawbey’s summer basketball camp. They always taught us that if you’re going to know the ball away, go from under the ball because if you go over the top they will almost always call a foul. The Oklahoma player went over the top and got it away cleanly. With the way Moore was shooting who didn’t think his shot there would go down?

3-point shooting – This is what kept us in the game. Oklahoma was fighting with paper cuts getting a point at a time from the line while we were going nuclear with the threes. Before missing our final five attempts we were actually shooting 50% from long range at one point in the second half.

Lewis Jackson – One of his few mistakes was the biggest one of the game when he simply threw the ball away at the end of overtime. It tarnished a big game where he had 10 points, six dimes, and two absolutely huge 3-pointers.

Defense on Blake Griffin – I could read the frustration on his face in the second half. He got his numbers on the glass, but he only had 18 points and was held to almost half of his season average in shooting from the field. You could tell he didn't quite know how to handle what we were throwing at him. The fact that he still got his numbers shows just how good he is. We made sure that he was not going to beat us single-handedly, but he got some big help from his brother and from Willie Warren.

Officiating – I do not normally complain about officials, but something needs to be said here. There is no way that two evenly matched teams like this should have a 41 attempt difference in the free throw department. It was especially bad late, when somehow an inadvertent whistle and timeout was awarded on a lose ball. These guys didn’t understand that when the ball is loose there is sometimes some contact. It’s okay not to call a foul then. I felt good when we grabbed a four point lead early in the OT, but all we did was foul the rest of the way.

Dumb mistakes – This was the real story of the loss. We had a lot of just plain stupid turnovers and rushed shots. If we cut out half of those, which is what we normally do, we win by 10 points despite the free throw difference. Once we started hitting threes I think everyone felt like they needed to shoot them. That led to some very ill-advised attempts in the final minutes. I feel like Oklahoma outplayed us in the first five minutes and last five minutes, but that was enough even though we outplayed them the rest of the time. Those losses are the most frustrating kind.

JaJuan Johnson – He took a bit of a step back tonight. He was saddled with foul trouble and never really got into the offense. To be fair, we kept fumbling away the perfect entry pass to him in the first half.

In my opinion, the Duke game is now a must win game. We’re not going to get any national respect unless we take it and the Davidson game. If we lose both, we’re going to go into the conference season with just three losses, but they were in the three biggest games. We need to beat Duke to have a great win on our resume for tournament seeding.

I am not going to place this loss totally on the officials like everyone on the GBI board is. We played our own large role with the turnovers and rushed shot. Oklahoma is a good enough team that this loss will not reflect poorly on us in anyway. Where it hurts is the fact that we let a chance at a quality win slip away. Everything that went wrong is correctable. We’re also not going to have this big of a difference in fouls again.

Tuesday night the fans need to do their part. If you plan on sitting, stay home. Give your ticket to someone else. I will be there, and I want 14,122 other screaming fools who won’t sit down or shut up until the game is over. If there is a student that can smuggle my wife and I into the Paint Crew I promise you we will be as loud and crazy as you want us to be. Just contact me ahead of time and we will be there. I want everyone on their feet for 40 minutes to let the Dukies know that the Mackey maniacs are better than the Cameron Crazies by sheer strength of numbers.

Who is with me?