The final week of Big Ten play has almost turned into a youth soccer league. I say that because it seems like everybody gets a trophy, including the winner of 3-8 Purdue vs. 3-8 Indiana. For the first time in a couple of years, there is no rivalry trophy at stake in the Michigan-Ohio State game as the Big Ten title is not at stake there (unless Michigan State beats Penn State). That Penn State-Michigan State contest offers the rare double trophy game, as they play for the Land Grant trophy. I know that trophy was created mostly to get Penn State involved in a rivalry once they joined the Big Ten, but it is still trophy.

The Big Ten gets center stage this week on all the networks since we are the only conference that will be finished after Saturday. That will end next season, as the Big Ten will finally be allowed to play after Thanksgiving. I don’t know how much this will help in the bowls by shortening the layoff, but I am not looking forward to freezing in the snow of an early December Bucket game somewhere down the line. 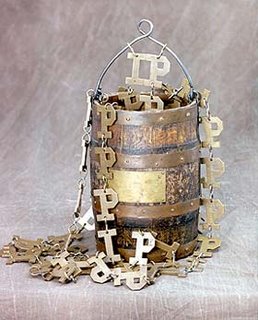 The numbers in this rivalry are reflected In the way it changes hands. In 1997 and 2002, the most recent time Purdue has won the Bucket back, the Boilers have patiently waited at midfield for an IU manager to deliver the Bucket before the seniors take it out and celebrate with the fans. In 2001 and 2007 Indiana raced across the field and seized it from the Purdue bench. Each time we get the Bucket we know we’re going to have it for awhile, so we’re patient and savor it. Indiana has to practically steal it from us because they know they won’t have it long.

Around 3:30 Saturday afternoon I expect another solemn ceremony where the Bucket changes hands. As much as I want the seniors to lead this respectful transition, I hope that Joe Tiller gets his hands on the Bucket first. In the nine previous times he has won the Bucket I don’t think I have ever seen him parade it around the field. This season has been rough on all of us. It’s not what we have expected, but there can be at least a small bright spot if Joe hoists the Bucket Saturday afternoon. Of the soon to be 55 P links on that chain he will have been responsible for 10 of them. Only three of the links (two P’s and one I) have a Rose Bowl mention on them, and he is responsible for one of those as well. No coach in the series except for maybe Jack Mollenkopf has left such a mark on this series. Joe Tiller will end this dismal season on a positive note. Thank you, Joe, for everything you have done. You will be missed. Please enjoy Wyoming, as I can’t blame you for wanting to enjoy such gorgeous country. Purdue 31, Indiana 17

Can we please remove the ridiculous free pass Rich Rodriguez has? Why is it suddenly acceptable for him to have the worst season in Michigan’s long history? This is Michigan. They are the winningest program in college football. They can recruit 4 and 5 star talent without even trying. A trained farm animal should be able to coach them to a 6-6 record and bowl appearance. Rodriguez comes in with great fanfare and he immediate has the worst season in school history. Now players like Sam McGuffie are leaving the program. Michigan fans are even talking themselves into accepting another rebuilding year next year in the hopes of a big 2010. Are you serious? THIS IS MICHIGAN!!!! I have seen this before. It was called Nebraska at the end of Tom Osbourne’s tenure. They went from the top to the middle in a hurry and are just now one of college football’s creamy middle teams.

Ohio State will likely be the latest team to tee off on the Wolverines this year. Only Wisconsin and Minnesota whiffed in their chances. The Buckeyes need a win then will wait to see if the Rose Bowl will come calling. Michigan State fans must bite the bullet and hope for a Wolverine upset if they want to go Pasadena. At least Michigan can cost the Buckeyes about $14 million with a win, because Ohio State is probably going somewhere in the BCS regardless. Personally, I like the possibility of a Miami-Ohio State Orange Bowl. Mrs. T-Mill would probably try an invoke some kind of voodoo curse with penalty flags if that was the case. Unfortunately, that possibility took a major hit last night. Ohio State 38, Michigan 10

I’m not saying we have another Appy State on our hands, but Cal Poly is one of the better 1-AA teams in the land. They have a punchers chance of beating a disappointing Wisconsin team that has little to play for. If Illinois beats Northwestern and the Big Ten doesn’t get a second team into the BCS The Motor City Bowl will have a choice to make. Should Wisconsin finish the season by losing at home to a 1-AA team they may find themselves joining Michigan, Purdue, and Indiana at home for the holidays in that situation. I don’t think it will happen, but Wisconsin had better win just to be safe. Wisconsin 31, Cal Poly 21 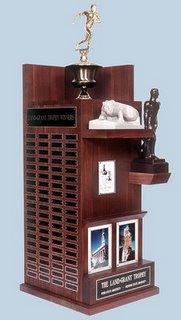 By kickoff Michigan state will know if they are playing for Roses or not. Should they beat the Nittany Lions they will have at least an outside chance at going to a BCS bowl anyway. A number college football sites have pointed out that while an unwanted Ohio state-USC Rose Bowl rematch is in play, another ugly rematch is more likely. A Penn State win sends them to Pasadena unless all hell breaks lose in front of them. Their opponent could be Oregon State (again) if the Beavers win their final two games. That would also likely hurt Ohio State because USC will go somewhere in the BCS as an at large selection. The Big 12 and SEC will each be getting two bids, leaving one left. That is likely going to Utah, Boise State, or Ball State if one finishes unbeaten.

The real question to ask is can Michigan State get an at large BCS bid with a win? They would be 10-2 with a loss to the Big Ten BCS representative and a good Pac-10 team on the road. An Oregon State loss along the way would certainly help by taking USC out of the at large pool. Unfortunately, I think Penn State is too good and has too much to play for. Their defense is more than good enough to contain Ringer, and I don’t think Hoyer can beat them with his arm. He struggled too much against Purdue to give me confidence in his ability to pull an upset on the road. Penn State 24, Michigan State 17

Of the teams that have much to gain on Saturday in their rivalry contest Northwestern may have the most on the line. If the conference can get a second team in the BCS, the Wildcats can do the most damage as a result. They can knock their in-state rival out of a bowl game and position themselves for a New Year’s Day date in Tampa if things fall right. Michigan State, Penn State, and Ohio State will clearly go ahead of them, but if two of them go to the big money games the third will go to the Capitol One Bowl in Orlando. That would leave the Outback to choose between Northwestern, Iowa, and Minnesota. A 9-3 Northwestern team with wins over both would be an attractive option even though they have an ugly loss to Indiana.

Illinois is another team that needs its free pass revoked. The Illini are loaded with talent. There is no reason they should be 5-6 and needing a win over a good rival to get to the Motor City Bowl in Detroit. I won’t buy the tough schedule argument either. Good teams beat other good teams. See Purdue football 2004-present for an example of that. This series has come a long way from two years ago when it was the battle for last place. That battle has moved down I-65 to West Lafayette. Northwestern doesn’t have a real home field advantage, but it does have the better coached team. According to ESPN, this will be the final time that the teams will play for the Sweet Sioux. Northwestern 23, Illinois 20 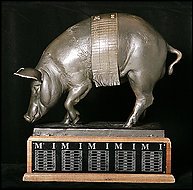 Of all the things to play for, a giant bronze pig is right at the top of the list. It has a most interesting backstory though. Apparently the Floyd of Rosedale averted an inter-state war not seen since the Civil War in 1861. Minnesota has had a rough go of it lately, losing consecutive trophy games. They will try to use a surely emotional Metrodome finale in order to get at least one of them back. A few weeks ago the Gophers looks like they were going to possibly take all three trophies to Pasadena. A fourth straight loss may send them empty handed to the worst bowl destination of all: Detroit. At least they are going somewhere.

The running joke about Iowa in the bowl season is that they travel well, so they should be chosen ahead of teams. You had better believe that is what Northwestern is thinking. The Wildcats can finish a full game ahead of them in the standing and have a head to head win over them on Iowa’s home field. Still, it wouldn’t surprise me to see the Hawkeyes taken ahead of the Wildcats based on the travel factor. The Floyd game boils down to the fact that Iowa is playing well and Shonn Greene is the real deal. Minnesota has hit a wall, and may still yet be a year way. Iowa 21, Minnesota 20