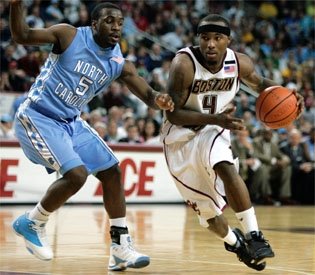 Purdue’s real basketball begins Wednesday night when the Boilers face Boston College in the semifinals of the preseason NIT. The Eagles are our first major conference opponent. To this point Purdue, has played four mid to low majors and has won each game by 20 points. Each game was a business-like "nothing to see here" performance that went exactly as expected. Top 10 teams shouldn’t be challenged in four games at home like we have played, and we haven’t been. There have been a couple of issues such as rebounding and spells of cold shooting, but those are not major surprises. The key strength of this team, versatility, has shined in four blowouts.

We have the Eagles to thank for one of the few bright spots of the end of the Gene Keady era. Many Boiler fans will remember Willie Deane’s slashing style from earlier this decade. Deane led us to the final NCAA appearance of Keady’s tenure, and I remember him as one of the bright spots of the 2001-02 season when I was a senior and the Gene Pool had five people in it. We also got Gordon Watt from them after a year, but he then transferred to Houston Baptist.

Friday night faces an even more interesting test. We will either see one of the nation’s best players in Oklahoma’s Blake Griffin or a couple of familiar faces in Mike Davis and Robert Vaden of UAB. Yes, Vaden is still playing college basketball nearly a decade after he announced as an eighth grader he would be attending Purdue. We’ll be playing one or the other in the championship or third place game, but first up is Boston College.

Boston College Eagles (3-1) 2008 record and Postseason: 14-17 (10-2 start) finish, loss in second round of ACC Tournament
Blog information: Eagle in Atlanta is the best I have found

Boston College found its way to New York with a couple of easy home games, but stumbled in an odd road test this weekend. The Eagles opened the season with an 80-65 win over Central Connecticut, then won both games over Loyola-Maryland (90-57) and St. John’s (82-70) in the first and second rounds here in the NIT to advance to New York. St. Louis proved to be a trap game on the road this past weekend. The Billikens surprised Boston College 53-50 in St. Louis as the Eagles shot a pitiful 33% from the field and 58% from the line.

They like to shoot the 3-pointer, putting it up more than 16 times per game from beyond the arc. Joe Trapani and Tyrese Rice are the two most dangerous threats from long range. Consequently, they are also the two leading scorers. Rice missed the season opener against Central Connecticut, but he is averaging 16.7 ppg. He dropped 28 points on St. John’s, but like the rest of the team he struggled against St. Louis. Rice does a little bit of everything. He can distribute the ball (6 assists per game), shoot the three (37.5% from long range) and can get to the basket. He’s not afraid to draw contact, having made 84% (16 of 19) free throws. If he is on his game Boston College can be a very difficult team to beat.

Trapani is averaging 14.5 points per game with a high of 20 against Loyola. On the year he is hitting almost 43% of his 3-pointers. That is good for second on the team behind Biko Paris (4 for 9). Rice, Trapani, and Paris will have to be guarded closely on the perimeter. They are by far the biggest 3-point shooting threats. Fortunately, we have a habit of harassing teams into bad shots. Paris’ best game came in the opener when he started in place of Rice. Since then he has just nine points. Trapani is also another guy we cannot put on the free throw line. He hits nearly 86% of his shots from the charity stripe.

In the paint we will have to deal with Corey Raji and Rakim Sanders. Both have started all four games and are dangerous rebounders. Raji is especially good on the offensive glass, generating second chance points with 16 offensive rebounds so far. Raji is the team’s leading rebounder overall with 6.8 per game in addition to 13.3 points per game. He’s the team’s best shooter from the field at 56%, but most of his work is exclusively in the paint. Sanders averages 11 points per game and 6.5 rebounds. It will be critical to crash the glass and prevent any second chance points from these two.

Fortunately, there isn't an overwhelming amount of size to deal with here. Trapani is 6'8" and plays more like Robbie Hummell as an inside-outside player. Josh Southern is the tallest at 6'10" and is the ffifth starter, but his numbers are not as good as Raji, Trapani, Sanders, and Rice. He had a 12 point, 9 rebound game against Loyola but has done little else. He is putting up four points per game in just 14.5 minutes per night. Paris, Reggie Jackson, and Evan Ravenel have played more off of the bench. Jackson leads that group with almost 6 points per game.

This is also a very young team. Rice is the lone senior, and the little used Tyler Roche is the lone junior the rest of this team is made up of sophomores and freshmen. I would say this means the Eagles are about a year away, but we all know what our freshmen and sophomores did last year. This makes Rice the unquestioned senior statesman of this team. He has NCAA tournament experience from BC last appearance in 2007.

Boston College has enough depth to match our own, and anyone can be the scorer on any given night. All five starters have been in double figures once. Jackson had a 10 point game against St. Louis when Trapani and Rice struggled. Ravenel gives some pretty consistent minutes in terms of points and rebounds as well. They have shown a tendency to pick up the slack in other places. Though St. Louis was a loss, Rice and Trapani combined for just 12 points while Raji had a season high of 22.

This will be a very good test because we’ll be playing a potential NCAA team from a good league on a neutral floor. New York will give us a pair of chances in that regard, as will the game against Davidson at Conseco. If we’re going to make a deep tournament run we have to win these types of games. Barring an absolute disaster we’re going back to the NCAA’s. It is games like this that allow us to get a higher seed and hang around a little longer than the first weekend. I am concerned about their rebounding ability. In the three victories they have dominated the glass, but St. Louis out-rebounded them by 11. They have comparable size to us though. That means it comes down to effort and positioning on the glass. They aren’t a great free throw shooting team either at 67%.

To win we have to keep them off the offensive glass. Boston College is averaging more than 16 offensive rebounds per game. They also share the ball well with 14 assists per game. If our defense can take away these two areas we will be playing in the championship Friday night. A defensive slugfest likely favors us. Purdue 65, Boston College 60