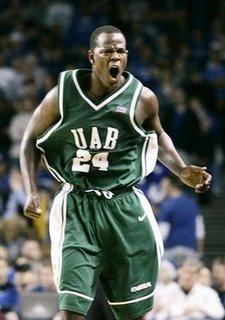 File this one under putting the cart before the horse. Regardless of tonight's outcome against Boston College, we will be playing one of these teams Friday night. Both present unique challenges. UAB is a team loaded with speed and shooting. Oklahoma is a grind-it-out type of team that will try to pound us into submission inside. This is a great test for the NCAA Tournament. In both cases we will have just 48 hours to prepare for a team. Here is a quick look at each opponent.

The Blazers had a good year in a weak conference last season. They were 12-4 in conference USA, but two of losses came in games that could have made a difference between an NCAA and NIT berth. Their game-winning shot against Memphis at home was just barely past the final buzzer in a 79-78 loss. That one win could have put the Blazers into the NCAA as an at large team. A loss to Tulsa in the first round of the Conference USA tournament sealed their fate.

UAB is the surprise team in New York. They were the only team here that didn’t get to play the opening rounds on its home floor. The Blazers traveled out to Tucson and squeezed out a pair of close wins over Santa Clara (64-61) and host Arizona (72-71). The Arizona game was decided by an absolutely stupid foul committed by the Wildcats that allowed a couple of free throw attempts with less than a second to go. Those wins were the meat in a sandwich of success that featured n 87-66 win at Troy and a 77-62 win at Old Dominion as the bread. Unlike the other three teams in the field, UAB has yet to play a game at home.

The Blazers are a dangerous team. They play in a conference dominated by Memphis and full of mediocre teams. They are searching for wins that will improve their postseason profile, and beating Oklahoma then the Purdue-Boston College winner would suit them quite nicely. They lacked such a win last year and it landed them in the NIT. UAB has already proven they can win on the road too. They have nothing to lose and everything to gain by getting a pair of games against a couple of the nation’s best teams. They also know how to win close ballgames as shown in Tucson.

They are led by the aforementioned Robert Vaden, who followed Mike Davis from IU down to UAB and has made a nice name for himself there. While I am hurt by the way he spurned us years ago, I wouldn’t go as far as to echo the sentiments of a fellow writer. This fellow Purdue alum, after Vaden switched his commitment, stated jokingly, "He’s dead to me, and I am not voting for him for Mr. Basketball." Vaden is a very dangerous scorer. He’s averaging almost 19 points per game, he shoots 89% from the free throw line, and he hits almost 45% of his 3-pointers. The scoring battle between him and Blake Griffin should be fun to watch.

Vaden is far from the only scorer UAB has. Paul Delaney III is averaging 17.3 per game while Lawrence Kinnard is over 15 points per game too. Delaney had 10 points and hte game winning free throw against Arizona. Kinnard is an imposing presence in the paint as well with a team high 9.3 rebounds per game. The Blazers love the 3-pointer even more than Boston College. They throw it up from long range 18 times per game and 40% of those tries. Kinnard does not limit himself to the paint either. He is a versatile that can step out and hit the 3-pointer with 41% accuracy. Should we play the Blazers they will definitely test out perimeter defense.

UAB boasts an eight man rotation, but the scoring drops off significantly after the big three. Terrence Roderick is the first man off the bench with 8.3 points per game, but the remainder of the rotation averages five points or less. UAB is not a strong rebounding team, so in a potential matchup we may have a slight edge there. They are pulling down just 35.5 boards per game. They also share the ball well at 14 assists per game. Point guard Aaron Johnson leads this category with almost four dimes per contest.

Channing Toney is another player to watch out for. The 6'5" senior guard averaged more than 10 points a game last year, but has been realtively quite this season. He is another player htat is not afraid to shoot the 3-pointer, but his attempts are down this year.

Seeing Chris Kramer guard Robert Vaden would be a fascinating matchup. Kinnard and Delaney offer him more than enough help though. Beating UAB will not be as simple as shutting down a supreme talent in Vaden. The Blazers are a team full of good shooters. Delaney and Roderick hit better than 50% from the field, so forcing a poor percentage will paramount in any matchup. As always, we must rebound and defend the perimeter.

UAB is not blessed with much size. 6'10" Jeremy mayfield is by far the tallest player. The Balzers style of play is much more up-tempo to offset the lack of size in the paint. We should have a big advantage if we can make them play our halfcourt game and pound them with JaJuan inside. They are a wildcard of a team. If they are good enough to beat Oklahoma tonight htey are certainly good enough to beat us. Our trademark defense and size advantage down low should be the difference, but all bets are off is Vaden goes nuts. Purdue 70, UAB 62 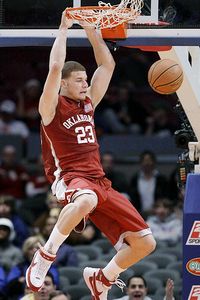 If we’re playing in this tournament in order to get a game that is like a Sweet 16 or Elite 8 game we want to play Oklahoma. As the #2 seed in the tournament, a Purdue-Oklahoma final is what the organizers wanted. We owe them too. Drew Lavender’s late layup started the downfall of the 2003-04 team. It was the first of many close losses that season. In the return trip the Sooners kicked us around Mackey Arena a year later. For good measure Lavender was still around to lead Xavier to our demise last year. A win would not just give us a quality non-conference win for later seeding purposes. It would also pay back a largely growing debt. And yes, I am aware we beat a #3 seeded Kelvin Sampson coached team in the 2000 NCAA’s

Oklahoma is 4-0 behind one of the best players in the nation in Blake Griffin. Griffin has been the leading scorer in all four games, topping 20 points each time. Oklahoma even had one of the more difficult paths to New York in this tournament. An 82-78 win over Davidson was mere survival, as the Sooners nearly blew a 21 point second half lead. Stephen Curry had a career high 44 points int hat game, but Griffin counters with a 25-21 night in points and rebounds. Oklahoma opened the season with wins over American (83-54) and Mississippi Valley State (94-53). Both were NCAA teams a year ago. Gardner-Webb put a scare into the Sooners this weekend before falling 80-76.

Griffin is a great talent to build around. So far he has punished smaller teams with his size. He has put up 26 points per game and has shot an astounding 74.5% from the field. I would say we need to keep him away from the basket, but he is also 2 for 2 from 3-point land to show some range. Just about the only weakness in his game is 56% free throw shooting. He is still getting to the line 11 times per game though, so if he goes there enough times yhe is going to hit something. Keeping him off the boards will be difficult as he is averaging almost 20 rebounds per game. Griffin will be a very formidable test for our interior players. If we want to be a Final Four worthy team though we have to learn how to contain dominant bigs like him.

The big man is helped in scoring by Willie Warren (15.3ppg) and Taylor Griffin (10.5). Taylor is actually the older brother of Blake Griffin and has been around long enough to be recruited by Kelvin Sampson at Oklahoma. Apparently we just can't get away from Sampson this week. In addition to expert-level cell phone use after being recruited by Sampson, Taylor Griffin is having his best season in Norman as a senior.

Austin Johnson makes things go from the point while Tony Crocker is a serviceable fifth starter. Cade Davis can provide some offense off the bench. He has played in just three games but is averaging almost 9 points per contest. As a team Oklahoma shoots almost 50%, and with big bodies like the Griffins they can get plenty of second chance points if we allow them to dominate the glass. This team reminds me a lot of Wisconsin last year with Blake Griffin in the role of Brian Butch.

Granted, some of these numbers may be inflated with a pair of blowouts in the first two games. If a team like Gardner-Webb can make Oklahoma sweat we should be able to really scare them. Blake Griffin needed 35-21 game to top the Bulldogs, but everyone could have been distracted Saturday afternoon because of the football game on campus that night. The Sooners must get past a feisty UAB before facing us anyway. The Blazers are more than capable of pulling the upset.

Should we get a game with the Sooners it is clear that we must make sure Blake Griffin doesn’t go absolutely nuts. We must keep the clamps on the other four guys on the floor. If we can contain those four and dare the big man to score 55 and beat us by himself we’ll be in a good position to win. Griffin is good enough that he might just do that though. Taylor Griffin is a capable shooter as well, hitting two thirds of his shots from the field. Oklahoma goes with a nine man rotation too, so wearing them down won’t be an easy task. Regardless, this will be a nice warm up for a huge game against Duke in about a week.

This will easily be our most difficult contest on the young season, but I am encouraged that teams like Gardner-Webb and Davidson challenged them. I don't think we'll need a 44 point sing-handed effort like Curry, but we can implement a game plan like Gardner-Webb to have a chance. The Bulldogs received balanced scoring from their five starters and held their own ont he glass. They also hit some key 3-pointers from Grayson Flittner to stay close.

Unfortunately, I feel like Blake Griffin is going to have a field day agaisnt us. We're going to have a hard time denying him the ball, and Oklahoma can probably out-physical us like Xavier last year. The bench doesn't do much scoring, so if we can get Blake Griffin in foul trouble it will help. Oklahoma relies on him quite a bit. If we somehow hold his numbers down we will win easliy. If not, we're in trouble. In end the end, I think he will perform well enough to be the difference. Oklahoma 58, Purdue 56