It's not a gay thing, it's a dominance thing

Share All sharing options for: It's not a gay thing, it's a dominance thing 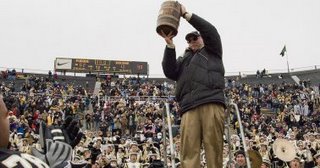 I had figured that Purdue would win today. With the emotion of coach Tiller’s final game and everything else I thought the Boilers would win, and win comfortably.

We took the bucket back by force. I thank my friend Greg (ironically, an IU grad) for the title of this entry. He came up with that phrase to put prison rape in a better light. Personally, I don't think there is a good light for prison rape. It is essentially what we did to the Indiana University football team today.

This was probably more dominating than the 63-24 effort four years ago that cost Gerry DiNardo his job. In that game we still had mistakes. We dropped at least two sure touchdowns and had a couple of turnovers, one a fumble returned for a score. DiNardo was fired after that game, mostly as a direct result of it. With that precedent set, Bill Lynch may want to polish his resume.

Today was essentially a perfect game. Only a big return that set up a field goal and a meaningless late touchdown was the second of two very slight blemishes. I am giving the offense an 11 for 11 for the day. The final drive of the game would have been a score if we were even interested in scoring.

The Hoosier Report wasted no time today in calling this the worst loss in the history of Indiana football. That is saying something. As you see in John’s entry, the Hoosiers have a number of losses by 50 or more, but today was the only time one has come to a team that finished with a losing record. While I do think we ran the score up a bit (we had no business throwing even once in the fourth quarter), Indiana fans should be embarrassed by the effort the Hoosiers put forth. They simply rolled over and died. They never even showed interest in stopping our offense, and their offensive game plan seemed to consist of letting Kellen Lewis run for his life and hope someone got open to throw to. They were awful even by Indiana’s standards.

There is no need to even break this game down into positives and negatives. Everything was a positive. The only slight negative was the kick coverage on the big return by Thigpen. Even then, the defense quashed the small ray of hope it set up and surrendered just a field goal. Everyone played well, but here are the standouts:

Curtis Painter – Allow me to say this: WHERE IN THE HELL WAS THAT ALL YEAR! This is the Curtis Painter that everyone expected. If this is the Curtis Painter we could have gotten all year we’d probably be sitting at 8-4 tight now instead of the opposite. It was refreshing to see Curtis end his career on a very positive note. Injuries obviously hampered him, but most of the year he simply didn't perform. Without injury, I think we beat Minnesota (who has showed no interest in playing the second half of the year) and a completely healthy Painter might give us a chance at Michigan State. I hope he can shake this year off and have a successful pro career now if given the chance. He even threw the deep ball very well.

Keith Smith – Is anyone else excited about getting this guy back for two more years? He has found a home in the slot. He is strong too, and gives us a Dustin Keller-like presence at the slot receiver position. He’s only going to get better too. I wasn’t so much impressed by his catches today, but by the number of yards he gained after the catch and after contact. When he was tackled, he was moving the pyle forward. That’s the sign of a physical receiver.

Desmond Tardy – Dez was just one of many seniors that shined today. He even did a great job on the throw back to Painter. I love how everyone saw that pay developing when Dierking went in motion except for the Indiana defense. It was our predictable offense, but IU's putrid defense still fell for it.

Aaron Valentin – Like Smith, I am glad that Valentin is coming back next year. He gave us a big play threat today, and nearly broke Indiana’s spirit with a kickoff return for a score. He ended up finishing just a yard short of being our third receiver with 100 yards today, joining Smith and Tardy.

Kory Sheets – I think I will miss this guy the most of all. He has been a pleasure to watch for four years. Some questioned whether he could handle being the sole featured back this year with his fumbling problems. He responded by having just one fumble all year. That’s amazing. He leaves Purdue with 54 career touchdowns. That leaves him second on the all-time scoring least behind Travis Dorsch. He easily owns the career touchdowns mark, which will probably stay there for awhile. For good measure, he broke the single season rushing touchdown mark today too with 16. For some more numbers, Kory passed Otis Armstrong for the second most rushing yards in school history. This season was also the fourth best season yardage-wise by a Purdue back ever. As a result, I may be forced to retire my well-loved #24 jersey from the rotation. Let the debate officially begin between him and Mike Alstott

For the record, I give Alstott a slight edge. He was handicapped by having Jim Colletto as a coach, 11 game seasons, no bowls, and he only played extensively for three years.

Torri Williams – I heard chants of, "One more year" for Torri in the stands today. If this was his last game, I am glad it was a good one. First off, he completed a season without missing any time due to injury. Second, he had a pick and topped us with seven tackles. He damn near recovered a fumble too.

Ryan Baker – I have to mention Baker for coming into the stands not on the student side, but on the west side and shouting thank you to all in attendance. Mr. Baker, thank you for wearing black and gold. Thank you for your dedication and determination in defining the spirit of the Boilermakers. He was an appropriate voice for the players today in saying goodbye.

Brandon Whittington – I wanted to single out Brandon because it was nice to see him finally catch a touchdown pass. He did a great job of getting the foot down on a difficult catch too.

The Fans – Much was made about the team not quitting late in the season, but the crowd was into it today despite two 3-8 teams playing. We saw three "inflatable" sightings and with the offense rolling the fans hid their discontent well. There was no booing of Tiller or the players. Many fans also stayed around for the ceremony on the field honoring coach Tiller. Hopefully their patience will be rewarded next season. We avoided acting like classy Notre Dame fans too. It seems like the program that has "the richest tradition in college football" could learn from an inferior 4-8 team about how to handle a loss.

Coach Tiller – I thanked coach Tiller earlier this week, but it seemed like he really had some fun today. He tried some new things and went out guns blazing like the Cowboy Joe of old. I think if I ever am in Buffalo, Wyoming I may just look him up in the phone book and stop by for some coffee.

Where do we go from here:

Regardless of how the rest of the season turned out, this was the perfect ending. Joe got a final win at Ross-Ade in convincing fashion. The seniors got the Bucket back and all performed well in a woodshed beating of a rival. Notre Dame also suffered an embarassing loss, though it makes me even more ashamed we lost to that team.

I can’t help but ask where this was all year. Is Indiana really that bad that our worst team in years is 52 points better than them? I know the Hoosiers were awful today, but can they be so awful as to make us look that good? I think it was a little of both. We were a better team than we showed most of the year, and that manifested itself today. I think injuries were the biggest factor. Our front line guys were plenty good, but we simply didn't have the developed depth to recover against a tough schedule. As a result, things really could have been better this season if today’s team had showed up at other times.

If today’s team shows up I think Oregon, Iowa, Michigan State and Minnesota become wins. If the offense specifically shows up, Penn State and Ohio State can become wins too. Notre Dame and Northwestern were also two of our worst efforts, so those could have changed as well. Right now I am embarrassed that we lost in South Bend after a godawful Syracuse team waltzed in there today and won. It’s nice to see Notre Dame has turned a corner and run right into a wall.

There is also plenty to build on next year. Justin Siller will get better if he wants to put the work in during this offseason. The defense actually played quite well for most of the season and only some particularly ugly efforts in games like Notre Dame and Iowa offset the stats. Most of those starters come back and should get better. There are some offensive playmakers to build around in Jaycen Taylor, Keith Smith, and Aaron Valentin.

The biggest key will be avoiding injuries. Since most of the offensive line was hurt from spring practice on we never had a chance to build anything there. If the line struggles, the team will struggle. Our new head coach specializes in building offensive lines though. A quick turnaround and return to a bowl game can happen if that offensive line can come together.

A quick look at the schedule shows the potential for six wins. Toledo, Northern Illinois and Indiana have to be three of them. At least a split between Oregon and Notre Dame is a reasonable goal, and that would give us four. Northwestern might take a step back, and both Illinois and Michigan State haven’t convinced me they will be world beaters despite having good recruiting classes. Wisconsin is an enigma coming off a season in which they were lucky to get seven wins. Michigan needs drastic improvement too. I think it will be a season much like this one (at least when we saw it in the future) in that we won’t be totally out of a lot of games, but there aren’t many guaranteed wins. 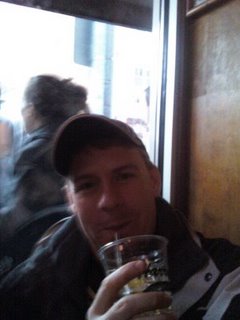 In the mean time though, I am glad we have a positive note after such a bad year. The Bucket is back where it belongs, and I was back where I belong after the game as shown. At Harry's I toasted a Long Island to getting the Bucket back, to Joe Tiller's career, and to the fact it is absolutely impossible not to smile in Harry's.