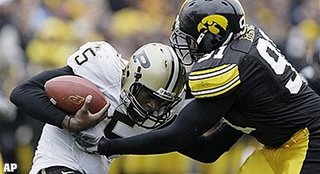 Today’s weather in Iowa City, according to my phone game tracker, was 37 degrees with a stiff wind and snow flurries. I saw this as I was sitting in brilliant sunshine and 85 degree weather on Miami Beach. In the end I didn’t have the heart to find a place to watch it. I settled for watching the gametracker on the phone and checking out the highlights later online.

It was a much better use of my time.

This loss was like much of our season. We did a few things well, but one major thing led to our defeat. Today we saw glimpses of the Curtis Painter we have needed all along, but the run defense was finally gashed by one of the good backs it faced. A pair of touchdowns were called back due to mental mistakes, and those four points lost on that drive would have been huge in the end if you add a two point conversion. Iowa made some mistakes, but we made bigger ones.
Now the ignominious Bucket game is here. The loser will finish all alone in the basement of the Big Ten. We have to win in order to avoid this fate, but honestly a loss wouldn’t surprise me at this point. It would be the final insult in what has been a dismal season.

Positives from the Iowa game:

Curtis Painter – For what it’s worth at this point, Painter may have won the starting job back if he’s healthy. Siller is obviously the future. It is sad that his numbers were still not that great and he overthrew the end zone on the final play, but we have to think it was one of his better efforts on the season. The present isn’t very bright, but I really hope Painter can have a solid game against the Hoosiers next week. He’s taken a lot of flack this year. Much of it was deserved, but he was still hurt for a good portion of the year too. I’m sure he is as disappointed as anyone. I want him to have a solid final game just so he can end his career on a somewhat positive note. He found the end zone a couple of times with a pair of seniors that also had much-needed good games. He ran the two minute offense well and earned himself more PT in the second half.

Let’s face it, there isn’t a whole lot else to play for this year. If Curtis Painter can give us the best shot against the Hoosiers he should play. If Justin Siller is that player, he should play. We’ll probably see both at least a little, but since we have only one game to play for now I would go with Painter. He deserves a shot at some minor redemption and I think he will get it. The interception as bad at a bad time again, but we’re used to that. Painter moved the offense and produced points for the first time in months. He was far from the reason we lost.

Joe Tiller – Joe sure played like he wanted to win. He channeled his inner Charlie Weis and went for it on fourth down four times, getting all four. I was shocked to see him go for it on 4th and 3 from the eight early on. Even though that was the drive that had a pair of scores called back it was still gutsy. Watching the gametracker allowed little chance to know situations, so I initially thought he was going for it there because of the assumed swirling winds. At least he played for the win. You get the sense that next week will be a kitchen sink game. We have nothing to lose, so throw everything into making it a big party of a win.

Desmond Tardy – It’s another solid day for a guy that some say should have been playing more all along. Desmond Tardy will be missed. He has shown this year that he can be a special player when we get the ball in his hands. Unfortunately, we haven’t done it enough. I will go on record as saying that Desmond will be missed sorely next season. We have some solid guys in Smith and Valentin that look to be the leading receivers for next season, but neither one of them has shown the ability to separate from defenders after the catch like Dez has.

Anthony Heygood – This is another guy that is having a solid year and has a good chance to be our highest drafted player in April. Hey good always seems to be where the ball is and is there for the tackle. The defense got absolutely gashed on the ground today, but Heygood was still good. It is my hope that he is teaching the younger guys how to play by example because we need linebackers desperately next season. That’s even more true since Jason Werner has "A couple of weeks"-ed his way into not playing at all this year.

Negatives from the Iowa game:

Run defense – This is the first time this year we have made a great running back look even better. Last week’s numbers against Ringer were skewed a bit because we generally did a good job of containing him until he broke a big run late. Greene had no such containment. He ran early, ran often, and could have run for more if we had threatened to score more points. I think Frank Duong is still wondering what hit him.

Another clutch Painter interception – As mentioned, it is sad that this was one of Curtis’ better games. The interception came when my phone gametracker decided to stop working. I didn’t see it until the highlights online, but the throw was just retarded. It cost us a chance at three points there, and three there would have meant at least a field goal attempt for the win. I’ve never even played quarterback and I know not to throw into a crowd of people to a not open running back. At least we only have another week of this.

Dumb penalties – They cost us a touchdown twice. Enough said.

I didn’t want to say too much because I honestly didn’t watch the game. I have only stats, a two minute highlight package, and the gamtracker to go on. It sounds like this was yet another game we could have won, but we ended up shooting ourselves in the foot again. It is the story of the season and there is no sense in rehashing it. I had a "meh" attitude about this game, and that’s exactly the way it turned out.

We now have to win the Bucket. This season has been awful, but if we lose to an Indiana team that is lucky to have three wins against a crap schedule it will be a stinging insult. We’ve at least been close in a couple of games. The offense has let us down but for the most part the defense has been solid. Indiana has looked awful on both sides of the ball against nearly everyone from Ball State to Minnesota. They can’t run the ball, they can stop the run or the pass, and the passing game has been touch and go. If we cannot beat them in Tiller’s final game (and the final game for one of our best running backs ever) Tiller’s entire legacy will be tarnished.

Some would say it has already been wrecked beyond repair. I say it can be salvaged, but only a little. A lot of what has happened this year has not been totally his fault. He hasn’t forgotten to read other receivers. He hasn’t gotten hurt. He hasn’t quit in the second half of the Notre Dame game. He is not making dumb mistakes that cost us touchdowns like today. It was a perfect storm of suck this year, though ironically we could be a week away from saying we at least beat a ranked team. Should Central Michigan upset Ball State this week they might crack the top 25, making it our best win in four years.

It is terribly sad it has come to that and beating IU for the Bucket for benchmarks in a season. Danny Hope will have to rebuild just as much as Tiller did his first season.