Share All sharing options for: Hey you, GO VOTE!!!! 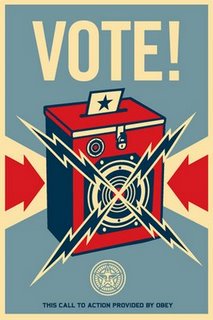 Enclosed is my final blogpoll ballot for the week, reflecting the changes pointed out by astute readers Sunday night. It is a small measure of democracy in the world of college football, even if Purdue probably would not make the poll if you expanded it to the top 70 or so.

When it comes to democracy though, tomorrow is a much more important day. The message of this short is simply to go and vote tomorrow. Personally, the closest I can come to an official Off the Tracks endorsement is Democrat Barack Obama for President and Republican Mitch Daniels for Governor of Indiana. It doesn;t matter who you vote for though, the important thing is that you do go and vote. If you don't vote you forfeit your right to bitch in my personal view.

This is far from a cry to go for Barack or to condemn McCain. It is more of a chance to speak out and say that I am exercising my right to do something that not everyone on this earth can do. As citizens, it is our right to vote for the candidate of our choosing for any reason. This reason can be supporting Obama's plan for education, or simply because I couldn't turn down voting for a guy in the primary that had the guts to go on the ballot with the name of "Hippie Joe" (and yes, he was running for Congress). It doesn't take the four I got on the AP U.S. Government test back in high school to figure this out.

So go vote! Vote Democrat! Vote Republican! Vote Libertarian! Vote Communist! Shoot, Vote Fascist Anarchist, I don't care! Just go and vote tomorrow. Then crack open a cold one and watch the talking heads all night long analyze the latest trends in how lesbian midget dairy owners with less than three children of different races voted in this election vs. the Tilden-Hayes election of 1876.