Bring on the Sooners!

Share All sharing options for: Bring on the Sooners! 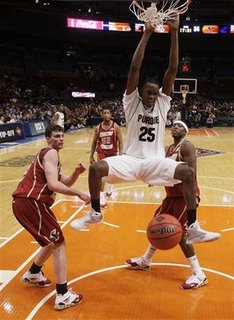 I was covering a high school game here in Indy last night, but I was able to avoid a score and watch the tape once I got home. The Boilers did well in their first serious test of the season. As always, there are positives and negatives, but we looked every bit like a ranked team in this contest. Sure we essentially bled the clock dry with a big lead in the final seven minutes, but it lead to a win. At some points it looked like we were a football team taking a knee every down to keep the clock running. Boston College helped us by having a pair of critical turnovers once the lead got down to six.

It was also the first true test of the solid 8 man rotation. Ryne Smith didn't find his way off the bench, nor did anyone else. It looks like it is going to be a sound strategy. Smith and Riddell can be emergency shooters off the bench in time of need. Both should get some PT in other upcoming games anyway.

E'Twaun Moore - The commentators were raving about E'Twaun's game last night with good reason. He set the tone with 11 quick points and shined on one of the biggest stages you can shine on in basketball: Madison Square Garden. I like the 19 points almost as much as I like the six assists.

Chris Kramer - He did what captains do by icing the game in the final minute with some big free throws. He was the only starter not in double figures, but he missed it by just a point. The breakaway dunk came at a big moment too as we were building the lead. I hear he can play a little defense as well.

Nemanja Calsan - Larry Clisby has taken to calling him Chally on the radio broadcasts, and I kind of like it. What do you readers think? It doesn't have the cachet of Ostrich, Smooge, and the Secretary of Defense, but it is still good. Chally weas a fighter on the offensive glass. He only grabbed two, but he was more of a force inside than in the past. We will definitely need that tomorrow night.

Dime droppin' - We had more dimes than Jay and Silent Bob last night. 16 assists on 24 made field goals is a very good ratio. We must continue to share the ball this way.

Rebounding - We still got out rebounded, but there was more effort there. I think the biggest thing right now is finishing rebounds. We're getting to the ball, but we're just not securing it. I counted at least five times where we should have had it easily, but it caromed away off of hands to a BC player. There must be dramatic improvement here before we face the rebounding machine that is Blake Griffin.

Defense - 38% shooting from the field. 21% from 3-point land. 15 turnovers. These were well below BC's average for the year. You're going to win a lot of game when you make teams have these numbers.

JaJuan Johnson - He is getting better every game, but still showed some room for improvement. 12 points, 6 boards, and 3 blocks were his final line. It's obvious at this point that Chally is his only help in the paint. Reid is not going to be a factor except in blowouts. That is why JaJuan needs to continue showing improvement every night.

Complacency - I think we got a little too comfortable with a 17 point lead and under 7 minutes to go. We got one field goal in that time and would have been in trouble had we not bled the clock dry on every possession. Even then, we didn't get high percentage looks after draining the clock.

13 offensive rebounds given up - And this is not a great rebounding team. Again, we must learn to secure the ball once we get to it.

This was a great test to pass, but Oklahoma is even bigger. The next two games against Oklahoma and Duke will tell if we're a true Final Four contender this year. We can win both. If we do, watch out!

I also wanted to wish everyone a safe and happy Thanksgiving out there. I'll be headed home to Kokomo for the day, so everyone travel safe!