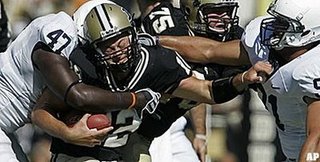 Since starting this blog just before the 2006 season it has primarily been a football blog. Even in the offseason I have primarily focused on the football team. Last year I made the move to year round coverage starting with the breakthrough season by the basketball team. Despite the fact that the football team is in a nosedive it cannot seem to pull out of, I have stayed with them as the primary focus.

That will begin to shift this week as the basketball team tips off it exhibition season Friday night in Mackey Arena. I'll still do write ups on the final four games of the season, but since the Big Ten is already decided I'll probably step back from doing Big Ten football stuff as a whole and start doing some more basketball stuff. This starts tomorrow, as I will release the first of my two (maybe even three) part preview on the basketball team.

As mentioned, the Big Ten is all but decided now. There is little reason to go into much detail as Penn State has all but officially won the conference, the other bowl bids have been decided in terms of the teams that will go bowling, and the Boilers will be done in short order. Even if we beat Michigan at home this week we won't survive a two game road trip to Michigan State and Iowa. Therefore, as I rank the Big Ten this week, I will let the other bloggers in the Big Ten bloggers' network comment on this week's performances. I'll also post the likely bowl destination for each team.

The basketball rankings will bring about the return of funny comparisons, I assure you.

9. Northwestern (6-2, 2-2) Result: Indiana 21, Northwestern 19 - Motor City Bowl - Someone has to go, and Northwestern just stated their case for Detroit. I almost put htem in 11th so they would think about what htey did for a week, but after seeing Lake the Posts I am just not that cruel.

8. Indiana (3-5, 1-4) Result: Indiana 21, Northwestern 19 - no bowl - I still think that Indiana will probably lose its last four games, but at least they put up a fight against Northwestern. Will we against them?

7. Illinois (4-4, 2-3) Result: Wisconsin 27, Illinois 17 - Insight Bowl - I wouldn't be too hasty to put the Illini in a bowl yet. Iowa is playing well, they won't beat Ohio State, and Northwestern at home in the finale could be our ticket to the postseason if we pull off a four game miracle. Let's all calm down now about Ron Zook as a savior.

6. Wisconsin (4-4, 1-4) Result: Wisconsin 27, Illinois 17 - Champs Sports Bowl - Really, the Big Ten still isn't very good at this point. It was good to see Dustin Sherer, a kid I wrote about quite a bit in high school, play well.

5. Iowa (5-3, 2-2) Result: bye - Alamo Bowl - I officially apoligize for thinking Iowa would be where we are right now and vice versa. Black Heart Gold Pants seems to be much more realistic about Purdue at the moment than me.

4. Minnesota (7-1, 3-1) Result - Minnesota 17, Purdue 6 - Outback Bowl - I kind of feel bad for the Gophers. They won because we had no offense at all yesterday and they brok two big plays to set up touchdowns. other than that, we kind of outplayed them. They're going to dominate a weak schedule and probably get killed by someone like Florida or LSU on new Year's Day. I know it is sour grapes, but the prickish Gopher fan in front of me yesterday set me off.

3. Michigan State (7-2, 4-1) Result: Michigan State 35, Michigan 21 - Capitol One Bowl - Michgian State is probably going to finish 9-3 with their only losses to teams that will likely finish in the top 15. Not bad at all. I also predict they will end our bowl hopes after we beat Michigan. I hope I enjoy East Lansing.

2. Ohio State (7-2, 4-1) Result: Penn State 13, Ohio State 6 - Rose Bowl - Can I please have a 10-2 season that ends in the Rose Bowl be a disappointment? It is entirely possible both losses will come to the teams playing for the national championship. Since the Rose Bowl wants to keeps the Big Ten-Pac 10 matchup at all costs except the Buckeyes to be there if they win out and Penn State plays for the title.

1. Penn State (9-0, 5-0) Result: Penn State 13, Ohio State 6 - National Championship game - Iowa could be tricky this week, but Indiana and Michigan State will not touch the Lions in Happy Valley. Not with what's at stake. They must take care of business and simply wait for Texas or Alabama to lose. That will happen.

Once again, there wasn't much change at the top my rationale for the top four remains: no undefeated BCS conference team should be behind a 1-loss team. If the one loss team wants to complain they shouldn't have lost their game. As usual, there is chaos at the bottom with four teams dropping out. I have decided the #25 spot must be cursed.

What is interesting is how Boise State, Tulsa, Utah, and Ball State are climbing in both this poll and the BCS poll. If mass chaos erupts, Boise State is already high enough to sneak higher and higher until they get some moderate consideration for a titel shot themselves. Since I love chaos, I hope a Penn State-Boise State championship happens.

And yes, placing Miami at #25 is complete homerism. They've played well lately and are still alive in the ACC.