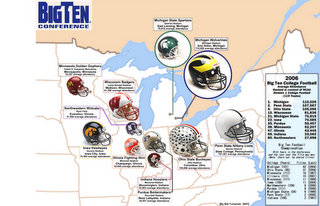 In response to my Ohio state preview yesterday several of our noted Oho State blogs have done previews of Saturday’s game. Here is the list of active previews if anyone is interested.

Eleven Warriors worked with my friends over at Boiled Sports on Purdue's keys to victory. His real preview, which is very good by the way, was posted this morning.

The Buckeye Blog is calling our game a practice game.

Our Honor Defend chooses to rub in Holy Buckeye one more time with a first person tale of what they were doing during the play.

As you can see, Buckeye fans aren't exactly quaking in fear at our arrival Saturday. Who can blame them. We're a 19 point underdog. We're not even confident in ourselves anymore.

This week as a whole is an important one in terms of the conference race. The winner between Northwestern and Michigan State can actually claim they have a shot at the title, especially since Northwestern does not play Penn State. Penn State’s own chances at the national title rest on a trip to Madison. Minnesota visits Illinois in an intriguing game, while one team’s bowl hopes will likely end when Iowa visits Indiana. Both teams have too many likely losses left to give the loser serious consideration for the postseason.

At least the last time we were on ABC we played Oregon tight in the latest of a series of gut-wrenching losses. We need that same team to show up in Columbus on Saturday with fewer mistakes. GBI has officially given up on the season by predicting a four touchdown loss. I am encouraged by the fact that Minnesota went into Columbus two weeks ago and played fairly well in a 34-21 loss. Ultimately this comes down to attitude. If this team goes in expecting to lose we might as well not even show up.

A win would be shocking. There is little doubt about that. Ohio State hasn’t been overly impressive so far, but it has gotten he job done except at USC. The defense doesn’t seem to be as stout as a year ago, but it is still very, very good. If we can keep the offense from rolling early like we did against Penn State a week ago we might have a chance. I know the real pivotal game is next week in Evanston. It’s a game we can get and probably have to get in order to play somewhere in December. This week we can win, but it will take an effort we haven’t seen yet. That means it is probably misguided optimism. Ohio State 24, Purdue 7

Michigan is officially on notice. Losing to App. State last year is one thing. The Mountaineers are actually a really good team. Losing to Toledo, who has already dropped a game to lowly Florida International (one of the worst teams in the country) would be worse. For one afternoon at least, Michigan gets a breather. Michigan 34, Toledo 6

The loser of this game has the dubious distinction of seeing a once promising season end up in the Big Ten’s basement at the halfway point. If Wisconsin gets off the mat and upsets Penn State the loser will be all alone down there, too. Neither team has beaten anyone yet, but at least Iowa has been close the last three weeks. The Hawkeyes actually aren’t that far from being 6-0 right now. Indiana can’t even come close to saying that. Both Michigan State and Ball State are very good teams, but the Hoosiers had to be thinking win in Minneapolis last week. Instead, they got very little all day against a defense that was awful a year ago.

Clearly, both teams need this game badly. The Hoosiers probably need it a little more because they cannot afford to drop a third straight home game in a schedule that was ready made for a bowl appearance. If they can’t win this one they may not win at home the rest of the way. Of course, they have owned Iowa the last two years. As a Purdue fan, I am counting on beating both and grabbing two wins somewhere else to try and salvage this season some. In that case, I think I might actually prefer that Indiana wins so Iowa has less to play for when we get them. Iowa is the better team at the moment though. Iowa 24, Indiana 20

This game is very intriguing. Minnesota is an unexpected team that could join the Michigan State-Northwestern winner, Penn State, and Ohio State as bowl eligible. They would also give themselves a very nice win in terms of positioning for that bowl. The offense wasn’t overwhelming against the Hoosiers last week, but the defense was one big play given up away from a shutout. The Gophers will almost undoubtedly find their way to a sixth win and a bowl this year. That’s a good sign for what Tim Brewster is doing in Minneapolis. Our homecoming is far from a guaranteed win.

Illinois is a team in search of a good win as well. Michigan reverted to its normal 2008 form last week. Eastern Illinois and Louisiana-Lafayette aren’t good. I did like what I saw though in the loss at Penn State. Illinois refuses to quit when it gets behind. They can’t quite make the one big play or stop they need, but they are close. The offense can do some special things, but can bog down as well. The defense could use some help, especially against good offenses. I think they’ll beat Minnesota, but it will be a good test. Illinois 27, Minnesota 21

This should be a fantastic game from two teams that have played some classics in recent years. Lake the Posts constantly rants on the disrespect that Michigan State fans give Northwestern. They still believe any loss to the Wildcats is a bad one. Two years ago it was Northwestern that had the bad loss in an absolute collapse against the Spartans in Evanston. This time around Northwestern is much better, and a win means they can dream of an outside chance at a Big Ten championship. This could also be Michigan State’s toughest roadie until they finish in Happy Valley.

The Spartans were lucky to escape against Iowa last week. Northwestern’s run defense has been pretty good, but it hasn’t faced anyone nearly as good as Javon Ringer. The closest is Iowa’s Shonn Greene, who went for 159 yards and a score in Northwestern’s last game. If Ringer goes nuts I expect the Spartans to in, but if Northwestern can stop him they will be 6-0 and we’ll likely get another shot at a ranked team next week. Because of that, Northwestern can seriously dream of 9-0 with a win Saturday. Northwestern 20, Michigan State 19

Wisconsin fans are pretty desperate if they are blaming the fact that Wisconsin’s band is currently suspended for the reason they lost at Ohio State. Unless the band is hiding a deceptively fast trombone player that could have tackled Terelle Pryor on that cut it wouldn’t have made a difference. It will be back, so no worries this week. Two weeks ago Wisconsin was dreaming of a BCS bid. If they lose this week a New Year’s Day bowl may become difficult to salvage. Illinois and Michigan State still remain on the slate, so a winning conference record may even be difficult.

Penn State really impressed me last week. Though it was a two score game or less most of the way, you had the feeling that they were always in control. Even in getting shut out the first 20 minutes Penn State was never worried. Some are giving credit to our defense for slowing them down, but the Lions didn’t have to do that much to beat us. Wisconsin should provide a much more formidable test, but the Badgers have to have confidence issues after blowing two straight fourth quarter leads. Penn State is the best team in the conference until proven otherwise. Penn State 27, Wisconsin 17

National games of the week:

There are several big games this week, so here is a quick and dirty look at each of them.

#1 Oklahoma vs. #5 Texas - This should be absolutely fantastic. Oklahoma looks completely unstoppable at the moment. They have owned Texas in the past too. As usual,t he winner likely wins the Big 12 South. Okalahoma 27, Texas 24

Notre Dame at #22 North Carolina - If only this were basketball. The downside is that if Notre Dame wins, they actually beat a legitimately good team. Hopefully the Tar Heels can help out hte world and give them loss #2 of the four needed to keep them rightfully out of the BCS. North Carolina 30, Notre Dame 17

#4 LSU at #11 Florida - LSU is a another team that looks really good at the moment. I can't respect Florida anymore after losing at home, again, to Mississippi. LSU is talking a little too much though in the Tebow-gate incident. I'll take Florida at home in the cannabalistic SEC. Florida 14, LSU 10