Share All sharing options for: Week 6 Big Ten wrap up (with blogpoll ballot) 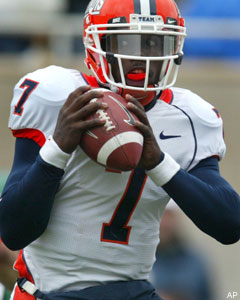 Because of some changes in the new blogpoll procedure I am moving the Big Ten wraps up to Sunday nights. This will allow me to do some more research as I'll be at a computer with internet access. Hopefully, this will also improve the quality of the writing.

Second, there will likely be a major announcement about the blogpoll coming tomorrow. Basically, all of us voters are gaining legitimacy through and agency that I can't officially say right now, but it rhymes with PBS and they often have SEC games on Saturday's. It is because of this that I must have the blogpoll preliminary ballot posted by Monday morning at 10am. Also, I'll be posting the final results more regularly as well. It's not like Purdue has to be worried about being in this poll the rest of the season, but it is still fun to follow.

11. (10) Indiana (2-3, 0-2) Result: Minnesota 16, Indiana 7 – Indiana moves behind Purdue this week because Purdue at least played a really good team to a two touchdown game. Indiana made Minnesota's defense look to be much more improved than it probably is. Indiana turned it over three times and only had the ball 22 minutes. The running game was virtually non-existent again, and the defense allowed a record day to Eric Decker. Basically, Indiana has taken a major step back. There is simply no excuse for an offense with a player like Kellen Lewis to score just seven points against Minnesota. This is the last game that I expected to be a defensive slugfest. Nearly a quarter of Indiana's yards came on the 77 yard scoring play to Marcus Thigpen.

10. (11) Purdue (2-3, 0-1) Result: Penn State 20, Purdue 6 – I don't think we really learned too much yesterday. Honestly, this was one of the dullest games I have ever been to. Purdue could have made quite a game of thing if not for its mistakes. Penn State simply didn't make any costly ones. I guess we should be encouraged that Purdue didn't thoroughly embarrass itself. That really doesn't say much. We now will be replacing our kicker with an unproven true freshman and everyone has given up on Curtis Painter. Two straight road games isn't the recipe to turn things around.

9. (9) Iowa (3-3, 0-2) Result: Michigan State 16, Iowa 13 – Iowa did what no one else has been able to do this year: they kept Javon Ringer out of the end zone. Turnovers were once again a problem. Shonn Greene wasn't. His 30 carries for 157 yards against a pretty good defense should give Iowa confidence that it can compete this year. Unfortunately, that makes three straight losses by less than a touchdown. They now face a critical game at Indiana. The Hoosiers have been surprisingly dominant the past two years, but it should be a good game since both teams need a victory.

8. (8) Michigan (2-3, 1-1) Result: Illinois 45, Michigan 20 – So much for the defense being the strength of the team. Juice Williams is not particularly known for his throwing ability, but he set a Michigan Stadium opponent records with 431 yards of total offense. The offense itself was better than it has been, but it is still not to the point that it can survive a 500 yard day by an opponent. They basically let a close game get away in the fourth quarter. At least the first quarter was pretty with Michigan leading 14-3. This week's game against Toledo will provide a good chance to work on things.

7. (7) Minnesota (5-1, 1-1) Result: Minnesota 16, Indiana 7 – Minnesota has to feel good that a bowl game is definitely in sight. Minnesota probably had the most good happen to it this week. They know they can trust the defense to at least stop someone now. Eric Decker is a big time receiver. The running game is providing plenty of balance. The offense is also keeping other teams off the field with long drives. You cannot discount the play of their special teams either, coming through with three field goals to get the win. One win is all that is needed now to get to a bowl, and they should get it.

6. (6) Northwestern (5-0, 1-0) Result: bye
– Northwestern may have benefitted the most this week with Iowa, Purdue, Michigan, and Indiana all losing to help their bowl position. The game against Michigan State this week should be pretty big.

5. (4) Wisconsin (3-2, 0-2) Result: Ohio State 20, Wisconsin 17 – I talked at length about Wisconsin may have been the best closing team in the Big Ten after the way it played in the first three games. That clearly isn't the case now, as they have blown two straight leads. The defense has been unable to get a stop when it needed to. They are now out of Big Ten race, and a visit from Penn State won't help things much after this week. At least the last four games on the schedule are the easiest games of anyone to finish on.

4. (2) Michigan State (5-1, 2-0) Result: Michigan State 16, Iowa 13 – I think Michigan State had a win over Iowa much like Penn State over us yesterday. They did just enough to pull it off before facing a tougher opponent next week. Sometimes style isn't important as long as you have more points at the end of the game. I would certainly take that with Purdue right now. The Michigan State bloggers are calling it an ugly win, but that is better than no win at all. I only dropped them because the three teams above them had better wins this week.

3. (5) Illinois (3-2, 1-1) Result: Illinois 45, Michigan 20 – I am very thankful that we don't play Illinois this year. We have enough trouble as it is with dual threat quarterbacks, and Juice Williams demonstrated he is one of the best. The amazing thing is that Illinois got things done both running and passing. They made a pretty good Michigan defense look awful at home. They now have a pair of games at home against Minnesota and Indiana before traveling to Wisconsin. I wouldn't count them out of the Big ten race yet, but having already lost to Penn State hurts.

2. (3) Ohio State (4-1, 2-0) Result: Ohio State 20, Wisconsin 17 – the first test has been passed if they are going to win the conference again. Barring a major upset, only Penn State, Michigan State, and Illinois stand in the way. You never know how tricky the trip to Evanston can be at the end of the year either. I am really impressed by the amount of poise that Pryor is already showing this early in his career. A late drive like that in one of the most hostile night venues in the country is something most 5th year seniors can't lead. Pryor did it with ease.

1. (1) Penn State (6-0, 2-0) Result: Penn State 20, Purdue 6 – I don't know how much I would give Penn State's win to its defense. In the kicking game alone we handed them a full touchdown. A fumbled snap could have meant another four as well, since Purdue could have gotten a first down on that play and later a touchdown. Once the Nittany Lions got in front by two scores you felt like it was more than secure with that defense. It was a lot like the Ohio State game last year. I also like how they ground out the clock in the closing minutes to not even give us a chance after we scored. There was still enough time that a small miracle was possible, but we never got the ball again.

There isn't much change at the top as all the top teams kept on winning. Among the more impressive teams were Texas Tech and USC who each won in games that could have been major challenges. I feel like North Carolina is a team on the rise while I would love to see Vanderbilt keep stealing games in the SEC. Maybe it's the colors, but I have forgotten what it is like to see a team wearing black and gold knock off a ranked team. Feel free to comment in the comments section (and yes, Jack, I would have moved UConn in had they beaten North Carolina).