Throw your hands in the air

Share All sharing options for: Throw your hands in the air 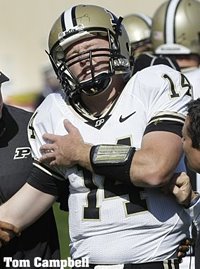 That’s just about all I can do at this point. It seems like we fix one thing with this team and three other things go wrong. I’m not as pissed off as J Money is, but right now I am pretty disappointed. For the second straight week I wanted to take advantage of some nice weather to go hiking in Brown County. I was able to watch most of the first quarter and listen to the rest on the radio while planning tow atch the tape at home. Once again, the tape won't be watched in its entirety. When McConnell and Quinn are upset with the coaching staff you know it is bad.

Today’s game was just a microcosm of the season. One thing would go well, like a couple of opening drives points, then three things would go wrong. The defense got torched again after playing pretty stout last week, but it was hard for them to defend when they were often given very little territory to defend because Northwestern was getting the ball at the 40 or better. Even at the end Northwestern handed us an opportunity with a missed short field goal, and we promptly gave it right back.

At this point I have no idea what to do. My optimistic nature tells me not to give up. I enjoy watching Purdue football too much to give up. We were spoiled by the early years of the Tiller Era, where stunning finishes and a never quit mentality was the norm. Even as recently as 2002, when we were 4-6 facing a fourth and long with the season on the line at Michigan State we somehow found away to save a disappointing season and get to a bowl. Can it happen now? Yes. Will it happen? I doubt it. Even if we do win these final three home games we need a win at Michigan State (unlikely) or win at Iowa (even less likely wince we always play terrible there).

I said before the season that I didn’t know what to expect from this team. If we won 4 games, 10 games, or anything in between I wouldn’t be surprised. Now it looks like we might beat Michigan in a battle of two of the most inept offenses that used to be good, and we might beat Indiana. Maybe I’ll feel better if something happens next week and we shock Minnesota, but I doubt it. It feels empty, and these seniors deserve better.

I came home to watch some of the few highlights on the tape a couple of minutes ago. My frustration only mounted when I saw Kory Sheets’ 76 yard touchdown run. Here is a guy that has played his ass off all season to scratch out a running game from a pass oriented team. He is putting together one of the best seasons ever from a Purdue running back. On his run, normally a huge play, he set the ball down in the end zone and walked to the bench in frustration. He acted like he didn’t even want to be complimented as he got to the bench because he was so frustrated. It’s like he sees that all of his effort is going for nothing, yet he still pushes himself so hard. He’s having an almost Alstott-like career in that he will leave Purdue as one of its most celebrated backs ever, yet will have very few team accomplishments to go with it. It’s not even a petulant "I’m doing my job, why aren’t you?" attitude. He’s giving everything he has to this, even playing hurt, for essentially nothing.

It’s how I feel as a fan writing this blog.

Positives from the Northwestern game:

Kory Sheets – He had another 2 touchdown, 160+ yard game and we lost again. Does anyone remember the days when Purdue having a 100 yard rusher meant an automatic win because it meant we were so dominant to get to that point? We’re still that type of team. We’re still a team that should win every single time we get a 100 yard rusher because of how much we pass and how little people expect from our running game. It is not Kory’s fault we kept giving the Wildcats a short field all game long. One of the jerseys in my closet is a Sheets jersey. It’s starting to get a little worn since I’ve had it for awhile. He may be the rare player that I buy a replacement jersey for because I like him so much.

Greg Orton – Greg is another player that has to be frustrated with this season. He’s a game-changer, but we can’t seem to get him the ball. Today may have been his best game of the season as we actually went deep a few times to him.

Carson Wiggs – No offense whatsoever to Chris Summers, but Wiggs has been very impressive so far. I was thinking of something today though. Two years ago Summers struggled big time with Painter as the holder. Last year Jared Armstrong did the holding and things were fine. This year we went back to Painter and Summers struggled, then today we had another missed extra point. I haven’t seen anything obvious that Painter is doing wrong, nor am I placing blame on him. Still, it is interesting that this has happened again.

Negatives from the Northwestern game:

Field position – Northwestern had 16 possessions today. Of those, 10 began at the Wildcat 40 yard line or closer. Two more began at the NU 35 or closer. 75% of the time hey had to go 65 yards or less in order to get a score. The four possessions that didn’t start that close went punt, field goal, punt, punt. Therefore, when the defense actually had some space to defend they did pretty well. Four possessions began in Purdue territory as the result of a turnover, and those resulted in 24 points. The longest TD drive of the day was only 60 yards and that came when Peterman broke a big gain for the first NU score of the day. As the radio guys said, it’s hard to lay this one at the feet of the defense when they got zero help all day long. Of course, better tackling (again) would have helped.

Turnovers – Northwestern made some, and we made them pay for them. We made more, and boy did Northwestern make us pay for them. It’s not even that fact we had five turnovers. It is the fact that they came in the wrong part of the field and allowed an offense that has had some issues moving the ball all year to have a short field. This was by far our worst game of the year for having these issues.

Dropped passes – These sounded especially bad on the radio broadcast. We were dropping every key third down, and a couple of these turned into interceptions that probably shouldn’t have been laid on Painter. Northwestern didn’t even play a particularly clean game. We were just sloppier than they were.

Playcalling – For the love of God can we please throw downfield in the first half. If I see one more screen pass I am going to scream. Defensively, how on earth can we get a big momentum building score before the half, then allow them to march right down the field and get it back in less than a minute?

I’m not even sure what to think now. The evidence left itself on the football field today. For the first time in the Tiller Era, we are just a bad, bad football team. This is the season that Tiller himself we were building to a few years ago, and the result is a 2-5 teams in which four of the losses weren’t even close. Even in 2005 I felt we had a pretty good offense, but the defense was abysmal and couldn’t get a stop when needed. It’s two best players, Bernard Pollard and Ray Edwards, were in it for themselves and Pollard especially felt like celebrating every tackle after a 15 yard gain like he personally won the Super Bowl. That team had one glaring weakness that prevented it from being a good team. This team has several and it is a crapshoot each game as to what will be good and what will be bad.

I don’t even know what to say anymore. You can't just lay it on one thing. At times,t he coaching has been bad. At times,t eh offense has been bad. At Times, the defense has been bad. All three have been very good for stretches, however small, as well. Today I reached the point of turning the radio off at one point when it got so laughably bad after the fumble and big return by Northwestern in the fourth quarter. The only other time I can think of giving up on a game was the 2005 Notre Dame game, when I was so pissed off I left at halftime.

I want to be hopeful for this time. I keep telling myself, "If they just do this and pull together next week, we’ll come together and get to a bowl." Well, we have officially run out of next weeks. Even if we win the next two games, which is more than possible, we may have run out of next weeks. It is not even a home vs. road issue anymore. For four straight weeks we simply have been outclassed by our opponent in every phase of the game, save last week’s defensive performance.

I don’t even know what to think anymore.