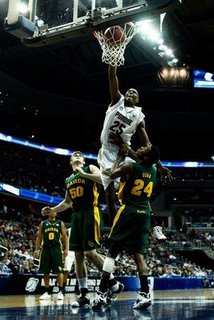 Yesterday of the back court was exciting. Today's look at the frontcourt and general outlook on the season is a bit more questionable. Rebounding was a major issue last year. In the second round of the NCAA's we ran into a team that was very similar to us in Xavier. The main difference was experience and strength. Their guys were able to outmuscle in the paint based on their experience. They were a good look at what we want to be in the future.

Purdue didn't bring in any massive players in order to bang down low with the bigger teams it will face. If all reports are to be believed, it didn't need to. Robbie Hummel has already been named as the preseason Big Ten Player of the Year, while While JaJuan Johnson is expected to have developed into a solid true post presence in his sophomore year. A couple of key contributors, one a former starter, are expected to round an area that needed improvement, and got it in a big way.

Hummel is a guy that has enormous hype placed on him this season. Fortunately, there are enough weapons around him that we don’t necessarily need him to perform at a high level each and every night in order to win. That is why I think this team will be great. They all feed off of each other. They all played together successfully last year and when one was down, the others picked him up. It’s almost like something clicked in the loss in East Lansing. When we played the Spartans very close in a game no one gave us a chance in its like everyone began believing. Robbie can do everything. He can shoot, rebound, and defend. The biggest play he made all year may have been the block at the end of the Wisconsin game in Mackey.

That is not to say we don't need Robbie Hummel. He missed the first Michigan State game last year with the flu, and had he played it might have been the difference between victory (and later, a Big Ten championship) and defeat. Against Xavier he was held to just seven points on 2 of 10 shooting from the field. No one is irreplaceable, but losing Hummel would be a more serious blow than losing about anyone else on this team because of his versatility.

Johnson has been dubbed as the guy that can send this team into the stratosphere. He probably has the most pressure on him to perform, but again, others are there to pick him up. Everyone was excited when he gave us just a taste of what he could do with a 10 point, 8 rebound effort against Baylor in the NCAA's. He is stronger this year and had a very good performance during hte Australian tour.

I don’t think his play will be as critical as those who will be giving him a few minutes of rest each night. Two years ago against Florida we went with one post player against their huge line and nearly pulled off a major upset. Carl Landry was very good. He is getting well-compensated this year in the NBA as well. JaJuan could be better, and if he can get help from Calasan and even Reid for a few minutes a night it makes us better. If Calasan and Johnson can both log minutes at the same time that gives us even more versatility. Then we can go big if we need to or small if we need to.

Even if Johnson develops into an absolute beast in the post we are still a team without an overwhelming amount of size. I think it is amazing that we won as many games as we did last year when we continually got owned on the boards. Despite Johnson’s development we still need these two guys to contribute in case of foul trouble, injury, or simply just to give him a break every few minutes. Teams that rely on a dominant big man and only one always run into trouble when that big man gets taken away for any of the reasons above. Because of overall talent we won’t suffer as much, but we will suffer less if these two can play.

I really like Calasan as a player. I think he will take a major step forward now that he has a year of Division I basketball under his belt. He is another guy like Marcus Green that can step forward and provide 10-12 points of unexpected offense any given night. He also has a great attitude and is almost like a Bosnian Brian Cardinal. Calasan can hit hte occasional three as well, meaning he is not chained tot he paint when he is in there. I would love to see him get low and bang with some of the bigger bodies out there to take some of the heat off of Johnson.

With Reid, his expectations are so low that any contribution will be a bonus. His size alone is reason enough to give him a look every now and then even if only to take up space and absorb fouls. Hell, Chris Dudley had a long NBA career for the Knicks based on taking fouls instead of Patrick Ewing. As far as I know, that was Dudley’s only useful basketball skill. If Reid can just give us five good minutes a night with a couple rebounds it takes a little pressure off of everyone else.

It is tougher this year, but most of the difficult games are at home or on a neutral court. The Duke game is going to be absolutely huge. For some reason we have always played the Blue Devils very well. Who can forget the cold night in Alaska five years ago when we ran the Blue Devils off the court for a big early season win? As the number one seed in the preseason NIT we are favored there, and I certainly like our chances to beat Duke in Mackey. I cannot wait for that game, because it will be rocking. Even my non-college basketball loving wife is excited to go. In her own words, "You’ve been talking about it so much I’m excited to go and I think college basketball is boring."

If we win the NIT and get past Duke there is a strong chance we will be unbeaten going into Big Ten play. Considering what will be a very high preseason ranking, we could be #1 in the country by then. I am dreaming of course, but this team is just that good. The Big Ten looks to be top heavy again with four heavyweights of Purdue, Wisconsin, Ohio State, and Michigan State at the top, but Illinois and Minnesota are good enough to get us in road games. Penn State could be tricky too.

Much has been made about how this team will handle being the hunted. I am of the school that thinks the Australian trip with a couple of tough losses were good for this team. That, and the fact that coach Painter is already reminding them that preseason expectations mean exactly diddle squat. He is not going to let them sit back and rest on last year. Despite all the praise heaped on them in the past few weeks they have yet to accomplish a single thing. There will be the unavoidable rough spots, but I am confident coach Painter will get through them. 18 home games will helps, especially since Mackey Arena is once again a home court advantage again. Only an Ohio State team two years ago with multiple first round draft picks and the unexplainable Wofford game a year ago have been losses in the last 24 months.

The Off the Tracks official prediction for the year is a 27-4 record, going 15-3 in the Big Ten and winning the title. That should be good enough to get a top 3 seed in the NCAA’s and a trip to nearby Dayton for rounds 1 and 2. As for that tournament, I am saying we make the sweet 16, with a berth in the elite 8 depending on draw and matchup.

I love this team. I love the way they play egoless basketball and work to get everyone involved toward a common goal. In the 2006 tournament I hated Connecticut. I hate the way they were a team of incredible talent, but didn’t play together. They looked like they were only in it for themselves and trying to get to the NBA. They were incredibly talented yes, but if they had played like Purdue plays they would have destroyed everyone in their path on their way to the title. Instead, they very nearly became the first #1 seed to lose to a #16 and won two more games they should have lost before losing to George Mason.

Purdue is not like that. These guys would bleed for each other. They scrap, fight, and make teams play their style of basketball. Based on talent alone Florida should have wiped the floor with us two years ago. Instead we forced a better team to play our pace and we nearly pulled it off. The good teams are the ones that can do that. The great ones are the ones that can not only do that, but adapt to play a number of styles. Last year we were a grind it out team. Against Baylor in the tournament we played their style and ran them out of the gym. I love that versatility.

Mostly I like this team simply because it is fun to watch. Basketball has always been my first love both as a sport to play and watch. Growing up in Indiana it is hard not to have that. It is one of the few areas where I can totally lose myself in the joy and flow of the game and forget about anything else that is going on at that time. When the game is played as beautifully as this team can play it when it is on it very nearly brings me to tears. Not only are these guys talented, they love playing with each other. Everyone compliments everyone else very well. Scott Martin apparently had a problem with this and removed himself from the equation. I don’t think we will even miss him. If he turns another ankle he will miss Nemanja Calasan carrying him off the floor.

The dream of a national championship may still be a little far off, but who would have dreamed a Big Ten title was ours for the taking last year? It would have been a Big Ten title if not for the loss in Bloomington just before Indiana imploded. I think this season will be a step toward two real shots at the 2010 and 2011 titles. As brother-in-law has always said though, "We’re here, the fans are here, they came to see us, they’re keeping score. Why don’t we go out and try to win this thing now?"