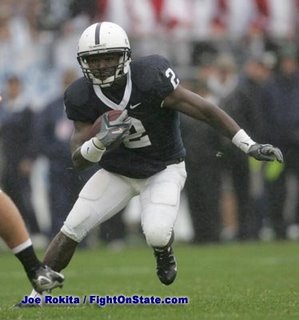 Coming into the season I felt we had our best chance of upsetting a ranked team against Penn State. They were coming to Ross-Ade. They had an inexperienced quarterback, and the Sean Lee injury raised some questions on their defense. Five weeks into the season this looks like a total mismatch on paper. The Nittany Lions have strengths where we have weaknesses. They have yet to be seriously challenged, but the only team of note they have played thus far is Illinois. In that game Penn State did a fantastic job of answering every single challenge the Illini brought forth.

The optimist in me says that Penn State hasn’t played anyone and Illinois may not be as good as advertised. Still, the Illini’s pair of losses are to teams currently ranked in the top 6. There is no shame in that, and they held their won in each. Though the game was close for much of the first half you had to feel like Penn State was never worried Saturday night. Unless they stumble or look ahead to next week’s big trip to Wisconsin we are likely in serious trouble.

Penn State is averaging almost 50 points per game. They rank 9th in total offense at better than 515 yards per game while we ranked 107th defensively. Evan Royster is already halfway to 1,000 yards on the ground and Daryl Clark has given them a threat in the passing game that Anthony Morelli never did. More importantly, Penn State doesn’t make mistakes. Many are saying that we need to be the beneficiary of turnovers in order to have a chance. Penn State has just one interception and has lost five fumbles. Most of the time the Nittany Lions have had enough of a lead that it mattered little.

Penn State has a surprising amount of balance offensively. They have rushed for 100 yards more than they have passed, but the overall numbers are high enough that the difference is truly negligible. Clark has been a threat both ways with 896 yards passing and 131 rushing. He has rushed for three touchdowns, but his running is not an absolutely necessary part of the offense. Even if he gets hurt, comes down with the flu, explosive diarrhea or otherwise can’t play for some reason Pat Devlin has been respectable in limited action (18 of 35, 250 yards and two scores). The beauty of having talent like Penn State and winning your first four games in blowout fashion means everyone gets game experience. That only helps in case the unexpected happens.

Royster has been a quality running back, adding seven touchdowns to 518 yards. He is gaining almost 8 yards per carry, and that number will go up unless our defense is drastically different this week. Stephfon Green has also played well with 314 yards and four scores at a near 7 yards per carry clip. Penn State averages a staggering 267 yards rushing per game.

The passing game is far from weak. Jordan Norwood (18-318-4), Deon Butler (16-272-2), and Derrick Williams (14-188-1) are among the three best receivers in the Big Ten. They are even better now with Clark getting the ball to them regularly. Most importantly, he spreads the ball around fairly evenly. There isn’t one of them we can point to and say, "We have to stop him and we’ll do well." Five other players in addition to this trio have also caught touchdown passes. Williams is especially dangerous as he returned a kickoff for a TD against Illinois, ran for a TD, and had 6 catches for 75 yards and another score. In a related note, he is now the mayor of the great Champaign/Urbana area after completely owning the Illini.

We can also forget about pressuring Clark. His offensive line has allowed just four sacks in five games. That line is led by one of the best linemen in the league in A.Q. Shipley. They are clearly effective at both pass protection as well as opening holes for Royster and Green. Oregon State’s head coach called their line one of the best in the country. From the sounds of things, even the perennially injured, yet hyped Jason Werner wouldn’t make much of a difference if healthy.

Penn State’s defense means we can forget about getting into an offensive shootout. We haven’t scored an offensive touchdown against them since 2005. Their last trip to Ross-Ade ended in the only shutout of the Tiller Era. So far the Lions are only giving up about 13 points per game and are in the top 15 nationally in both total yards and against the run. This is all without probably their best defensive player in Sean Lee, who is out for the season with a knee injury.

We may be able to get something going with the passing game, but that is a big if as Penn State’s numbers are pretty good when you consider they have held a lead for almost every minute of the season. As a result, teams have been forced to pass at will and it hasn’t worked. That fact also contributes to lower rushing numbers, but I think "Linebacker U." has a big enough say in that already. Illinois has been the only team to put even a marginal scare into them, scoring 24 of the 64 points Penn State has surrendered.

Navorro Bowman leads the defense with numbers that touch nearly every statistical category. He has 45 tackles, 5.5 of those for loss. He’s gotten to the quarterback for three sacks, picked one pass off, knocked down 3 more, and has forced a pair of fumbles. When we have the ball we must be aware of where #18 is on the field at all times. The remainder of the defense is very balanced, but has made life a living hell for opposing quarterbacks.

Aaron Maybin has been the biggest terror in the backfield. He has six sacks though five games with two more tackles for loss. Calling him disruptive is a gross understatement. He’s not the only one that excels at getting to the quarterback as Josh Gaines also has three sacks. As a team, Penn State sacks the quarterback three times per game, and has an impressive 27 tackles for loss.

The secondary is just as balanced as the Nittany Lions have eight team interceptions from eight different players. Granted, some of these have probably come against inferior competition, but it is still impressive. All told 12 players have at least 10 tackles to form a true team defense. Illinois had some success against the Lions by mixing things up fairly well and keeping Juice Williams mobile. This would be an adjustment, however, and that is something I highly doubt this Boilermaker team will do.

Penn State is running like a well-maintained machine lately because all the parts are working. The offense moves the ball, the defense stops other teams, and the special teams give them field position or points all day long. It begins with the return game. Derrick Williams is as dangerous as it gets. He is averaging 36 yards per return and already has two returns for touchdowns in just nine attempts. Chaz Powell also has one 69 yard return, so Penn State will get in good field position on kickoff. If we’re not better than last week they will erase a score quickly with an even bigger return. They haven’t done as well on punts yet, but with Williams returning kicks he is always a threat.

The Penn State offense is so good that opposing teams have had few opportunities to return punts. Jeremy Boone is averaging almost 42 yards per punt and Penn State has limited kickoff returns to less than 24 yards per attempt. Notre Dame kicked away from Desmond Tardy last week, and after we got them on the opening kickoff a year ago you can bet Penn State will do the same.

Kevin Kelly is an accurate kicker who makes sure that the Nittany Lions get points when they get close to the goal line. He is 5 of 6 with a long of 52 yards on field goal attempts, while Collin Wagner made his only attempt of the year as well. Kelly is a perfect 30 of 30 on PATs. Considering that the 30 PAT’s mean Penn state is getting in the end zone 6 times per game I doubt field goals will come into play. If they do, it is yet another advantage.

So how are we going to do this on Saturday? Well, the first step is attitude. I know I sound like Lou Holtz here (much as it sickens me), but from Joe Tiller on down to the third string punter we have to believe we can pull this off. We should be able to tell within five minutes if we have a chance. If we don’t have the right attitude coming in it could be over that quickly. I am encouraged that this is largely the same team we played fairly well against in Happy Valley a year ago. It is also their first real road trip of the year since Syracuse is so bad they don’t count.

Attitude isn’t only believing we can win. It also means we have to adjust on both sides of the ball and keep teams guessing. We are capable of that. We did it against Oregon. There were moments in that game where I remarked that someone must have told Joe it was 1997 because he actually tried a few different things. We don’t have to do wild trick plays either. An example would be having Siller throw the ball when he lines up at quarterback. He has yet to do so, so they automatically expect run. Just tell him to throw on a certain route if it is there, or tuck and run if it’s not.

Second, we cannot turn the ball over. We must also give Painter time to throw against a team that will rush him. Curtis has a good game in him this year. It’s time for him to play like he has been hyped coming into the season. There have been whispers of a benching in his future if he doesn’t improve. Nothing would be sadder than one of the Big Ten’s best quarterbacks (statistically speaking) finishing his career riding the pine pony. This is likely his last realistic shot at beating a ranked team, so he must take advantage.

Defensively we need nothing short of the complete opposite performance that we have seen so far (except for the first half against Oregon). Unfortunately, I don’t know how we will do it. If we stack nine guys against the run they have three elite receivers that can run circles around us. If we play 6 DB’s they have backs and a quarterback that can make yards in a hurry. Illinois had better personnel, but could only handle them for a time. Oregon State was obviously good enough to slow down a very good USC team, but got blown away in Happy Valley. I don’t even know if a similar effort from the first half of the Oregon game will be good enough because of the balance Penn State has.

The bottom line is that if we somehow pull off this upset it will be the biggest win since at least the 2000 season and maybe of Tiller’s career. The saving grace to our performance to this point in the season is that we have a clean slate in conference play. Going out and knocking off the best team (at the moment) in the conference would go a long way towards redeeming the season. It remains to be seen exactly how we would pull off such an upset. I believe we can do it, but it will take a very special effort that I am not sure we can deliver anymore.