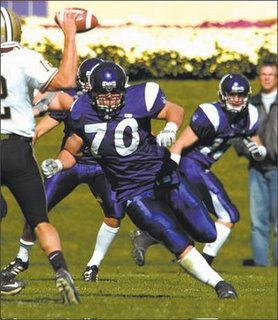 In response to my questions and answers on Tuesday with Lake the Posts, here are my answers to their questions over at LTP. Also, the guys from Boiled Sports chipped in with their own two cents. Or is it six cents since there are three of them? I don't know, my brain hurts.

Also, for what it's worth, here is this week's blogpoll. I guess it will be awhile before America realizes that our effort alone should have us in the top ten, since that is what we are measuring things by now. The only major change I had from my draft ballot was moving MIchigan State up to #15.

If Purdue is going to turn this season around and salvage something it must begin the journey Saturday afternoon in Evanston. Northwestern is our most common homecoming opponent, but the Wildcats are turning the tables on us by making the Boilers their homecoming this year. The Big Ten thinks this is a rivalry, as they join Indiana as the only opponents we are guaranteed to play every year. Joe Tiller has liked that as well. He is 9-2 against the Wildcats in his career, a mark matched only by his record against Indiana.

It’s an unfortunate stigma, but everyone in the Big Ten looks at Northwestern as a winnable game whenever schedules are released. In the past 14 seasons they have more Big Ten championships (three) than teams like Iowa, Penn State, Wisconsin, Michigan State, and Purdue, but they are continually disregarded as, "just Northwestern". Even at 5-1 this year, Purdue fans are looking at this game as a great chance to get a win and turn things around. We cannot take them for granted though. This is a good team. They are playing their homecoming game and need one more win to get bowl eligibility out of the way and dream of something bigger.

Perhaps the two biggest reasons that I have hope for a victory on Saturday lie on the Wildcats’ offensive side of the ball. C.J. Bacher hasn’t come close to putting up the senior-year numbers of his predecessors while star tailback Tyrell Sutton is battling injuries once again. Two years ago in Evanston was the one game in which Purdue was able to limit a team’s running game and make them go to the air. The results was one of our better victories in a season full of bad ones. Northwestern is only averaging a modest 24 points per game, and they haven’t faced a murderer’s row of defenses in their schedule.

Even with the injuries, Sutton is a good one. He has a 5.5 yard per game average and 603 yards on the ground for the season with five scores. They aren’t eye-popping numbers like some other backs we will face, but he is consistent enough to be a factor in every game. As Lake the Posts said earlier this week, he has done plenty of damage as a receiver (24-200-1). He is probably as versatile of a back as we will see the rest of the year in terms of running and catching the ball. He is helped out in the backfield by the capable Omar Conteh, (141 yards, 2TD) and Bacher who is mobile (139-1), but Sutton is easily the biggest running threat.

A similar defensive effort to last week should result in a win. If we can contain Sutton, or if he is not able to go as well as he has been, the Wildcats will become very one-dimensional. They have a better passing game than Ohio State, but Bacher hasn’t been lighting up the scoreboard through the air. His numbers (138-236, 1325 yards) are decent, but not great. He also has a tendency to throw picks, having thrown eight against just seven touchdowns. Northwestern has been generous with the football, turning it over 11 times in six games. Since we haven’t forced a turnover in the last three games we need to take advantage of this factor.

Northwestern’s receivers are very balanced with four guys having at least 23 receptions, but none more than 29. Rasheed Ward (29-278-2) leads in total catches, but Ross Lane (28-332-0) leads in yardage. As mentioned above, Sutton is a threat to catch passes, while Eric Peterman (23-269-2) can do damage as well. The longest reception of the season is for only 45 yards, so the Wildcats lack a true deep threat much like us. The possession game can get them down the field, but this isn’t a team that hits a lot of home runs.

The real battle will come on the lines. Our own defensiveline played the game of its life last week, and if it can do it again this week we should have a good battle upfront. In Lake the Posts’ own assessment, the Northwestern offensive line has played incredibly well this year. They have given up just three sacks on the season, so Bacher should have plenty of time. If we get into the backfield as much as we did last week we have accomplished something and the Northwestern offense should sputter.

As good as the Northwestern offensive line is at protecting the quarterback, its defense may be even better at getting to the passer. The Wildcats have racked up 19 sacks from 10 different players over the course of 10 games. They define the term "Swarming unit". Corey Wootton is the main pass-rushing specialist with 4.5 sacks and eight tackles for loss. He easily tops the team’s list in both categories. Vince Browne (3 sacks) and Quentin Davie (2.5 sacks) are also known to cause havoc in the backfield. John Gill can also cause problems with a pair of sacks and a pair of fumble recoveries.

Safety Brad Phillips is one of the main instigators on the defense. He leads the team with 52 tackles, a sack, an interception, and a pair of pass break ups. He’s not as fearsome as Lauranaitis a week ago, but he still is someone we need to be aware of. The rest of the defense is a unit that plays very well together. Northwestern’s offense hasn’t been stellar even against weak competition, but the Wildcat defense has gotten the job done by simply allowing fewer points than the offense generates. Northwestern gives up a modest 114 yards on the ground and 201 through the air. Even last week they didn’t give up a ton of yards, but costly turnovers and special teams play hurt them badly.

All Purdue really needs to do is gain some sort of an edge against this defense, whether it comes on the ground or through the air. Northwestern is prone to turning the ball over, so we must score when it does. Though the defense is good, it’s not as good as what we have faced the last two weeks. There will be more space, and it is time for Curtis Painter to exploit that space.

Armando Villarreal has been a pleasant surprise for Northwestern fans, getting the Wildcats some much needed points at critical junctures. He had a four field goal game against Southern Illinois and is 11 for 13 on the season. He hasn’t had much need to kick extra points on the year, but 14 of 15. He doesn’t have a particularly big leg though, with just one attempt outside of 37 yards. Since a 37 yard field goal means the Wildcats got the ball to at least the 20, that’s an awful lot of trips to the red zone without touchdowns.

Both return games haven’t been great with no scores and only 8.3 yards per punt return and 21.6 yards per kickoff return. Northwestern can cover kicks well though, giving up just 18.3 yards per return. This is imperative as we have gotten next to nothing after Tardy gave us some big returns early on. Stefan Demos averages 38.1 yards per kick, but is pretty good at dropping them inside the 20 with 12 such punts in 29 attempts. He also has no touchbacks, so if Northwestern stalls at midfield we had better be prepared to dig our way out of a deep hole. Punting was an issue last week as a big return set up Michigan State's first score.

We need this game. Now is the time for us to go into must-win mode, because getting to the postseason from 3-4 is a lot easier than getting there from 2-5. Northwestern is a good team. They have plenty to play for on their own schedule as they can still be 8-1 before a difficult finishing kick. With just a little bit of help, they can be right there for the Big Ten title and at least have their own say at home against Ohio State.

That said, the offense is clearly struggling a little bit with a less than healthy Tyrell Sutton and a subpar C.J. Bacher. When Northwestern has had success offensively it has gotten above-average quarterback play and has had a dangerous running back that can both run and catch the ball. Both are doing what they need to do, but not as effectively as past Northwestern greats when the offense has been phenomenal.

In my conversation with Lake the Posts earlier this week he talked about how special teams, turnovers, and field position were major issues against Michigan State. The Wildcats outgained the Spartans by more than 160 yards, but a big punt return, a fumble on a kickoff, and an inability to turn red zone opportunities into touchdown made a huge difference. These issues were not new to the Michigan State game just because the Spartans were the first good opponent Northwestern has faced. We must take advantage of this.

That is really the key to Saturday. Northwestern is the first team we have faced since Notre Dame that has major issues. The Irish couldn’t run the ball, but the fact that our run defense quit on us allowed them to overcome that issue for one game. If Northwestern is unable to overcome its issues, like the Irish did, I like our chances. Central Michigan’s major issue was pass defense. It overcame that issue, and it nearly cost us the game. It is unfortunate at this point that we must rely on another team’s screwups in order to win, but I’ll take a win however we can get it.

Offensively, we have to take care of the ball, protect Painter, get Kory Sheets some space to run, and score points if we can get close. Defensively the Northwestern offensive line has had trouble opening running lanes, so we must make sure they continue to have trouble. If we can get to the quarterback and sack Bacher once we’re already doing better than most anyone has done against the Wildcats all year. They are having issues with their playcalling as well, and the deep receiving threat is a myth for them. I don’t want to say we should sit back and wait for them to make mistakes, but the mistakes will come if Northwestern continues to play as it has all year. If we contain Sutton (by contain I mean keep below 100 yards) and not allow the deep ball, we should be able to frustrate their offense.

Finally, we need better play from Painter. Curtis, stop screwing around and play like you’re supposed to be able to play. Since this isn’t a "big game" he may relax and finally have a breakout. We have to have him lead touchdown drives if we are going to win. In my mind, this is his last chance. If he can’t get the offense going Saturday and get some point it is Joey Elliott time.