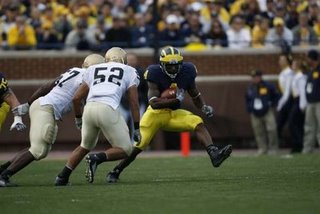 Saturday could be the worst affront to American football since the Indiana game two years ago. At least Michigan was expected to struggle some this year. Purdue has been bad in a year when much more was expected. Because of overtime rules someone has to win this game. It won’t be two inept offenses ending in a 0-0 tie like the 1983 Oregon-Oregon State contest. Someone has to score once, even if it is by accident.

This could quickly be reduced to a slapfight. Both teams need to win to keep the faintest of bowl hopes alive. Even then, the future doesn’t look good with road games remaining for each against ranked opponents. I never thought I would see the day where I looked at the schedule and was more relieved to see Michigan coming to town more than Minnesota. The wolverines once again present us with a winnable game. Unfortunately, I have little confidence that we will be able to win it unless Michigan loses it.

One game in particular stands out for the Michigan offense. Toledo gave up 35 points in its home stadium in a 35-16 loss to Florida International. FIU is consistently one of the worst offensive teams in Division 1-A. That same Toledo team waltzed into the Big house just a few weeks later and won 13-10 without even scoring an offensive touchdown. Michigan helped them by allowing a 100 yard interception return and missing a game-tying field goal from inside the 10 yard line at the end. In my opinion this is worse than the Appy. State loss because at least the Mountaineers moved the ball and made some very big plays. At least Michigan moved the ball against them too!

If possible, Michigan’s offense may actually be worse than our own. We have turned the ball over 19 times and missed seven field goals to show our number of missed scoring opportunities. Michigan has 24 turnovers in eight games and is just 5 of 8 on field goals. In short, this game should be accompanied by paper bags being handed out to the crowd as they enter the stadium. Michigan ranks 111th nationally in total offense and 102nd in scoring. We carry a ranking of 71 and 93 in those respective categories. I would give us a slight edge based on that alone, but the quarterback situation handicaps us even more.

It is not like Michigan has a definite answer to its own quarterback woes. Steven Threet (89-172-6, 7 TD’s) and Nick Sheridan (29-54-5, 1 TD) have split time at the position with Threet getting most of the snaps. The Michigan passing game is downright awful with either player. Michigan quarterbacks have been sacked 15 times and have rushed for 217 yards in an offense designed to have the quarterback run the football. Neither player has proven to be effective at moving the ball against anyone, and the Wolverines will struggle until they find a quarterback that can. This can be laid solely at the feet of coach Rich Rodriguez because there is no excuse for a program with Michigan’s talent, tradition, and history to get this bad, his fast.

What success Michigan has had comes from a ground game that has the potential to be good, but often gets in its own way. Sam McGuffie is a promising young back with 470 yards rushing and three touchdowns on the season. Purdue fans will remember Brandon Minor coming in and having a field day last season after Mike Hart left with an injury at halftime. Minor has 258 yards and five touchdowns. Other than Threet (183-2) no one else ahs done much on the ground for the Wolverines. Michigan could be even more limited as McGuffie is questionable for this week’s game with a head injury sustained last week.

The good news is that we get a break from facing a great running back before facing Javon Ringer and Shonn Greene in the next two weeks. It should be simple, especially since the run defense has preformed admirably of late. Unfortunately, I remember the Notre Dame game. We are more than capable of turning Brandon Minor into LaDainian Tomlinson for an afternoon like we did with Armando Allen.

The passing game should be even less of a threat. The operative word there is should. In addition to having thrown 11 interceptions, Michigan doesn’t boast a receiver with more than 350 yards. The Wolverines’ passing game is probably less effective than our own. Martavious Odoms leads the team with 32 catches for 329 yards, but hasn’t found the end zone. Greg Mathews (22-259-1) and Odoms are the only two receivers with more than 100 yards receiving. McGuffie (18-136-1) is questionable as mentioned, and we actually figured out how to defend a running back screen last week. Because of that we might be able to stop Michigan entirely with a defense that hasn’t play too poorly of late.

My bet is that Rich Rodriquez was waiting for this game alone to spring his secret weapon against us as far as the passing game goes. His name: Roy Roundtree. Had Roy kept his commitment to Purdue he could be one of our leading receivers. Instead, the only thing #16 has caught this year is a series of splinters in his butt since he hasn’t moved from the bench.

Michigan’s defense has been much like our own in that it has had stretches of good play only to be left out to dry by the offense. As poorly as he has played this year, Curtis Painter at least gives us a chance to win this game if he plays. If he is in there, Michigan must at least respect he pass. If not, they will load up to stop the run like the Gophers did and dare Siller to beat them through the air. Siller will need to show marked improvement with the additional reps he gets this week if we want to move the ball through the air with him playing.

Both Painter and Siller will need to spend the day running from Brandon Graham. The defensive end is a beast with 8 sacks and 13.5 tackles for loss. He will be in the backfield most of the day, especially since our offensive line is currently in shambles. Michigan also has a balanced pass rush behind him. The Wolverines have 19 sacks on the season spread amongst ten players, but Graham is the only player with more than two sacks.

The run defense is also respectable at 126 yards given up per game. I maintain that Kory sheets is not the problem when it comes to running the ball. The fact that no one else is a threat to run the ball for us is the problem. Sheets has 806 yards on the season, but the next highest total of anyone on the team is Siller with 55. 17 of those came last week. The Michigan run defense doesn’t have to be that good when it already knows Sheets is the only one that will be rushing the ball. Defensive Tackle Terrance Taylor leads that attack against the running game by plugging up almost anything in the middle. He is allegedly the team’s best NFL prospect.

Linebacker Obi Ezeh leads the defense with 75 tackles and an interception. He has six stops for loss, but has yet to record a sack on the season. Safety Brandon Harrison is also pretty good at defending both the run and the pass. He has 53 tackles, two for loss. The secondary as a whole can be passed on. Michigan ranks 101st in the country in pass defense, meaning that if Painter can play and finally have a successful game it will help our chances immensely. Brian Hoyer threw for 282 yards and three scores last week. The defense also allowed 194 yards and two scores to Javon Ringer.

Where Michigan struggles defensively is that its offense barely gives the defense any time to rest. Opponents have the ball almost seven minutes more per game than the Wolverines do. We’re in almost the same boat ourselves, but to have success we must have sustained drives and keep the Michigan defense on the field. If we can quickly end their drives and build a lead the Wolverines do not have enough of an offense to come back. The Wolverines have given up almost a 3rd of their points in the fourth quarter. They have scored only 14 points all year in the third quarter, so that is where we must make our move.

The Wolverine offense has been a little like Northern Colorado’s in that they often don’t get close enough for field goal attempts. This group is often a touchdown or bust group, especially since it has trailed most of the season. Even so, K.C. Lopata is just 5 of 8 on field goals. His miss from 26 against Toledo shows he is far from reliable even when the Wolverines do get close.

Michigan does have the best punter in the league in Zoltan Mesko. Aside from having a badass name like Zoltan that makes it sound like he should be crushing skulls with his bare hands, Mesko averages 44.6 yards per kick and has buried opponents inside the 20 yard line 18 times on 53 kicks. He only has two touchbacks as well, so he is very good at what he does. Teams are only returning punts for an average of 2.7 yards per return. We shouldn’t expect anything from the punt return game, but it’s not like we had anything anyway.

Michigan’s own return game isn’t stellar. The Wolverines are averaging 21.2 yards on kickoffs and 5.1 on punt returns. Odoms returns most of the kicks, while Donovan Warren handles punts. This is a departure from what has been a major strength for Michigan in the recent pass, but remember last year’s game turned quickly on a muffed punt of our own. We can’t afford mistakes on returns because we’re certainly going to have them elsewhere.

I think this game will be very simple. If Curtis Painter plays and can even be marginally effective we will win. He has been far from his best this year, but he at least gives us a threat in the passing game. The downside there is we lose a running threat with Siller. This is our last chance to salvage something from this season. It is time to play both Siller and Painter at the same time so teams must prepare for both. If we get a similar effort this week from our defense as we got against Minnesota we can stop Michigan’s pitiful offense. If that is the case all we need is a couple of drives from the offense that result in points.

I like playing Siller and Painter both because Siller gives them another thing to think about on the ground. Kory Sheets has provided 86% of our yards on the ground this year. That’s way too high of a percentage. We’ve got to develop other rushing threats to capitalize on his big play ability. Unfortunately, Siller is not any kind of a passing threat yet unless he shows dramatic improvement in practice this week. Plus, if Painter can’t go and Siller gets dinged up we’re down to scout team quarterback Chris Bennett.

Michigan is also banged up in its own right. McGuffie is their most dangerous offensive weapon, and he may be out. This could easily turn into a punting contest between Chris Summers and Zoltan Mesko.

I don’t even think we need a complete game. We just need a win to have something positive to talk about. I don’t care if we win 3-0 on a 55 yard field goal from Wiggs because that’s as close as either team can get to scoring. A win would wash away some, but not all of the stink of the past five weeks. The defense is capable of doing its part, and I think the offense can do just enough to not be as craptacular as theirs. A win also means the bowl hopes, however faint they are, can stay alive for another week.