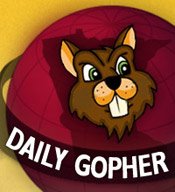 I am celebrating this 300th post in OTT history by sitting on my butt and letting someone else take over. Tom over at the Daily Gopher approached me this week with some questions about the Boilers for our homecoming contest this Saturday. Tom does a great job of compiling the Big Ten bloggers' pick 'em standings each week. He is the former publisher of Gopher Nation, which joined with Paging Jim Shikenjanski to form the Daily Gopher over at SB Nation. Here is what Tom had to say about the Gophers, with his answers to my questions going up tomorrow morning. This is an excellent comment to yesterday's Minnesota preview.

Off the Tracks: 6-1 is certainly a departure from 1-11 last year. Are the Gophers way ahead of schedule by your perspective? Will things continue to grow from here?

The Daily Gopher: If the team can keep up with the growing expectations then this team will play in Pasadena sooner than even the most optimistic Gopher fan thought. Realistically though, this team is much further along than any of us imagined. In August I think most Gopher fans would have been pleased with 5 or 6 wins including a conference win or two. That would show improvement and would greatly aid in recruiting. It is amazing how expectations have changed over a couple months. At this point people will be disappointed if we don't get to eight wins.

Will things grow from here? Things are looking good. We start one senior (TE-Jack Simmons) on offense and just three on defense. Combine the return of nearly all of our impact players with the experience gained by this year's freshmen (a top 20 recruiting class) and things are looking up for Gopher football.

OTT: Much has been made of the difference in turnover ratios from last year to this year. How has the defense gotten that much better after being so awful?

TDG: There are a number of reasons why the defense is better. First of all Brewster added a few JUCO transfers who immediately brought a new level of athleticism and talent to the defense. Secondly there were two position changes that have had a significant impact on the defense. Most notably is the move of the former walk on, wide receiver Marcus Sherels to corner. Sherels is arguably our best cover corner and a undoubtedly an upgrade over anything we threw out there in 2007. Thirdly I think there is a comfort and confidence with this defense. They are no longer wondering about what to expect from Brewster and his new staff and can focus on their responsibilities. Then they had some early success which has given them a confidence they never had last season. I think that Ted Roof has been a great teacher and is the reason they are playing with this comfort and confidence.

OTT: Describe the maturation process of Adam Weber and the rest of the offense if you would please. Eskridge seems to have emerged as a very nice surprise in this.

TDG: This is once again all about being comfortable in the system and with the coaching staff. The 2007 offense was led by a r-freshman QB trying to learn a system that couldn't be more different than what was run the year before and they were adjusting to a brand new coaching staff. There were many quotes this August about how a year ago they spent their practices trying to figure out how to line up but now they are able to focus on execution. Brewster is fortunate that he inherited a QB who is capable and well suited for a spread offense, Rich Rod is facing the same issues as the 2007 Gopher offense but he is lacking a QB. Weber has matured and grown into the offense. He is is a rare sophomore captain who is leading the offense on and off the field.

Eskridge has been a pleasant surprise. He is dangerous out in space but isn't the kind of back who will wear down a defense. He is dangerous on screens and flares (Ed. note: great, we can't defend screens for ANYTHING!) but it is hard to get a good read on just how good he is because our offensive line has really struggled for much of the season and his holes have not been very big.

OTT: Seriously, what is Tim Brewster doing to lure such good recruits to Minneapolis? Is it the new stadium? Big City campus? Free bags of crack? j/k

I have no idea how he was able to get some of the recruits he did. First of all his positivity and infectious personality is contagious plus he worked at it very hard. He stated a year ago over and over that EVERYTHING they do was done to boost recruiting. The previous staff treated recruiting with disdain and routinely pointed out the challenges faced at Minnesota (Ed note: this refrain sounds familiar). Brewster constantly talked about the benefits of Minnesota, that attitude change had as much to do with the recruiting turnaround as anything else. The new stadium helped, but a year ago it was just a hole in the ground. The crack helped with the Florida kids. The Twin Cities helped a lot too. I think he was fortunate to get some good weather on key recruiting weekends so the Texas kids who thought it was winter up here year round.

OTT: Finally, how exciting is it to have a new stadium in the wings when no one else in the conference can come close to claiming such a feat (renovations don't count, everyone else)?

TDG: I can't even tell you how excited I am for the new stadium. I would bet you anything there is more atmosphere and electricity at an Indiana or Northwestern home game than there is for any Gopher game in the Metrodome. Having a stadium on campus will be a blast and be something that an entire generation of Gopher fans has not been able to experience. It will quickly become one of the toughest tickets in town. Which says a lot when you factor in the Wild, Gopher hockey and the Vikings.

It will continue to help with recruiting but most importantly it will be like the athletic department has won the lottery with the revenue it will produce. In their current metrodome lease they get only a portion of concession revenue and zero suite revenue. Starting next year they will get more money per seat and 100% of the revenue from suites and concessions. This will go a long way for the entire athletic department.