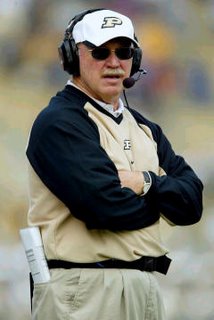 It appears that I or my colleagues over at Boiled Sports have raised the collective ire of coach Joe Tiller. I wanted to touch on this briefly before getting to the Northwestern preview, but the following article was brought to my attention when prowling the GBI boards today. The basis of it is the following quote:

"I think we could be 4-2," Purdue coach Joe Tiller said Tuesday. "I'm not sure, based on the team that we have right now, that we could be 6-0. I hesitate to say that because some blogger will say, well, he doesn't believe they can win, which indicates IQ to me, or lack thereof."

Against Oregon – Any number of plays could have changed the outcome. If Brandon King doesn’t get tackled from behind we go up 14-0 instead of 10-0 when we managed only a field goal. If we run out the clock at the end of the half we go in 20-3 instead of 20-6 after a bad interception led to an Oregon field goal. Either of these would have made Summers’ kick at the end moot. Then there is Summers’ kick and Painter not finding a wide open Sheets in the first overtime. This is easily in the four column of Joe’s 4-2.

Against Notre Dame – Mike Neal’s quote says it all:

"When you come out flat and you're not ready to play a football game and you look bored at halftime, what do you expect?" Neal said. "Then you have a lot of guys after you go through a first series like that, and they run the ball down your throat and you get to the sideline and look into everybody's faces, and they don't look interested in playing a football game. That has to be another part of why they continued to do it the whole third quarter."

You think some coaching, encouragement, hell, even some in-game adjustments might have made a difference? How about the fact that San Diego State, one of the worst teams in the country, had little trouble stopping the Notre Dame running game? If we can stop Beanie Wells like we did last week, we can stop Notre Dame. The defense quit, and that is the fault of the coaching staff.

Against Penn State – I’ll give this one to Joe, barely. The game plan against the Lions was pretty good. We slowed them down with a defense that looked much better a week later. Unfortunately, some poor execution on special teams and a bad snap at the worst time cost us a chance at a win. Give us a touchdown on that drive, a made field goal on the other miss, and a made extra point and we still lose, but we at least have a shot at the end.

Against Ohio State – Sorry, but I can’t help but feel we let one get away. The defense played out of its mind, but the offense was a huge disappointment. Coach Tiller has made the offense the focal point of his teams for his entire career. With the experience we had there is no excuse, no matter who we are playing, to get our only scoring from a school record long field goal. To me, if we hold a team to 20 points or less there is no reason we shouldn’t have a chance to win at the end. If the offense and the player we have at quarterback were as good as advertised in the preseason I certainly think we could have won the last two games.

I have been a Purdue fan for a very long time. I came to my first game in 1987 when I was just 8 years old. I had season tickets with my parents every year since then. I was in Pasadena on January 1, 2001, and I have traveled to see Purdue play ten different teams in six different states from Ohio to Hawaii. I know coach Tiller cares very much about whether this team wins or loses. I can’t help but see some of his quotes in recent years, however, and think that he has at least lost some, but not all of his passion. I have watched nearly every game of the Tiller era and it is clear to me that he is not the same coach as he was in 1997. That’s not a lack of IQ, that’s straight observation. I know many other fans like me would agree.

Coach Tiller famously came out and voiced his displeasure at having to go to Hawaii two years ago. My Boiled Sports buddies have even better quotes in their story linked above concerning old Joe vs. new Joe. The quote about effort is very telling. The effort wasn’t there at Notre Dame, and we lost by 17. We had a much better effort at Ohio State, and lost by 13. Apparently better effort is only worth four points. As long as that effort is there we’re much better, right?

I appreciate everything Joe has done for this program. This very site that I enjoy is a byproduct of that. It is safe to say that if it wasn’t for Joe Tiller, there would be very little of Purdue football for me to write about. I did expect better from his final season though. I expected him to go out guns blazing as we threw everything we had at a title in what he personally said was a season we were building to as a big one. Part of it is on poor execution by the players themselves in spots. Part of it has been on the coaching staff, of which he, as the head coach, is ultimately responsible.

I am not going to sweat this though. Part of being the media, whether he recognizes bloggers as part of the media or not (and that is a different argument for a different time) is that we ask questions and hold people accountable. Someone needs to be held accountable for what has happened on the field win or lose, and Tiller, again as head coach, is at the top of what currently is a long list.