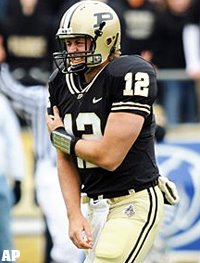 In my Know thy Team series from this summer I mentioned a very far-fetched scenario. On the quarterbacks’ entry, I mentioned how scout team quarterback Chris Bennett and incoming freshman Caleb TerBush would only see the field in an absolute disaster.

Both quarterbacks were warming up in the second quarter. When Justin Siller was hobbling around after getting knocked around all day one of them came close to actually going into the game. A position that has been this team’s strength in every season under Joe Tiller (save 2001) has been a glaring weakness all year. We have a 10,000 yard passer that is injured and has been benched for two different guys. The weakness of the position showed itself as we easily had our worst day throwing the ball since Jim Colletto roamed the sidelines. Being down to our third string quarterback, who was far from prepared after a questionable move to running back earlier, any kind of a passing game was eliminated. The offense did nothing, and another great effort by the defense was wasted.

I said it after the Notre Dame game, but this season is now over. It would take a four game winning streak just to get marginally bowl eligible now. Even if that miracle did happen there is no guarantee of a spot being open for us. We’re playing for pride now. We need to win the bucket back in the game’s final season and begin building for next year.

The defense – Basically, we win this game 6-3 if not for two huge plays that gave the Gophers nearly a third of their yards and set up both touchdowns. On the first, Weber made a great throw (aided by a missed blatant hold) and Brandon Green had a good run after the catch. The second was Weber making a back-breaking run that finished the game with a final touchdown. We had a couple of chances to get a stop on that drive and get the ball back only down four. Weber was the best offensive player on the field today.

The rest of the time Minnesota got nothing. Even the field goal was set up by a defensive play that gave them a short field. Eskridge was contained so much that we shockingly stopped a couple of running back screens. We held the Big Ten’s leading receiver to 50 yards below his season average. You can’t ask for more from this group, but they need offensive help. I still maintain that there is no reason we should lose any game that we hold a team to 20 points or fewer without it being the fault of the offense. Maybe Brock Spack deserves to stay a little longer after all.

Justin Siller – He is still very raw. He needs some coaching and he was holding on to the ball way too long any time he looked down field. Still, it was exciting to see he had an elusiveness we have sorely needed from the position. I don’t know how badly Painter was hurt, but when we needed to pass late he was probably the better option (if healthy). Earlier though Siller was moving the team until Minnesota adjusted. I was really hoping he would do some spread option stuff with Sheets and Bolden combined. That would have been fun. I think it would actually have been nice if he had stayed at QB this year and learned even mroe backing up Elliott next year. He is obviously the future, but we will have some growing pains and we may have to have him play through them.

Kory Sheets and Ralph Bolden – Sheets obviously played more than Bolden, but both did very well when they were in there. Credit should be given to the Minnesota defense. They knew we couldn’t pass the ball in the second half and adjusted accordingly. As a result, they met Sheets any time he had the ball. Still, Kory’s first fumble of the year came at the absolute wrong time.

Jeff Lindsay – Something needs to be said for the way he fought for that first down in the fourth quarter. It’s too bad we followed it with a missed field goal.

Playcalling -- Whether it was desperation or what, at least we got a little creative. The two fake handoffs and bomb to the end zone by Siller was a well run play. It was only off timing-wise from being a huge touchdown at a big moment. The Tardy throw was still in double coverage, but at least it was downfield.

Negatives from the Minnesota game:

Turnovers – We experienced a rarity in that Weber threw an interception, but our turnovers were far worse. The first interception was not Painter’s fault. Whitest had the first down but couldn’t corral the catch. It, along with both fumbles, came at the worst time. They only resulted in three points for the Gophers, but they all came as we were on good drives of our own. Unfortunately, this is just the mark of a bad football team. We hurt ourselves just when we’re beginning to do something good.

Preparation – It was obvious today that Siller has the tools to be a very good quarterback some day. This means he should never have been moved to running back. Ralph Bolden has emerged as a good player in that regard. Siller lost two months of preparation at the position, and struggled throwing the ball today. It’s almost like no one imagined he would actually have to play the position. He did very well running the ball, but once Minnesota played to stop the run he was ill-prepared to throw.

On a related note, how can we have unprepared backup QB's at a school known for the position?

The officials – It was obvious we didn’t have the A crew from the Big Ten. It wasn’t so much some missed calls, as only one in the aforementioned missed hold actually hurt. The officials never seemed to have control of what became a very feisty game. I am not one to call a team a "dirty team", but there were a few instances where Minnesota players went a little far today. The officials never seemed to discourage this and it felt like something was brewing the whole game.

Minnesota fans – I’ve been to several Minnesota-Purdue games in West Lafayette and even one in Minneapolis. From my experience, they have been some of the most cordial fans in the entire conference. Not today. There was one fan in particular that was in my section that was openly confrontational with the Purdue fans around him. At one point he actually was yelling for the Gophers to hit Painter in the arm again and knock him out of the game after he came back. This was absolutely uncalled for.

Purdue fans – Speaking of poor fans, we need to be held accountable for booing a hurt Minnesota player as he was hurt. We also had no need to boo Painter after he came back. I gained a new measure of respect Painter when he tried to fight through that injury. He deserved to be cheered for at least giving it a shot. I now have no question about his effort anymore.

Is this rock bottom? It’s the same story every week. We let a winnable game slip away because of our mistakes. For the third time in four weeks the defense played well enough to win, but we couldn’t even get across the 15 yard line, let alone score a touchdown. Now we are in dead last place in the Big Ten. We are the only team in the conference without a conference win and we face a game next week where the loser will be the first Big Ten team officially eliminated from postseason consideration.

I’m not quitting though. I said I would not quit believing we can do something until we’re mathematically eliminated. We can beat Michigan. The defense is good enough to limit Michigan State and Iowa, meaning we need to find some offense somehow. I still think we’ll win again Indiana too. It is highly improbable at this point, but I won’t give up.

We just need to concentrate on Michigan and Michigan alone this week. If we cannot beat the Wolverines this year we probably won’t be beating them for some time. All we need is one thing, one game to give us some positive momentum and we can start turning thing around. The seniors deserve better. Tiller himself deserves better. I keep hoping we’ll come out and play with some pride to get a win. That can happen this week.

Unfortunately, we’re just a bad, bad football team now. The in-game coaching wasn’t bad today, but injuries and general poor play cost us. It’s really a perfect storm of injuries, lack of talent, underperforming talent, and coaching at this point. We can overcome some of those for a time, but we haven’t overcome all of them except for maybe the first half of the Oregon game.

At least now we know that a loss next week means we can start building for next year. I already have in a way. I took advantage of the Follett’s 25% homecoming offer and purchased a Jaycen Taylor jersey because I knew it would get some good use next year. It joins my Kory Sheets and David Pender jerseys in the closet.

If this entry seems disjointed it is because I really don’t know what else I can say at this point. I find myself paying more attention to Miami since I am going down there for a game in two and a half weeks and preparing for basketball season. Since that officially starts Friday night it is appropriate that football’s hopes will likely officially end on Saturday.