Share All sharing options for: Blog takeover: Lake the Posts 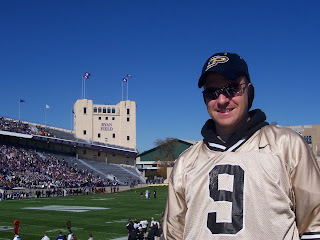 This is a first for the Big Ten season, but the noted Big Ten blog Lake the Posts contacted me this week with some questions about the Boilers this week, so I responded in turn with some of my own. Those answers should be up either late tonight or early tomorrow over at LTP. Since there appears to be no Big Ten bloggers' roundtable this week and I am covering a game on Friday night, we get an all Northwestern week.

Before we get to the questions though, I wanted to post an opportunity out there for you Boiler fans. Thanks to a little extra income at the moment, I was able to secure some Purdue basketball tickets for the coming season. Because of time and other constraints, I can't go to all of them. I basically did it so I could pick up the games I really wanted to go to (i.e. Duke, Indiana, etc.), and a couple of others. Essentially, I am making the majority of my seats available if anyone is interested. Since most of the season is going to be sold out I am listing them on Ebay, but I am not marking them up as much as other auctions I have seen. The following are the games I have listed. Each has a Buy It Now but the regular auctions start at 99 cents.

Eastern Michigan (NIT round one)

Ideally, I want to give these seats up to other Purdue fans, so if you contact me with a decent offer via e-mail I can take down the listing for that game and work something out. Based on what I paid for similar seats for the Northwestern game last year, the tickets have a face value of about $54 per pair per game. According to GBI, they are about 1,000 tickets from selling out the place for the entire season, so there won't be a ton available through Purdue.

I am keeping both Duke and Indiana, so don't ask (I have to have some perks, after all!). If you're interested in Wisconsin or Michigan State though I might be willing to work something out and just take down another game. Again, just feel free to e-mail me and we'll talk.

Off the Tracks: Northwestern has lived and died by the spread almost as much as Purdue has, but this year the defense seems to be setting the tone. How concerned are you that they struggled in their first big test of the season last week?

Lake the Posts: If you're implying the defense struggled then you may want to think again. The fact we gave up 37 points is really not a reflection of poor defense, but rather an absolute implosion by our special teams and several key turnovers in our end of the field. Consider this: here are the starting field positions for Michigan State's scoring drives with how they got there in parenthesis. The point is our "D" is legitimate, but our offense is sputtering to say the least. When you lose the field position battle this badly and 3-0 in turnover margin, you lose. Yes our scoring defense marks took a major hit, but this one is on everyone but the "D"

OTT: Do you see Purdue being able to slow down Tyrell Sutton ala Beanie Wells last week, or will he go Armando Allen on us.

LTP: Sutton got dinged in week 4 and sat the second half of the Ohio game. He is clearly not 100%, yet has played like a warrior. He has been a huge part of the offense as he is getting a lot of touches as a receiver, but obviously his rushing production is down. The O-line has been nothing short of phenomenal (our big question mark going into the season) in pass protection, but less then spectacular from an 'opening of holes for Sutton' standpoint. I'm expecting a big game from him, yet your rushing defense has been schizophrenic - either really on (see Ohio State) or really off (see Oregon) (ed. note: It wasn't bad in the first half against Oregon, the more telling is Notre Dame where we turned a team that couldn't gain 2 yards if they fell forward from the line of scrimmage into Navy). So I'm not sure.

OTT: Through six games against lesser competition you had to expect better numbers from Bacher? Do you view him as in a similar funk to Painter? Can he bust out Saturday?


LTP: Bacher has been an enigma, but the Wildcat fandom is starting to squeal about OC Mick McCall. McCall came from Bowling Green this year with all the hype about being a QB guy (Ed. Note: If he was there in 2003 we know all about him). Well, Bacher has gone from Jesse James to game manager, but the 30-yard passes across the field for 3 yard gains are starting to get old. Bacher still makes poor decisions, yet shows flashes of complete rhythm.

The offense has been an unequivocal disappointment to date. If not for the 180-turnaround by Mike Hankwitz with our "D", we'd be 3-3. I can't explain it. ESPN2 commentator Ray Bentley hit the nail on the head by analyzing the inability for us to throw 10+ yards which is essential to opening up our short slant and screen games. A funk, yes. Don't know if he'll snap out of it though.

OTT: Historically Tiller has done very well against Northwestern, with only the windy 2004 game and our own 2005 debacle as blemishes. What is your reasoning behind this?

LTP: Amazing isn't it? The only team we have a losing record against since 1995 in conference aside from the "big three" of Ohio State, Michigan and Penn State is Purdue. I can give you two reasons. Drew Brees and Vinny Sutherland. I still haven't recovered from the 99 yard game winning TD that year. (Ed. note: my sophomore year, what a play!)

OTT: Finally, how do you see Purdue's offense moving the ball against your defense after struggling the last two weeks?

I love our pass rush. We've racked up more sacks already then all of last year. I'm more concerned about Kory Sheets than the pass offense as we can tee-up on passing so it seems. Despite Painter's funk, he is an incredible talent, but amazingly we have confidence in our "D". Don't have confidence we won't mess up on special teams or turn it over, but feel pretty good about our "D".