Week 3 wrap and rankings of all sorts

Share All sharing options for: Week 3 wrap and rankings of all sorts 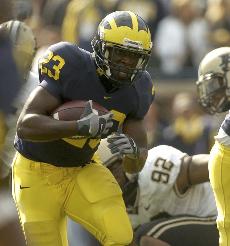 This was not a good week for the Big Ten. Only Wisconsin won a marquee matchup, gritting out a difficult road win at a very good Fresno State. Because of that they will take over the #1 spot in my Big Ten rankings. Everywhere else the Big Ten whiffed in chances to improve the image of the conference as a whole. Even in wins Big Ten teams didn’t impress. Illinois had no business playing that close of a game with Louisiana Lafayette. The same is true for Minnesota against Montana State.

Since we now have some respectable data, I can now recap this past week with a new series of rankings.

This is a provisional ranking for now, but the Big Ten’s only two loss team is actually quite lucky to have its one win. The Utah loss was understandable. Struggling against Miami of Ohio was rough, but still somewhat explainable. Saturday’s debacle in South Bend was simply inexcusable. Michigan kept handing Notre Dame great opportunity after great opportunity. The Irish did what Purdue was unable to do against Oregon and that is take advantage of them. If Michigan keeps doing this all year they won’t make it to any bowl game at all. As it stands now they must win at least four conference games to do so. With teams like Wisconsin, Penn State, Illinois, Ohio State, and Michigan State out there on the schedule it is looking bleak. Purdue, Northwestern, and even Minnesota are certainly capable of beating them too. Michigan will get better because they are Michigan. They have to get better quickly if they are going to do anything this year.

I know I am being overly hard on my own team here, but I don’t see any other team in the conference right now that would have blown a 17 point lead Saturday. Not only that, but the lead should have been a lot more. I am probably listening to the doomsayers too much, but when some odd coaching decisions continue to hamper this team from winning you have to wonder after awhile if that is truly an issue. It seems like we always do the exact opposite of what we should do. The running game was working well Saturday but the passing game was not, so we kept trying (and failing a lot) to pass. We needed to use the clock with the lead, so we ran a no huddle. We needed to kill off less than two minutes before halftime to hold a 3 possession lead, so we passed until we threw an interception and gave up three points. We needed half a yard on a day we were getting almost five per carry, so we punt and it turns into a game-changing return. We were kicking well from the left hash all day, and it is easier for a right footed kicker to kick from there. We also had plenty of time to get a closer kick in a tricky wind. Instead, we don’t attempt to get closer in a swirling wind and add a degree of difficulty by going to the right hash for the game-winner in regulation. You’re going to have one or two bad decisions in every game, but that many?

Oregon gave us every chance to win this game. Even considering the mistakes were about even on both sides we still outplayed them for most of the game. We are at a huge crossroads right now. Central Michigan is an absolute must win. They are a team that can easily beat us if we’re not focused on them. If they do so it means another long losing streak too. Even then, I’ll say Notre Dame is an absolute must win as well because a loss means a 2-4 first half most likely. I’ll believe again if we come out and stomp Central Michigan again like we did in the regular season game last season. If not, we’re in serious trouble.

I still believe in this team. I think we showed we’re better and can play with anyone by taking a team to double overtime that was supposed to blow us out. We showed enough positives in the first half to show me that things are fixable. The running game was very strong. The defense made some very big plays. Justin Siller can be incredibly elusive with the ball in his hands. That’s what makes it worse because so much of that went away after the first quarter. It’s like we got scared with the lead. It should never have gone to double overtime. If anything, we had a chance to blow them out but could never deliver the critical blow. Shoot, even Jim Colletto managed a blowout of highly ranked California. I was at that game and this one was a lot like it without the key turn that made it a blowout. Sadly, that has been our M.O. for way too many years.

On a brighter note, I do want to thank all the Oregon fans for stopping by last week. You’re among the most courteous visitors to this site, especially en masse. Saturday’s fans at the game were just as nice. I hope they enjoyed their visit to West Lafayette. I’m looking forward to the rematch next year when I visit Autzen.

I’m sure Gopher fans are ecstatic to be 3-0 after last season, but another effort like that against a decent Florida Atlantic team this week will result in 3-1. 12 point wins over 1-AA squads are hardly the stuff to get excited about, but Minnesota needs to be an exception after last year. Things are at least going in the right direction. The Gophers are good enough to pull an upset somewhere along the way in Big Ten play, but they may miss Duane Bennett more than they think. If they get past the Owls this week they are a legitimate bowl team on numbers alone.

Illinois right now reminds me a lot of our team in 2002. They have the talent and ability to play with anyone in the country, but they are more than capable of playing down to the level of their competition. This was evidenced Saturday by the Illini needing a late field goal to seal a win over a mediocre Sun Belt team at home. That factor is what is going to make Illinois one of the most difficult teams to call in the conference simply because they can win or lose any given week. I can see them knocking off Ohio State again or losing to Minnesota.

The Hoosiers should actually get tested this week as Ball State is 3-0 and is receiving votes in both polls. The Cardinals have never beaten a BCS conference foe, but this is a golden opportunity for them. I think we need to officially place both Indiana Big Ten schools on MAC upset watch this week. The MAC usually gets one game a year, but it has yet to happen after a couple of close calls in 2008.

If history is destined to repeat itself the Wildcats will lose this week. It has been decades since the Wildcats have had a perfect non-conference record. Only one game stands in the way, and that is Saturday against the Ohio Bobcats. That’s right, the same Ohio Bobcats who probably should have beaten Ohio State. If Northwestern rides Tyrell Sutton this week that streak will finally be over and the Wildcats can think about bowl positioning instead of a mere bid. It took a little while to get going, but Northwestern predictably dominated a weaker foe. That’s all you can ask.

The Hawkeyes have made the biggest jump since the preseason. Thanks to Shonn Green in the backfield and the play of Ricky Stanzi they have moved past several underwhelming teams. It is the rare year where missing Michigan is actually a little disappointing instead of being a bonus to the schedule. A pretty tough test at Pittsburgh looms this week, but a win (coupled with wins by Minnesota and Northwestern) could insure that the Big Ten bowl picture will be very crowded for a second straight year. Yet another reason why Purdue’s loss Saturday hurts even more.

I think this is the point where we currently have some clear separation from the rest of the league. Javon Ringer has been nothing short of impressive so far, giving the Spartans a dominant aspect that few other teams have. Penn State’s overall team play (especially the offense), Wisconsin’s closer’s mentality, and Ohio State’s overall talent mean these four, as of right now, are head and shoulders about the other seven teams at least in my eyes. Michigan State may even have an advantage since Wisconsin and Ohio State must travel to East Lansing.

For the second week in a row the offense was terrible. With the talent that coach Tressell has amassed there is absolutely no excuse for that. Losing at USC is understandable. Getting blown out is not. Where on earth was the vaunted defense? One player cannot possibly make that much of a difference on a team this talented. Not only that, there are open quarterback questions now. Michigan and Purdue made the Big Ten look bad this weekend, Ohio State only complicated matters.

Penn State hasn’t truly played anyone yet, but in that they haven’t allowed an opponent to have even a glimmer of a chance. They may be the only team in the conference that has played 12 complete quarters so far. They won’t be tested again this week when they host Temple. Of the 3-0 teams against varying opponents of difficulty Penn State has been the most impressive by far. I expect them to be 5-0 when they come to Ross-Ade for our next chance at a ranked opponent. I also expect to be 0 for our last 16 against ranked opponents once it is over.

This was a typical Wisconsin win on Saturday night as the Badgers did just enough without screwing things up. It was also impressive in that they took the best shot from a very good team in its home stadium. That lesson will come in handy later on. Because Ohio State and Penn state come to Madison I can see Wisconsin’s most difficult remaining game coming at Michigan State. For the conference’s sake we could benefit from someone else getting a chance in the spotlight other than the Buckeyes.

There weren’t a ton of changes this week as there is still not a ton of data to evaluate teams on. It seems more like I am eliminating ranked teams each week rather than finding new ones to rank. I am finding it harder and harder to do the last five, especially when teams like UCLA, who looked good early, get blasted two weeks later. I would have put Purdue at #25 this week if we could have stopped the game at halftime, but it wasn’t mean to be. I won’t even consider us again unless we win the next three.