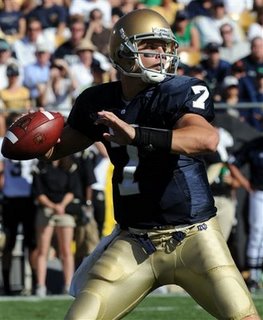 It’s not even over as I write this, but this is the most embarrassing loss under Joe Tiller. The statistics tell the story.

Notre Dame came in as one of the worst rushing teams in the nation again, not even averaging 80 yards per game. We gave up 201 yards, including 134 to Armando Allen.

Jimmy Clausen had a career best 275 yards and three touchdowns. He had two picks in each game so far. We didn’t get a pick, and rarely got defensive pressure. I’ll give credit where credit is due. Jimmy Montana played a great game, but our defense showed no interest whatsoever in wanting to play the third quarter.

Notre Dame was susceptible to the run. After Kory Sheets’ early touchdown run we completely went away from the running game. Once down 14 points, we went back to it for a few plays and Kory gashed them. It seems to me that is this is working,a nd has for four games now, we might want to go to it again.

Kickoff returns were a strength. On most returns it was a comedy of errors.

We couldn’t afford empty trips into the red zone like two years ago. We missed a short field goal and went for it late when we probably shouldn’t have. Three points there might have at least given us a small chance. Notre Dame Answered with a three point drive of its own and it was over.

The one play I alluded to in the preview happened. Painter’s ugly pick six undid a lot of good for the senior quarterback. We were leading 7-0 at that point. We had missed a field goal, but survived an ND miss to even things out. The pick tied it, but after coming back down to retake the lead we were outscored 31-7 the rest of the way. We only slowed down the Irish when the game was well in hand at the end.

Brock Spack needs to be fired. Don’t even wait to get back to West Lafayette, just fire him in the post game press conference. The offense once again played well enough to win. His defense, however, continued its maddening tendency to not make adjustments or exploit weaknesses. It’s like he felt we didn’t need to play run defense because they were so bad. Why not play overwhelming run defense and force Clausen to throw 60 times per game? The game has passed Spack by. If he will not make any in game adjustments or even try make other teams adjust to his defenses it is time for him to go.

This season is now for all intents and purposes, over. We will not beat Penn State. We will not beat Ohio State. In two weeks, we will be 2-4 needing to go 5-1 in the second half just to assure a bowl game. That will not happen. Michigan will run wild on us after shocking Wisconsin today. Tyrell Sutton will gash us because we won’t adjust to Northwestern’s running game. Javon Ringer could possibly break LaDanian Tomlinson’s single game rushing record against us. That is 406 yards for those of you scoring at home. Even Indiana will run for over 200 yards.

It is not even the fact that we lost to Notre Dame. I can accept that as the Irish played a nearly perfect game offensively. It is the method in which it happened. There is absolutely no excuse for things that have been glaring weaknesses for at least 15 consecutive games to become overwhelming strengths. More examples:

We knew Notre Dame was vulnerable against the run. We ran 17 times and passed 55 times. That was with the game being within reach for the majority of time. It’s not like we fell behind early and had to pass, pass, pass to catch up. Kory Sheets ran for almost 7 yards a carry, yet he only rushed the ball 13 times and less than 10 in the first half when we led most of the way? WTF?

It led to only three points, but we got absolutely hosed on a play that even the receiver didn’t think he came up with the catch. At that point there was still the smallest of chances. A stop there meant it was a two possession game. With the way the offense was moving we still had time for two scores. The catch let Notre Dame get enough for a field goal, and it was game over from there.

The fact the Irish even made a field goal is the final insult. It was Notre Dame’s first made field goal of the year.

Now, matters are worse. We lost one of best defensive players in Frank Duong to a knee injury that certainly did not sound good. We also may have lost Kory Sheets for awhile too. When he went off the field late in the game favoring his shoulder it looked like he could be out for an extensive amount of time.

Sheets, Tardy, and Painter (if you take away the interception) played very well. Painter was spreading the ball around as he should. Sheets was elusive when we gave him the ball (which wasn’t enough) and Tardy was fantastic after the catch. Those are the only positive from this game.

Still, this coaching staff needs a drastic attitude adjustment. The "good" rushing team should never have 17 attempts when the "abysmal" rushing team has 40. That is what happened today. That lies strictly on the shoulders of the coaching staff. It is like they are trying to force Painter’s Heisman candidacy and record breaking attempts instead of doing what will help this team win football games. Against Oregon we ran a freaking no-huddle instead of running clock with the lead against a ranked team. These coaching decisions aren’t even questionable anymore. They are downright absurd.

Barring a drastic turnaround defensively, this season is all but over. We cannot stop even the worst rushing teams from running the ball down our throats. We are not generating a pass rush even against a team that doesn’t have a strong offensive line. We should be absolutely embarrassed with our second half effort this week after being able to play good second halves in all three games before this. We succeeded only in making Jimmy Clausen looks like Joe Montana and Armando Allen look like Marcus Allen.

We might find two or three wins the rest of the way, but five in order to assure a bowl game? I don’t think so.