Q&A with Rakes of Mallow

Share All sharing options for: Q&A with Rakes of Mallow 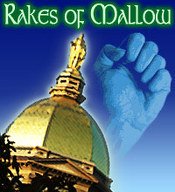 I wanted to thank everyone that has stopped by the last couple of days and offered their condolences. It has been a whirlwind since yesterday, and will continue to be until the funeral on Monday. I have a few things that were already pre made to post over the next few days in order to break up the monotony

The first such thing is a question and answer session that I had with the Notre Dame blog Rake of Mallow over at SB Nation. My answers can be found over here at this link:

Off the Tracks: Notre Dame's defense didn't help the offense at times last year. How much improvement have you seen on this side of the ball? Have you been concerned by the absolute lack of a pass rush?

Rakes of Mallow: This defense is pretty young and rather thin along the defensive line, but I think they've been playing well. The safety tandem of David Bruton and Kyle McCarthy has been fantastic, both nearly averaging double digits in tackles, and Brian Smith is emerging as a leader at linebacker. The corner depth is really strong, although relatively untested against the run-heavy attacks of Michigan and Michigan State.

You pointed out the lack of pressure, and yes, that's a cause for concern. The biggest weakness on the defense is negligible depth, and that means the Irish have to blitz to get pressure. While we all have faith that Coach Tenuta's blitzes will eventually begin hitting, they're just not getting there yet. I'd like to think they'll have success against Purdue Saturday, but there is no way to tell.

OTT: How has Notre Dame's running game struggled so much with such talented backs? Is it a result of the line or underperforming ballcarriers?

ROM: I would put it more on the line than the ballcarriers. Armando Allen seems to have difficulty finding space at times and James Aldridge has been dinged up since he started getting serious time, but Robert Hughes has had some solid production in his limited career. The line still doesn't have a lot of starting experience outside of right tackle Sam Young, and whether its scheme, play-calling or talent, the running game just hasn't gotten it done since 2006.

OTT: Where do you think Jimmy Clausen is in his development so far? Is he ahead of or behind Quinn?

ROM: Quinn and Clausen both were thrown into the fire their freshman year and performed admirably under adverse circumstances, but at this point, I'd give the nod to Clausen. To be fair, Quinn's sophomore year passing options under Ty Willingham were limited to "Bomb it deep to Matt Shelton" or "Throw a bubble screen to Rhema McKnight." Say what you will about Coach Weis, but he knows his quarterbacks, and the level Quinn reached his final two seasons in South Bend is something Clausen can only aspire to reach. There is enough talent at wide receiver (Tate, Floyd, Kamara), that Clausen could approach all of Quinn's records if he can get an offensive line in front of him comparable to what Our Fair Brady was working with, but he has to keep improving.

OTT: What do you think is the biggest reason Purdue has struggled to close out Notre Dame in South bend under coach Tiller? Is it simple "Luck of the Irish?"

ROM: I really have no idea, because Notre Dame Stadium has been anything but a house of horrors for most Irish opponents (Michigan won in '06, USC the last three trips, Michigan State never loses there). I guess just plain bad luck, plus catching some of the better Irish teams there (the'98 Gator Bowl team, '00 Fiesta Bowl team,'02 Gator Bowl team, '06 Sugar Bowl team) and hosted the atrocities in 2003 and 2007.

Finally, in an effort to pay some bills this week, it is important to remember that the Purdue-Notre Dame game is one for the Shillelagh trophy. If you're in need of your own trophy, feel free to visit the following sites: