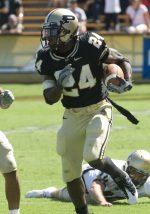 Vanilla is often used to describe sporting events where teams play things very simply. If that is the case, then today was vanilla ice cream topped with vanilla sauce, served by Vanilla Ice himself. As I was driving home from West Lafayette late this afternoon I was trying to sort out my feelings for the game. It wasn’t as big of a blowout as I expected, but it was still a blowout. We struggled offensively, but we really didn’t show a lot of creativity. Defensively, we continued our maddening tendency to simply refuse to cover a hot receiver, (Ryan Chesla in this case) but only surrendered 10 points thanks to a fluke play and a drive surrendered when the game was well in hand.

Of course, as I write this Lou Holtz is using the "holding back for Michigan" excuse as the reason Notre Dame struggled with San Diego State. I do think we held back a lot with Oregon coming to town, but I also think Northern Colorado played a lot better than I expected. Both contributed to a blowout that was simply not as big as expected.

When I viewed this game on the schedule I had visions of our players running up and down the field, gaining huge chunks of yardage and scoring on big play after big play. This vision was born of the total ineptitude that I viewed Northern Colorado’s football program as having. They were certainly a lot better than I expected. Bear fans can expect more than one win this season from what I saw today.

In the end, Purdue did not play its best, but they also held back quite a bit. I feel much better than I did after the 60-35 win over Indiana State two years ago, but we must improve if we’re going to have a good season.

Postives from the Northern Colorado game:

Frank Duong – Frank has earned his place on the field. It is clear he plays kamikaze-style football. He flies around with reckless abandon, just wanting to hit someone. Today he saw quite a bit of action for the first time, and did very well. He was in on a ton of plays, had a few big hits, and generally made his presence felt. While it was clear he was overmatched a few times, I can see him turning into a Jake Standeford-type of asset at safety.

Keith Smith – It was clear today that Smith’s physical presence will be a nice plus in the passing game. He just looked better than Dorien Bryant in the slot because of his size. Smith led us in catches, found the end zone with his first career reception, and looked very comfortable at the position. As he continues to develop into a quality option we will get better.

Desmond Tardy – Tardy technically didn’t start, but he had several big plays. It’s not his fault we didn’t score off of his first big catch and run. His second set up a touchdown while his big kickoff return set up another score. All told he gave us 180 all-purpose yards, and had three plays that he threatened to take it all the way. He’ll be a huge factor in the return game as the season goes on.

Special Teams – These guys were phenomenal today. Only some confusion on the opening kickoff and a fluke play on a punt in the fourth quarter were blemishes. I don’t even blame them for the punt miscue. When you play a team with deficiencies like Northern Colorado, punts are always an adventure because the punter normally drops the ball right into the middle of the crowd instead of kicking past it. That makes what happened much more likely, and we were simply unlucky.

Obviously a blocked punt returned for a TD (by Mike Conway in what will likely be his only career TD), two near kickoff TD’s, and a couple of touchbacks from a true freshman kicker are huge positives. It looks like Special Teams will be a major advantage that we must exploit. Chris Summers also boomed a couple of big punts.

I feel especially good for Mike Conway, a walk-on who will always remember what may be his one big play. I probably spend way too much time paying attention to Purdue football and I didn’t even know the kid before today. You could tell with his lunge that no silly punter was denying him his touchdown.

The running game – When we did use it, we tore through Northern Colorado as expected. Kory Sheets had a modest 81 yard, 2 TD day. Frank Halliburton was a big plus on special teams (and is quite the dancer as we saw during SHOUT). Justin Siller also looked pretty good the first time we saw him with the ball in his hands. I’d still like to see Painter run more, as we’re better when he is a threat. Even Kyle Orton ran quite a bit as a senior.

The defense – Were they really that bad? Again, we didn’t show much. They still nearly pitched a shutout. Most of Northern Colorado’s yards came on the late touchdown drive and the missed field goal drive. It was frustrating to see Ryan Chesla look like Antonio Gates, but he didn’t cause too much damage. There were no huge plays like against Indiana State two years ago. Brian Waggener isn’t exactly a stiff if he was recruited by Florida, and he showed he could play a bit today.

Negatives from the Northern Colorado game:

Finishing drives – Against the rest of our schedule we are not going to go for it on fourth and five inside the 10. It should have never gotten to that point anyway. It seemed like any time we needed to run and assert dominance we tried to pass and it was met with miserable results. The passing game wasn’t sharp. I understand the need for balance and to work on the passing game, but today there were moments (like at the end of the first half) where we needed to just run the ball. Going for it there was a calculated risk that didn’t work out. Leaving three points on the field wouldn’t hurt us, and we won’t alter on.

Penalties – I’ll attribute this to being the first game, but we had a lot of uncharacteristic penalties. Some of the penalties were the result of horrible calls though. The most notable was the pass interference called by the back judge 25 yards from the play. The officials missed a couple of other penalties that Northern Colorado committed quite obviously. This was a minor problem.

The Ryan Chesla factor – As usual, we had one receiver that we refused to cover even though it was obvious he was the other team’s only receiving threat. Today it was tight end Ryan Chesla. He’s good, but not 9 catches for 99 yards good.

Using other receivers – Painter had a bad game. He was overthrowing guys and our receivers were dropping passes. For the number of options we allegedly have, only four guys caught passes. We didn’t have a lot out of anyone not named Orton, Smith, or Tardy and we need more. Again, this could be the result of holding back a lot offensively.

Curtis Painter – Statistically 286 yards and two scores is good, but it could have been much better. Painter overthrew a number of guys, especially in the red zone. He also had two sure interceptions dropped by inept defensive backs. He can make those mistakes against Northern Colorado, but Oregon’s secondary is one of the best in the nation. They would have eaten him alive today. He will need to play MUCH better next week. The Bears defensive line got way too much pressure as well. Oregon will certainly bring more.

It wasn’t what I expected, but it wasn’t as bad as we think. It’s not like two years ago when Indiana State, a team worse than the Bears, hung 35 points on us with a number of big plays. The special teams were fantastic. The defense was better than it has been, and the offense showed enough to know they can be better. The game was a blowout, just not as big of a blowout as many of us were expecting.

I think also that a lot of our problems were first game rust. When you’re playing that many receivers for the first time there are bound to be some problems. The guys worked hard though. Many of the drops were because Painter simply didn’t throw the ball well. His first pass to Tardy down the left sideline was beautiful. He tapered off after that.

Another important factor is that we allowed Northern Colorado to have the ball for almost two thirds of the game. Despite that, we scored 42 points and they only had 10. Any team is going to get 300 yards of offense if they have the ball for 37 minutes.

That said, we have to get better this week. Oregon annihilated Utah State as expected today, and with Washington’s close loss to #15 BYU their win over the Huskies looks more impressive. We played well against the run, but we will need to be even better at it against the Ducks. They threw down 408 yards rushing today. We’ll need to at least slow that down and make them throw to have a chance.

This is a huge week for the 2008 Purdue football season. Oregon is beatable. In my opinion, a win means as much as a 10 win season. A loss means that we still cannot compete with ranked teams and we will struggle to make a bowl.

Utah State wasn’t going to do much, and Washington was about the same. Painter cannot continue to overthrow receivers. We have to get a better pass rush and learn to wrap guys up. This was a good game for showing what we need to do. The lesson must now be applied. The real season begins in seven days.

I didn’t touch on this, but I think it is because it was pretty much a foregone conclusion. With today’s win coach Tiller tied Jack Mollenkopf at 84 atop the list for wins as a Purdue head coach. Joe has been under a lot of criticism lately. His regime feels like it could have been more, but the fact we are even where we are is a credit to him.

Before Joe came to town we had been to five bowl games period. Joe has taken us to ten so far. We hadn’t even smelled a winning record, let alone a bowl game, in 13 years before he came. He immediately made us a regular in the postseason. He also made us a legitimate threat in the Big Ten each week instead of an automatic win for opposing teams. We aren’t where we want to be, but it is because of Joe Tiller that we are even within sight of it.

Joe has done more for Purdue football than anyone else since Mollenkopf left. It is, therefore, fitting that he tied Jack today. Yes we could have been more. Yes we still can be more. We have still come farther than anyone could have dreamed 12 years ago. This is a tremendous honor for coach Tiller, and this Boilermaker thanks him from the bottom of his heart.