Share All sharing options for: Cleaning out today's inbox 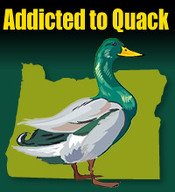 This is a quickie entry before I go to cover Zionsville and Hamilton Southeastern as part of my newspaper job tonight. First, we have noted Pac-10 blog Addicted to quack for a late-week Q&A session. My answers can be found over at his site as we get ready for tomorrow’s game with the Ducks. Special thanks to Dave for taking part in this.

Off the Tracks: What are your thoughts on why the Oregon offense is running so smoothly despite the replacements that have been made? Is it a testament to the talent Oregon has, or the lack of talent in the competition?

Addicted to Quack: Both. Lets be honest here, Washington and Utah State are terrible. But we've still rolled up 110 points in two games, with the most yards of anyone in the country. You don't do that, even against bad team, unless you're pretty good. We've replaced Dixon and Stewart with quality players, and have already shown the depth to overcome injuries (QB Justin Roper was knocked out of the first game with a concussion, and his backup threw two TD passes, RB Jeremiah Johnson knocked out after the first play of the second game with a separated shoulder, LeGarrette Blount rushed for over 100 yards and two touchdowns). Plus, we are absolutely loaded on both lines. We don't get the sheer numbers of talent like a USC does, but, despite the criticism, the uniforms and tricked out facilities are clearly working.

OTT: What is your opinion on speed since it is one of Oregon's strengths? Is there really that much of a discrepancy between the Big Ten and Pac-10 (or SEC for that matter)?

ATQ: We're decently fast. Not USC fast, but we play faster than we do because the no huddle keeps winded defenders on the field. Its tough to compare things like speed in conferences. I do think that the Big Ten is in a bit of a down cycle right now. We saw last year in the Michigan game that they were totally outclassed by the Ducks in the speed department. We've seen Ohio State, fastest team in the Big Ten, exposed in the national championship game. I'd definitely say that the Pac-10, and certainly the SEC, are faster than the Big Ten right now. But that kind of thing can change in a hurry.

OTT: Talk about Oregon's defense for the moment. They seem to go against the Pac-10 'no defense' belief. How will they respond when test really for the first time this year?

ATQ: First off, the Pac-10 'no defense' belief has always been completely unwarranted. If you look at the NFL, there are as many Pac-10 defensive players as there are from any other conference. Its just that because we traditionally throw the ball so much, we still see a lot of high scores. As for the defense, almost everyone of significant is back from last year. Because they have so much experience (experience in which they were totally badass), I think we can expect more of the same. And the strength of the unit is the secondary. They won't be surprised by anything in the spread (they're good, and practice against it everyday).

OTT: Who wins the battle between Oregon's great secondary and Purdue quarterback Curtis Painter on Saturday.

ATQ: Painter's good, but he has a history of struggling against marquee opponents. That said, so did Nate Longshore of Cal, and he was the only QB who really beat our secondary last year. Our secondary, though, is just really good. That said, Painter can improve his chances dramatically if he can get out of the pocket a little bit and use his legs as weapons. (Ed note: as I have been preaching all week) That will open up the receivers some. If he just stays in the pocket and tries to pitch and catch, he's done.

OTT: What is with Eugene, Oregon and the human Anterior Cruciate Ligament? Is it the worst place on earth for this body part? After the number of ACL tears Oregon has had it has to be.

ATQ: I have no idea, but I'm firmly convinced it cost us a national championship last year. The number of starters (QB, 2 WRs, and a LB), plus important backups (RB Johnson) going out with ACLs was ridiculous, then we have our starting QB this year blow a knee in the fall camp. Is it the spread? The turf? The water? We have no idea, but its really starting to piss us off. Maybe's its God's revenge for the uniforms?

Thanks again Dave. I’m looking forward to visiting Autzen for the return trip next year. Today’s second part comes from reader Tim Carey at Bleacher Report. Tim offers some much need advice for Purdue fans tomorrow, whether you’re headed to Ross-Ade or no. I suggest we take it, as it is the best I have heard all week. I am tired of hearing about reasons we will lose, how about we go out and win the damn game! Here is what Tim has to say:

Can fans make the difference in a football game? You'd better believe it. As a longtime reader and rare poster, I'm sick and tired of reading every excuse known to man for why Purdue is going to lose to the Oregon Ducks tomorrow.

So what if they're fast? Do you really buy into the Big Ten being the slowest conference in the country? I don't.

So what if we haven't beaten a ranked team in way too long? Doesn't that mean we're due?

So what if we're not picked to finish in the top half of the Big Ten this year? That didn't stop us from having a great year in 1997. And being picked to win the national title in 2005 (stupid Orlando newspaper) didn't help us go to a bowl game.

To every diehard Boilermaker within driving range of Ross-Ade Stadium...let's do something about it. I don't know about you, but my weekend will be a lot happier with a big serving of BOILED DUCK. Let's rally together and make Saturday a special day that will go down in Boiler/Tiller history with Notre Dame '97, Kansas State '98, Michigan '00, and every other huge win that lives in our memories later. COME TO THE FOOTBALL GAME. WEAR BLACK. BE LOUD. PULL AN UPSET.

Quit worrying about if it's going to rain or not...it's just water.

Don't complain about whether or not the game sells out...just make sure YOU buy YOUR tickets.
Don't be the last person to stand up on the Ducks' 3rd and 2...be the first one.

Don't be the last person to yell on a kickoff...be the first one.

Don't be the quietest wettest crowd in Ross-Ade Stadium history...be the loudest one.

We're waiting on that signature win...some of you say we've been waiting way too long. Let's do our part to go and get it.

Make our own magic.

Need to get fired up? Go watch some Spoilermaker clips...check out the Rose Bowl celebration on Purduebands.com...rewind that Alamo Bowl classic on BTN one more time. Whether there's 40,000 or 50,000 or 60,000 in the stands tomorrow, let's be an insanely loud Boilermaker faithful.

Time for some duck hunting.

As Corey Taylor of Slipknot says in the song Pulse of the Maggots: