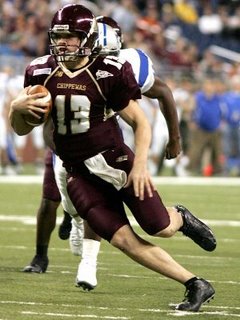 Before getting into the Central Michigan preview, I'm still looking for a student who would be willing to take advantage of the University Bookstore Special for me on Monday so I can get a new jersey. Also, I still have an extra ticket for Saturday's game thanks to my old roommate. If interested, please e-mail me.

We've been here before. Playing a team for a 3rd time in 14 games is often a rarity reserved for the SEC or other conferences with a championship game. Sadly, since many are projecting us for the Motor City Bowl (if we qualify for a bowl at all) we may get a fourth game against these guys. Frankly, I could do without that. This was originally supposed to be the week we played Oregon. Because of last year's Motor City Bowl the teams agreed to flip-flop spots in the schedule, but I would have preferred the original incarnation. While we're at it, I would have rather opened with someone else on the opening weekend and left this spot open, then reschedule the game somewhere down the line.

But we're here playing the Chips again. That is what we have been assigned and if we want to have any postseason expectations we must beat them for the third time in a year. Central Michigan is more than capable of beating us. A loss likely means a long losing streak that would put us at 1-5 midway through the season.

This is the reason the Chippewas have a chance to win on Saturday. As we learned in the Motor City Bowl, they have a powerful offense that moves the ball well. They can score points in bunches. Their weakness comes against teams outside the MAC. In the MAC, Central Michigan has been dominant with a 16-2 record the past two plus seasons. Outside the MAC is a different story, as they are just 4-9. The four wins have come against Temple, Eastern Illinois, Middle Tennessee State, and Army while the losses have ranged from Georgia to North Dakota State. This season is more of the same, as they opened with a 31-12 win over Eastern Illinois before losing 56-17 at Georgia. Last week Central opened MAC play with a 31-28 win over Ohio.

It is no surprise that Central Michigan's offensive attack revolves around quarterback Dan LeFevour. The junior struggled in the first half of both games against us a year ago, but had a great second half in each. If we are to win again we must do this for a third time and building another big lead early. So far on the year LeFevour is 72 of 116 for 828 yards and five scores against just one interception. Those are pretty good numbers, especially considering that he has played one of the best teams in the country in Georgia. His rushing numbers aren't as gaudy as last year's yet with only 106 yards and one touchdown, but that does not mean he isn't dangerous. He had over 650 yards passing and 6 touchdown passes in both games against us combined. He also rushed for more than 100 and two more scores in the bowl game. All told he finished with 1,100 yards rushing a year ago, while we have not had a 1,000 rusher since Joey Harris in 2002.

Central Michigan returns many of the other weapons that make LeFevour so dangerous. Ontario Sneed leads the team in rushing with 110 yards and three touchdowns. The Chippewas will need to do better than their 100 yards per game average as a team on the ground. Since they trailed from the start of the Georgia game they did have to pass a lot, and they had 59 yards rushing as a team. As far as the running game goes, we simply need to contain LeFevour and we should be fine.

Receivers Antonio Brown and Brian Anderson ran circles around us in Detroit, and we get to see them again. Both have combined for 34 catches, 380 yards, and a touchdown so far. Sneed has also been very effective catching passes out of the backfield with 10 catches for 98 yards. Jean Pitts (11-153-2) and Joe Bockheim (7-87-1) have been the other two top targets for LeFevour. He has been spreading around the ball more evenly this season. Still, he is a threat to tuck and run on every pass play. LeFevour seems to have more developed passing options than Painter at this point, so our improved secondary must be ready.

All that said, I was impressed by the play of our defense last week. Even in surrendering over 500 yards, it played well enough to win. It held numerous times in the red zone, making the Ducks settle for field goals. It also forced numerous turnovers and held a speedy team to less than 200 yards passing. Central Michigan lacks the team speed or running game that Oregon has. If we are motivated, I am confident that we can stop them. That is the key factor. If this Purdue team goes out and plays like last week never happened we can still have a good if not great season. We must continue to swarm to the ball. If we come out moping and let Central Michigan move at will like in the second half of the bowl game last year, consider this season over.

This is the reason that Purdue has a great chance to win on Saturday. In three games against Minnesota during his career Drew Brees lit up the Gophers each time on his way to setting a number of Big Ten career marks. If Curtis Painter breaks some of those records he owes a big thank you to the Central Michigan defense. Simply put, they cannot stop us. In two games last year Painter was 64 of 93 for 906 yards and six touchdowns. Considering we stepped off the throttle when we got up 38-0 in the first half of the regular season game a year ago, it could have been worse. When forced to move the ball an entire game in the Motor City Bowl Painter only broke Brees' school and Big Ten single game passing record with 546 yards. Even that could have been worse if for not two drops that turned into interceptions.

As evidenced last week, those drops could be a problem. Also, the biggest drop occurred on a play that shouldn't have been thrown to that receiver. On the critical third down play in the second overtime we had an incompletion, but Kory Sheets was so wide open on the other side of the field calling for the ball he could have walked in for the score. As long as Painter doesn't force his throws, and he didn't in the bowl game a year ago, we should be fine. We're averaging more than 50 points per game in the four contests against the Chippewas.

The defense this year is not appreciably better. They are giving up 32 points per game and almost 300 yards through the air. Ohio and Eastern Illinois are far from Texas Tech and Hawaii as far as passing offenses go. Despite that, Central Michigan ranks 109th out of 119 teams in total defense. The rushing defense is not much better as Heisman hopeful Knowshon Moreno gashed them for 168 yards and three scores.

Nick Bellore is the Chips' leading tackler on the season with 31, but this defense has given up 12 touchdowns in its past two games. Frank Zombo is also a threat to get to the quarterback with 2.5 sacks on the season. Still, they tackled us quite a few times in both games a year ago. That didn't stop the 96 reasons we won both times. We probably won't even need to throw that much if Kory Sheets continues to run as well as he has. Sheets has a goal of a 1,000 yard and breaking the school touchdown record. While he won't get the 739 yards he needs for 1,000 in this game, he'll likely put a healthy dent in it. There is a very good chance he'll get the two scores he needs to pass Mike Alstott.

Andrew Aguila has been perfect kicking the ball so far. He's 10 of 10 on extra points and has hit all three field goal attempts. He made a pair of field goals against us in Detroit a year ago. The more interesting story will be how Chris Summers recovers from last week. The two misses he had were not easy kicks, and Purdue didn't help him by getting into better position. Still, he did miss a game-winner. My inside sources tell me he ahs already gotten over it, and it was hardly the only reason we lost that game.

One area we have to be ready for is the punting game. It's not that Central Michigan booms 50-yarders all the time. Actually, it is the opposite. Brett Hartmann is only averaging 35 yards per kick. Because of that, the danger of another short kick bouncing off the leg of a gunner downfield is always there. Our own punt coverage must also clearly be better. Brown showed his speed last year and actually took one back 75 yards against Ohio.

Unless we have a severe letdown I like our chances in this one. The defense looks to be much improved considering that many of the yards it gave up last week did not result in points. The speed discrepancy isn't there this week. We also contained a running quarterback well. I like when Painter wasn't afraid to tuck and run a week ago. The offense moved well when he did, but once we went away from it we bogged down. The more that Curtis does that the more dangerous we will be. We showed we can move the ball just fine on the ground against a good team. We must not go away from this element.

This game should be a good opportunity to work on a passing game that has been less than sharp so far. Drops and missed receivers were huge last week. Those must be worked on if we're to have any kind of success this year. After Central Michigan we face a critical three game stretch against Notre Dame, Penn State, and Ohio State. In my opinion, we have to get one of those games to play in the postseason, and two if we want to go to a good bowl. Getting two is possible, but it begins this week.

Our rushing defense ranks 106th in the nation at the moment, but so far Central Michigan has not been a good running team. A big reason that our average is so high is because we have only played two games and one was against possibly the best rushing team in the country. If we can contain LeFevour, this number should improve dramatically. A good start defensively will be critical in this. We must contain LeFevour early and move the ball at will. We built a big lead both times last year, and both times Central Michigan played a better second half. We must build a big lead again and weather any storm the Chips bring late, because they won't quit.

What it comes down to is attitude. If Purdue plays like it did in the first quarter last week we can play with any team in the country. That means a blowout in our favor. If we revert to our old form Central Michigan is easily good enough to beat us.