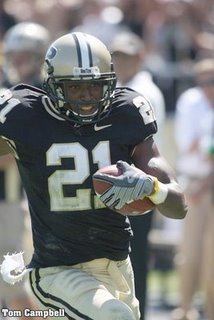 This week was a very good week for the Big Ten. If you picked a Big Ten team to win, you were right. Sure, a number of teams didn’t exactly impress much in said wins, but each team is now assured of not having a winless season. Because I picked Minnesota to lose I lost my perfect record in the Big Ten Bloggers’ pick ‘em contest, but I am still comfortably in first place.

This was also a good weekend to check out the rest of Purdue’s competition. All three of our remaining non-conference opponents were in action. I’ll talk about them a bit after I work my way through the conference. Also, while I’ll be posting this week’s blogpoll ballot for critique, the power rankings will be officially on hold until the week before the conference season starts. This allows me to get a better handle on all 11 teams since people like Indiana, Purdue, and Iowa haven’t really played anyone yet.

Minnesota 42, Bowling Green 17 – I wanted to start with the Gophers because they had probably the most impressive week of anyone based solely on their expectations coming in. I picked them to lose because of how well both teams performed in week 1. Instead, the Gophers thumped a team in their house that had beaten them in Minneapolis a year before. If Minnesota can get past Florida Atlantic at home, another team that beat them a year ago, they will likely have a 4-0 non-conference record. That makes them a bowl threat with just a couple of conference wins. Next up is a perceived layup against Montana State.

Penn State 45, Oregon State – The injuries on the defensive side of the ball are not slowing them down so far. The Nittany Lions dominated at home for the second straight week, all but assuring their own 4-0 non-conference record. Oregon State was supposed to be a sleeper team in the Pac-10. They need to wake up. Evan Royster, with 141 yards and three touchdowns, is beginning to look like a pretty good back for the Lions. This will most likely be our most difficult home conference game. Penn State now has one of the easiest BCS opponents in all the land with a trip to Syracuse.

Wisconsin 51, Marshall 14 – They kept showing this one on the scoreboard and it looked like Marshall was going to put quite a scare into the Badgers. The Wisconsin ran off an astounding 51 unanswered points. Akron had a similar fate last week with a fast start before Wisconsin dominated the second half. It certainly looks like if the Badgers are going to lose a team will have to put them away early. In the second half of both games they have outscored opponents 55-7. They may be the best closing team in the conference right now. A little bit of everyone is contributing, but it will be interesting to see how they handle a tricky trip to Fresno State.

Iowa 42, Florida International 0 – The Hawkeyes got another big win with a dual–headed monster at quarterback, but both must be viewed with the competition in perspective. Maine is terrible and FIU might be even worse. Things get much tougher this week with their annual struggle with Iowa State before a trip to Pittsburgh. Until I see how Iowa performs in both I have to give them a grade of incomplete. They have taken a step forward in a sense that the offense is running smoothly against inferior opponents. That wasn’t the case a season ago.

Indiana 45, Murray State 3 – The Hoosiers are 2-0 for the fifth straight season. They have never been able to boast such a streak, though the most difficult opponent they have faced in these ten games is the same Oregon team we face this week. They also have to be pleased that they received production from the ground game other than Kellen Lewis. There is little question that the Hoosiers are much better than in the past. They are annihilating teams they should annihilate. Next up is a bye before a home game against a pretty good Ball State team that knows it can compete with the Hoosiers. The Cardinals have never beaten a BCS conference foe, but have come close several times lately.

Illinois 47, Eastern Illinois 21 – I loved the throwback uniforms that the Illini wore on Saturday. They re-dedicated Memorial Stadium after the renovations were complete in style with a big win. I sure hope they took care of the concourse size and restroom problems, as it was the worst of the seven Big Ten stadiums I have visited. While this was never in doubt, the Illini have to be concerned about their defense. Giving up a ton of points to Missouri is one thing, but 21 points to a 1-AA team we shut down last year? They can do better.

Michigan State 42, Eastern Michigan 10 – I said that Michigan State needed to work on its running game and defense in last week’s preview. Please place a checkmark next to both. Javon Ringer is already in midseason form with more than 200 yards and seven touchdowns on the year. If he keeps up those numbers Michigan State will have a very successful season. A Florida Atlantic team that can throw a bit is next and should provide another good test for the defense before Jimmy Montana comes to town.

Purdue 42, Northern Colorado 10 – It was far from an unmitigated disaster, but the Boilers still showed a lot of room for improvement. After had a fairly healthy camp we ended up missing 40% of our offensive line and maybe our best linebacker were hurt. Three key defensive players sat out with suspensions that were expected to play. Brian Waggener showed why he was a Florida recruit too. Just because he transferred doesn’t mean he can’t play ball. All of those players should be back against the Ducks, and I have a suspicion that, at least as far as the injuries go, they were held out as a precaution. Purdue also maintains an incomplete grade.

Northwestern 24, Duke 20 – Much was made about how Northwestern almost lost to Duke again. The Blue Devils had a game-winning touchdown called back on a penalty and gained nearly 500 yards in the loss. The most important figure is still the score. Northwestern is not going to play for the national championship. Their goal is a bowl game and the fact they won places them a step closer to that goal. Facing Ohio this week suddenly looks a lot tougher after the Bobcats went into the ‘shoe and fought the Buckeyes hard.

Michigan 16, Miami (OH) 6 – I’ve received a lot of comments about being an anti-Michigan blog lately. I do not hate Michigan. Far from it, in fact. I respect the Wolverines as one of the greatest college programs in the nation. Unlike other great programs of the past, Michigan is still relevant to the modern college football world. All I have done is raise some honest questions instead of bowing in awe before this mystical force that is the Rich Rodriguez spread offense. So far, those questions have not been answered. The Wolverines struggled again this week, but still got the W. They will get better each week, but until that offense can really get going even bad teams will have a shot at them.

That being said, I will definitely be a Michigan fan this week.

Ohio State 26, Ohio 14 – The Buckeyes are way too talented for one player to make that much of a difference. Unless they were holding back a lot in Milton Berle fashion the Buckeyes must play a whole lot better against USC. I don’t even think it was so much a case of Ohio State winning the game as Ohio losing it. In the future, I think Ohio state should make any game with an in-state opponent (since they haven’t lost such a game since 1921) be a game for the THE in THE Ohio State University. Can we make this happen?

Notre Dame 21, San Diego State 13 – I think I will leave most of the scathing rhetoric on the Irish to my friend J Money over at Boiled Sports. San Diego State was mere inches (and some would say they got those inches) from putting this game away at 20-7 with a fourth quarter touchdown. I’ll give the Irish credit for maintaining their composure to come back and win this, but they still struggled against a team that got dominated by a 1-AA team just a week ago. What’s going to happen when they face a good defense or a good offense that can take advantage of all those mistakes? They could change my mind by beating Michigan this week (who has a much better defense), but as of right now I don’t think Notre Dame is much better. CFN and ESPN have to be smoking a big fat bag of crack if they think Notre Dame is worthy of a New Year’s Day Bowl on anything but name recognition alone.

Oregon 66, Utah State 24 – The Aggies are one of the worst 1-A teams in the country, but good criminy the Ducks looked good in smoking them. The running game had over 400 yards and seven touchdowns. Instead of one guy in Johnathan Stewart we get to stop two great backs in Jeremiah Johnson and LaGarrette Blount. Oregon now has the best offense in the country yardage –wise.

To have any chance at winning this week we have to slow down their running game, not bite on their fakes, and make them throw the ball. We will get multiple looks at both running back and quarterback, meaning we have to be totally alert defensively. I have a bad feeling about this now.

Georgia 56, Central Michigan 17 – Had the Chips played a better game in Athens I would be very concerned. Central Michigan continued its regular season tendency of getting blown up by non-MAC teams, however. This is still a dangerous game in two weeks and must be treated as a must win game. Assuming a loss to Oregon (which is looking more and more likely) we cannot afford to lose a game to them.

There are not a ton of changes this week as there weren’t many upsets outside of East Carolina over West Virginia. Though the Hurricanes fell at Florida Saturday night, I was impressed that they played a very good game for three quarters before running out of gas. They didn’t roll over and die like they did so many times last year, sot hey are turning a corner. Feel free to discuss the poll here before I finalize the ballot late tomorrow night.

Also, there will be dual roundtables on Wednesday before a Thursday Oregon preview and Friday Big Ten preview. Somewhere in there I may be interacting with the Oregon blog Addicted to Quack once again.