Share All sharing options for: Big rankings for week 4 (plus blogpoll ballot) 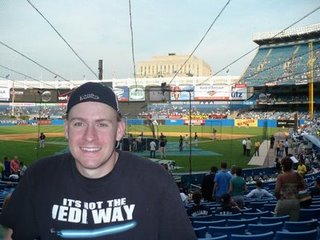 Before we begin this wrap I wanted to touch on the events of yesterday evening. Last night was the final game in Yankee Stadium. I have never been a fan of the Yankees. I was raised a Cubs fan and I will die a Cubs fan (making this year a rare happy year in baseball). Still, I have a sense of history. I had a chance to attend a game at Yankee Stadium last summer. I knew I was going to be in on the day of a Yankee game so I got tickets in advance. It was the only day I have ever been in . I went strictly as a sports fan visiting one of the great cathedrals of sport. I consider my single visit to be one of the jewels in my crown of sports attendance. It was only a meaningless July game against the blue Jays, but to stand in the same house where so much history was made was almost overwhelming.

It is a shame that we live in an age where money is more important than tradition. The single class basketball tournament, the Miami Orange Bowl, and now Yankee Stadium are all on that list of proud traditions that were lost, but did not need to be lost. I consider myself fortunate to have seen all three. Yankee Stadium, you will be missed. The only way baseball could be sadder is if Fenway and Wrigley (two other parks I have been fortunate enough to visit) go by the wayside as well.

11. (11) (1-2) Results: bye – The Wolverines had a bye this week, so there’s not really much else that needs to be said. Opening the season with the new prohibitive favorite in the conference won’t help matters much. can do wonders for its season by beating this week. The Badgers simply want to get past one of their most difficult road games.

I don’t think the Wolverines will stay down here for long. The long bowl streak is likely to end this season as everyone lines up to take their shots, but they will get better. Just how much better remains to be seen.

10. (7) Indiana (2-1) Result: Ball State 42, Indiana 20– The Dante Love injury last night was absolutely hideous. The news that he is moving again and seems to be recovering after a five hour surgery is incredibly encouraging. That is easily the biggest story from IU’s loss last night. It wasn’t even the only life-threatening injury on the night, as ’s Brouce Mompremier had another very serious looking injury last night as well.

is very good this year. They may have the best team they have ever had. Their streak against BCS conference teams is now over and I suspected it would happen. I just never expected it would happen in such dominating fashion. The Cardinals completely shut down a very good offense in the second half. Now the Hoosiers had better hope they win five conference games to assure a bowl bid, because a later game against is far from a guarantee.

9. (10) Purdue (2-1) Result: Purdue 32, 25 – Most people thought Purdue would be 2-1 at this point regardless of what happened. The truth is that Purdue should be 3-0 right now if Curtis Painter had played up to his hype. If Painter ever starts playing to the massive expectations played on his shoulders Purdue has shown that they will be a difficult out every week. As I write this, I am watching the replay of yesterday’s game on the Big Ten network. They were talking about how we had nothing on the ground. Well, we had nothing on the ground because we didn’t go to the strength of the team (at this time, the running game) in Kory Sheets enough.

And what is wrong with that? The running game has been great when we have used it at this point. Why not commit to it and run until teams force us to throw? I know I am nothing more than a blogger instead of a head coach, but why not completely shift the perception of the team just to shock people for a few games? That’s a wild and crazy idea, considering everyone expects us to pass until Painter’s arm falls off. It would never work.

Seriously though, I am encouraged by much of our defense. Unfortunately, through three games opposing offenses have exploited the weakness of that unit. The front four has performed well, even generating great pressure yesterday. The secondary has been great with four picks in the last two games, three for absolutely huge plays. Opposing offenses have been attacking our linebackers at will. Heygood is good, but he has been on a bit of an island so far. If Werner gets backs they should be better, but if I were an opposing offense I would continue to do exactly what Northern Colorado, , and have done. Memo to Notre Dame: run the halfback screen all day and Clausen will break records.

Do you get paid to make your stupid predictions? I have seen some talking heads in my lifetime who thought they were so-called experts, but you really take the cake.

You are not even close. What a joke.

Okay, I predicted to lose, and they did lose. I am not exactly trailing the Big Ten bloggers’ pick ‘em standings by that much. So please, inform me what you are basing the accusation on?

Seriously though, needed a win yesterday against their first real opponent and they did not get it. Therefore, I have to continue reserving judgment on the Hawkeyes. Opening Big Ten play at home against Northwestern, who finally broke through and beat all of its non-conference opponents, will be a good gauge for both.

7. (6) Northwestern (4-0) Result: Northwestern 16, 8– Speaking of the Wildcats, they deserve congratulations for surviving C.J. Bacher on Saturday. The Wildcats tried their best to get their annual head-scratcher of a non-conference loss, but pulled it out in the end thanks to the defense. Bacher threw four interceptions, but the defense managed to block a pair of field goal attempts and kept the Bobcats from turning that generosity into a flood of points. If Bacher plays better, Northwestern will definitely go bowling somewhere. Northwestern is 4-0 for the first time in 46 years.

6. (9) (4-0) Result: 37, Atlantic 3 – is an odd team so far. In their non-conference games that I expected them to sail through they struggled. In the two that I expected trouble, they won with ease. A 37-3 win over Florida Atlantic is nothing to be ashamed of, especially since the same team hung 42 on their defense a year ago. Tim Brewster’s bunch can now legitimately dream of the postseason with just a pair of conference wins. That’s quite a step forward from a year ago.

Unfortunately, as the close wins over Northern Illinois and Montana State have shown, the defense still has a tendency to go south at times. That will likely make for a very up and down Big Ten campaign.

5. (8) (2-1) Result: bye – No game for the Illini last week, which is probably a good thing after the close call against Louisiana-Lafayette. They don’t draw an easy assignment by opening conference play at . The Nittany Lions also have revenge on their minds after losing in last year. I admit I haven’t followed the Illini much this season since Purdue hasn’t played them in two years. I’m going to try and follow this week’s game at a little more, especially since we get next.

4. (3) (3-1) Result: 28, 10 – I’m dropping the Buckeyes again because the game was probably a little too close for too long. may be feeling feisty enough to make a game of it this week, but I doubt it. More than Beanie Wells, this team feels like something is just off at the moment. Switching from Boeckman to Pryor appears to have helped, but that was against . is better than , and could potentially pull an upset if the Buckeye aren’t careful.

3. (4) (3-1) Result: 23, Notre Dame 7 – Thank you, Spartans, for preventing the return to glory. Now just please make sure you run Javon Ringer as much as you have so he is exhausted by the time we play you. Seriously, Ringer is playing like the Big Ten player of the year so far. I might even say he is making a mild case for the Heisman. It’s unfortunate that the loss to happened, because the longer that stayed undefeated the better his chances were. The Spartans will have to balance their offense more in case teams either figure out how to stop Ringer or he gets hurt.

Notre Dame was also in position near the end to win when I didn’t expect them to. This makes me very nervous heading into Saturday.

2. (2) (4-0) Result: Penn State 45, 3 – Penn State has been the most dominant team in the conference so far. They have yet to be tested by any of their opponents. Sure they haven’t played anyone of note, but it has to be encouraging that hasn’t even remotely played down to their level of competition. Now they face a pretty good team. If they win that one in dominating fashion we can seriously consider Penn state for even more than the Big Ten championship.

1. (1) (3-0) Result: bye – stays at the top because they have the most impressive win to date. They also get the first crack at in conference play. There is no true advantage coming into this week’s game because both had a bye before facing each other. As well as ’s defense has played in the second half of its games may be lucky to see the other side of the 50 after halftime. October 11th may be the best game this season in the conference when comes to .

I didn’t have many changes at the top this week. I couldn’t even punish that much because of who they lost to. Most of the changes are at the bottom. I had to give Ball state some love after Saturday night’s game. The Cardinals are definitely for real and the game at should be fantastic. I was also impressed enough by stomping Texas A&M at that I let them back into the poll. If continues to improve like they are I expect the Canes to stay for most of the season. I may even be attending the November 13th game against Virginia Tech down in . Here is the rest of the poll, feel free to comment or gripe in the comments section.