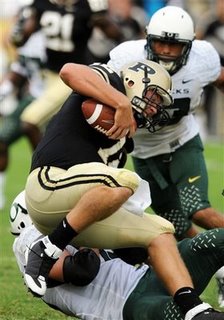 Purdue had one play that would have won the game. We didn’t convert.

Oregon had one play to win the game. It converted.

The perception out there already is that this was a sloppy game. The only reason we were in it was because Oregon had five turnovers. We were given tons of chances tow in and couldn’t pull it off. CFN’s instant analysis even said this was a game no one wanted to win.

The first half was the best half of football Purdue has played in years. We came out and punched a better team in the mouth. We were in full control of the game for the half. Oregon is a very, very good team, and for 29 minutes we outplayed them in every aspect. Joe was being inventive in playcalling, we were winning the battle on the lines, and our defense was playing out of its mind.

I say 29 minutes, however, because in that final minute we made a huge mistake. The one time we needed Tiller to go conservative on his playcalling and simply run out the clock we got greedy. Painter made a dumb throw and gave Oregon the ball back in field goal range. We held them to that field goal, but those three points were huge. They made a three possession game a two possession game at the break. That meant that one freak play could potentially cut that lead in half.

That one play, ironically, came when we were conservative and should have been aggressive. With the way we were running the ball a half yard would have been an easy gain. A simple Painter sneak would have gotten it done. That would have kept a potential scoring drive alive at a point where another score might have ended it. Instead, we punted on fourth and very short near midfield with a two touchdown lead and immediately gave up a punt return for a touchdown.

I’ll give Oregon a ton of credit. While we made them pay for their mistakes early on, they made us pay even more for ours. Even in the end things were almost even there. The points off of turnovers were dead even. Oregon gained a hundred more yards, but it didn’t really seem like that much since our defense was making them earn nearly every yard. Oregon never gave up, fought back, and walked out with a win because we made one more mistake than them.

Again, we didn’t take advantage of one play to win the game and they did.

Right now I feel sick. I haven’t walked out of a Purdue game numb and speechless like this since the 2005 Minnesota game in the Metrodome. I was spent on the drive home today. I had nothing left after doing what little I could to win this game. It feels exactly like 2002 when we had a number of games in the bag, but one little thing prevented it from going home. We could have regained so much respect with just one more play today, but instead it will just look like Oregon escaped a poor performance on the road. There will be no memory of just how hard we made a very good Duck team work for it. I think we earned the respect of a number of Duck fans, as well as any college football fan that watched this game.

Positives from the Oregon game:

Kory Sheets – This was, quite simply, his best game as a Boilermaker. Two touchdowns, 180 yards rushing, and it probably could have been more. Our running game was so dominant today that we should have kept running until they stopped us. With a first and goal from the 10 in the first overtime all we needed to do was ram the ball down their throats. We gained more than four yards per carry on these guys. That means three plays and we would have been with a win. Most importantly, Kory held on to the ball.

Playcalling, first half edition – I thought at first Tiller woke up and thought it was 1997 again. We were under center and running up the middle. We weren’t trying to run out of the shotgun. Curtis Painter actually tucked the ball and ran a few times in the right spots. Justin Siller had a fantastic play to set up the second Sheets touchdown. Oregon looked confused and we made them pay for every mistake. All was well until the interception before the half. That was the play that changed the game.

Brandon King – Another huge play was when he read Roper’s pass perfectly. That was a critical point in the game. If Oregon scores a touchdown there they take the lead and probably run away with the game. King’s pick was huge and nearly put it in our favor. Special credit needs to be given to the guy that ran him down though. Since we only got a field goal after the play, it saved four points.

Chris Summers – I know he missed two big kicks, but it is amazing he hit the four he did hit with the way the wind was swirling. I don’t know if someone got a hand on the potential game winner at the end of regulation, but he kept us in the game and at least gave us a chance to win. Our fumble in the second OT made sure his final kick was much more difficult, but he didn’t miss by much. He also had some very good pints.

The defense – Has a team ever given up 500 yards and looked good on defense? I think Purdue did today. We answered every challenge with their speed. We made sure this did not become a blowout. Even in that, we forced five turnovers and made several big stops that ended drives or held the Ducks to field goals. Unfortunately, those field goals won it in the end. They were 5 of 18 on third downs and 1 of 4 on fourth downs. We also held them to about a 40% completion rate when they were averaging about 60%.

Frank Duong – What else can you say about this kid. With his effort and heart, he is the Jaycen Taylor of the defense. His attitude needs to be spread around the entire team. I thought he was done when he was carted off, but he came back and was in it at the end.

The crowd -- The crowd did a great job of staying in the game and keeping the team up today. Even the club section was up and going today. Oregon brought a very good crowd as well, and from what I saw they were some of the nicest visiting fans I have ever seen at Purdue. In the end, everyone was treated to a really, really good game.

Negatives from the Oregon game:

Playcalling, second half edition – Again, we were conservative at times we needed to be aggressive and vice versa. When we needed to run more and melt the clock, we passed even though the run was working well. We easily could have taken the final two minutes of the first half away by running, but the pick gave them three points. If we run in the first overtime from the ten, we win.

Curtis Painter – He didn’t lose the game for us, but he didn’t win it either. He played better than he ahs in past big games, but he needs to do better if we’re going to pull one of these out. If he was as good as some have talked him up to be we would have won today. He is almost there, but not quite. I liked the touch he put on the ball that ended up being his second interception, but that was the wrong time for that touch. That play works when the defense (and especially the safety) commits to the blitz and we are able to get a guy behind him. A great example is the Illinois game from 2004 when Orton hit Brandon Jones and Taylor Stubblefield each for a TD on throws like that.

The killer instinct – I knew at halftime we could have dug an even deeper hole for them, but we weren’t able to do it. We let them hang around, and Oregon took advantage. We didn’t even need to play a perfect game as we saw. Instead, the little things killed us again. Special Teams was a strength last week, but this week we give up a punt return TD and miss two field goals. We had a chance to step on their throats and we didn’t do it.

I have no idea where we go from here. Today showed we are more than capable of winning a game against a good team. We haven’t even shown that much in the last three seasons. Still, we have to take that next step and do it.

First, we must avoid a very dangerous game against Central Michigan. This has to be a win next week at any cost. Second, we must take advantage of our next chance to win a big game in two weeks at Notre Dame. Even then, no one in the Big Ten looks overwhelmingly good at the moment. There is absolutely no reason we cannot win the rest of our home games, though Penn State will be the most difficult of those five.

I’m not a player on this team. I never have been, nor will I be. We now have two choices. We can learn and correct the little things that prevented us from winning today, or we can fold like we did in 2005. I feel exactly like I did at that moment walking out of the Metrodome. Should we crap the bed at home next week another 6 game losing streak is entirely possible. If we learn from this and play like we showed we can today at times, a 6 game winning streak is possible.