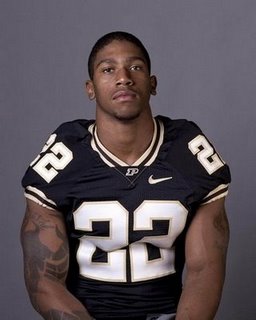 Training camp for Purdue ended this past weekend. Coach Tiller seems to be very happy with the final incarnation he will lead in West Lafayette. Fans like me are just anxious to get the season going. Unless you have NCAA ’09 and can change the schedule, however, we have to wait another week while everyone else starts this Saturday. This may be a blessing as we have three tricky games before we even get into the conference, but in reality I think everyone would rather have us play this week and take a week off elsewhere.

Training camp was what training camp always is for us. There are plusses and minuses. There are injuries as well as the emergence of new stars. There are academic casualties and freshmen who surprisingly put themselves in a position to make a contribution. Chris Carlino is the hottest news this week, but he just as likely could end up redshirting the year as much as starting. Overall I think it was a very good training game from the news I have been able to gather, but things obviously could have been better.

Dwight McLean – I saw this guy’s picture through Purdue’s site the other day and my reaction was, "Holy crap, that dude is ripped!" McLean seems to have come out of nowhere to grab one of the starting safety positions, allowing us to move Brandon King back to his natural position of cornerback. McLean comes off like a guy that is driven to prove people wrong. He barely got recruited after getting hurt in high school, and we had to fight off football power New Mexico State to get him well after signing day. The fact he displaced to other guys in Torri Williams, Josh McKinley, and Brandon King who have experience for us at his position gives me hope. He’s a very hard worker and likely won’t be shying away from contact. That’s what we have needed in a safety for a long time.

Even the secondary as a whole has been a big plus. David Pender is a bit banged up, but should be ready to go. King moving over to corner gives us four young corners with playing experience in Pender, King, Royce Adams, and Charlton Williams. McLean coming on takes the pressure off of Torri Williams and Josh McKinley. The best news is that everyone will be back next year if Torri Williams stays healthy, stays out of trouble, and gets a 6th year back because of all the injuries he has had. All of them but McLean played last year, so we can do more in the secondary to help out the run defense.

Chris Carlino – He’s undersized and it scares the crap out of me playing an undersized true freshman at middle linebacker in the Big Ten, but I am encouraged that he has come on enough to at least provide some depth at a much-needed position. It is disappointing at the same time to see guys like Kevin Green and DeVarro Greaves haven’t developed enough already being here to solidly beat him out for the job. If Carlino is the best man for it, I say have at it.

Defensive Line – The GBI Football yearbook both praised and ripped out defensive line throughout. They complimented numerous times about how deep it would be, yet said that our run defense would be suspect. I think things will change drastically with Magee moving to defensive end. We finally have the big monster at defensive end most teams that are good against the run have.

Kris Cooke appears to be ready to contribute enough that we could move Magee. The same can be said for Mike Neal. Ryan Kerrigan is coming on at the other end position, and Magee’s move lets Keyon Brown, Nickaro Golding, and Gerald Gooden develop at a slower pace. I’ve even heard Nick Mondek mentioned as being played some in the rotation. That’s ten guys we can rotate among four positions. I think we’re going to be much better against the run than people realize because of this depth.

As long as everyone stays healthy, I feel safe with 10 of our 11 starters. Only the middle linebacker position gives me concerns among the current projected starters. The best part is that Only Anthony Heygood, Alex Magee, and Ryan Baker will be gone next year from this group. Magee and Baker have depth behind them, while Heygood doesn’t quite yet. I believe the defense will be markedly better this season than in past years based on experience alone. These guys often had to play before they were ready the last two years. Now they have experience and we can simply do more as far as blitzes and coverages go. How is this a bad thing?

Keith Smith and Aaron Valentin – We needed two receivers to emerge, and it appears we have found two. Valentin has been making a number of highlight reel catches in practice. Smith was said to be the second best receiver in camp behind Greg Orton. Since Orton had a pretty good camp as well, that’s a very good sign. Others like Desmond Tardy, Joe Whitest, Byron Williams, and others will surely play and get plenty of balls thrown their way, but we needed two guys to become starters. It is also nice that Valentin and Smith will return next year like so many others.

Tiller mentioned recently how there won’t be as many big plays, but is that really a bad thing? So what if we dink and dunk our way down the field. As long as we don’t turn it over we take time off the clock. At that point it becomes a very simple equation: the other team can’t score if it doesn’t have the ball. I think the big play will be there if we need it, but I very much welcome longer drives as long as they end in points.

Caleb TerBush – Rumor has it the kid can play a bit. Some say that it was his play in training camp that moved Siller to running back. This is pretty good for a very lightly regarded kid from Central Illinois. We still won’t see him on the field until next season at the earliest barring a disaster, but I am a big fan of developing quarterbacks so they are ready to take the field. Very rarely do you get a guy that is ready to go from day one.

Jaycen Taylor’s injury – This is obviously the worst thing that has come out of training camp. We lose starter-caliber player before a down is even played, and he happens to be one of the team’s best energy guys. Not only that, it prompted a move of the quarterback of the future to running back. That move has seen mixed reviews at best, but we’ll see what happens.

I am glad that Jaycen seems committed to returning for 2009. His return then will be very important as Joey Elliott becomes a first-time starter. It also helps that he will be a presence at practice and on the sidelines. His loss to the offense is still big. Dierking and Halliburton will likely get more carries, but for now it is the Kory Sheets show.

Desmond Tardy – I had really hoped he would seize the opportunity and become an offensive anchor. He appears ready to do so in the return game, but after being a projected starter for so long he is still on the second string. I am sure he will play, but I expected more out of him than I have heard. Of course, Valentin and Smith may have simply played that much better.

Kevin Green – Green is another guy, like Tardy, that hasn’t fully taken control of a position that was all but promised to him. I think with Werner and Heygood on the outside we’ll be able to do more defensively than people think, but Green, or whoever ends up in the middle, needs to contribute too. There was some depth that developed, especially with Joe Holland moving over, but it is still a major position of need. The Dwayne Beckford loss has also already been discussed at length.

Now that camp is over I have a really good feeling about the coming season. We may have caught a break when it came out that Oregon quarterback Nick Costa will miss most of the season after re-injuring his knee, but the Ducks are still a very good team. I maintain that this game is the key to the season. A win would make things a lot brighter as far as the rest of the season is concerned. A loss would continue the questions of if we can beat a good team. That makes it even better that they are our first real test.

I think the offense will be fine. Painter will get the ball to his receivers, and we’ll find some guys that can consistently catch the ball. The defense will be much improved. It will be better than everyone thinks, too. The position switches, Siller aside, are all logical and even expected. They will make the team better both now and in the future. Many of the new players in starting roles like Cory Benton and Jason Werner have adjusted well and will quickly become strengths.

This team is ready. The only major negative is the Taylor injury, which can be overcome. The table is set to surprise in the Big Ten. Now we merely must go out and do it.