Share All sharing options for: Know thy Team 2008: Wide Receivers and Tight Ends 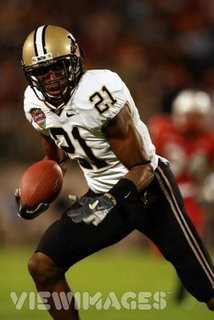 The next unit preview is one that will likely decide the season. Our offensive line has some questions, but as long as everyone is healthy we have the makings of a solid unit. New O-line coach Danny Hope also built the line that protected Drew Brees and sent all five players to the NFL, so we’re in good hands there. The easy pun here would be to say that we need those good hands to be with the wide receivers, so I won’t avoid it.

Curtis Painter has proven he can get them the ball. He competed more than 62% of his passes last season and that was with Dorien Bryant dropping (or deflecting into interceptions) a bunch of easy passes. What we need is for people to catch the ball when it gets there. If we can find a couple of guys to do that with consistency we will be just fine. If not, expect a losing season.

It is no secret that Purdue is missing four of its top five pass catchers from a year ago. Dorien Bryant graduated. Dustin Keller is soon to be the starting tight end for the defending champion of the National Freeball League, the New Orleans Looters. Jake Standeford needs to return as a graduate assistant to teach dedication, route-running, and heart. Selwyn Lymon should consider himself lucky he is in the Miami Dolphins camp and not jail. That leaves Orton with 67 catches for 752 yards and 3 scores as our top guy coming back. #2 on that list is running back Kory Sheets (30-216-2). No one else had more than 11 catches last year. In fact, everyone returning has fewer career receptions combined than Orton except for Sheets. Career-wise Orton has been steady. He only had 9 catches for 94 yards as a freshman, but his sophomore season was arguably his best with a 58-790-5 line. All told, he has 134 receptions for 1,636 yards and eight scores. Those aren’t career numbers, but they are very solid.

Needless to say, we need Greg Orton to be a leader. When he was recruited a few years ago, Purdue fans were dreaming of 2008 as the season that he and Lymon would dominate defenses as the most highly touted receivers Purdue had ever gathered. Purdue generally has three types of receivers in its usual package: slot, possession, and main/deep. Orton has been pretty versatile as a possession guy, but now he will be the main guy. He has more size than past main guys like Vnny Sutherland and Chris Daniels, and possibly better physical tools than a John Standeford. Like all three in their final seasons in West Lafayette, I expect him to blossom into a solid #1. If the other guys develop like they are capable and Painter spreads the ball around, we won’t need an 80-1,000-10 season from Orton to have a good year. If they develop well and he still gets those numbers, we will be doing very well and Painter could win a Heisman.

It should also be noted that Orton is one of the few players that actually showed up in the 2006 Champs Sports Bowl against Maryland, as well as last season against Ohio State.

The above three appear to be poised to fill the remaining three spots when we run four receiver sets. They also only have 17 catches for 181 yards and a touchdown in their career. All of those belong to Tardy, as he has been the understudy to Dorien Bryant for the past two seasons.

Since Tardy is the most experienced of this lot by default we’ll discuss him first. Last season he had 10 catches for 93 yards, but that was mostly because he was behind Bryant all year in the slot. Tardy missed the spring due to shoulder surgery, but he is mobile as a former high school option-style quarterback. As a result, he knows what to do when he gets the ball in the open field. Having him on the field opens the door for trick plays as well. Tardy has one pass attempt in each of the past three seasons, and even threw for a touchdown at Hawaii in 2006 (his 2005 one was called back on a penalty). The only times he has personally visited the end zone came last season when he returned the opening kickoff for a touchdown at Minnesota and against Indiana State in 2006. Tardy is an interesting study. Playing in the slot and returning kicks means he will be a bit of a jack of all trades. He can pass and will likely have a few rushing attempts as well. The question is can he replace the good that left with Bryant.

The coaches have been raving about Valentin, a 6’1" junior college transfer who has worked very hard since enrolling mid-year to go through spring ball. In the preseason yearbook coach Tiller stated that Valentin has endeared himself greatly to teammates as well as worked hard on blocking and routes. This is very encouraging considering how poorly our receivers (other than Jake Standeford) have blocked in recent years. He also has great leaping ability, allowing him to go up for high passes that would otherwise be easy pickings for safeties. Right now he is slotted to fill the other outside role.

Keith Smith has been a vagabond for Purdue, but there are hopes he has finally found a home. Another hard worker, Smith originally came to Purdue as a quarterback before moving to safety as an emergency measure in 2006. In 2007 he redshirted and even left Purdue for a short time to sort out some personal issues. He got his grades back in order this summer and is cleared to play. At 6’2", 225 he gives us some size in a slot receiver we have not often had. He could be a replacement as a big, physical receiver to help fill the void left by Dustin Keller. Between the four, Purdue has their biggest set of front line receivers during Tiller’s time.

It would not surprise me at all if we got solid contributions from any or all of this group of four. Whittington and Whitest only have one catch apiece in their careers, but Whitest’s was an impressive leaping catch at Illinois in 2006 where he just managed to drag a toe in bounds. Both are 6’2", giving us even more size. They have been around for awhile as well, meaning they know the system and should be able to fill in should there be injuries.

Curry is our biggest receiver at 6’4", 203. He is an interesting case as junior college transfer. It is hoped that his sheer size will make up for his lack of experience at the division 1 level. It’s also nice that as a sophomore, he is expected to develop and have a larger role in 2009. He will likely get every chance to see the field. McBean hasn’t played much in his Purdue career, but could contribute in the slot.

Unfortunately, Curtis Painter’s final season may see him throw to his best receiver only inside the Mollenkopf. That’s because D.J. Donley, a transfer from Georgia Tech, has to sit out this season after having a solid freshman year for the Yellow Jackets. Purdue originally lost out on this big-time recruit, but picked him up when he decided to leave Atlanta. He will likely start immediately in 2009 and have three years of eligibility remaining once he does. At 6’4" 203 he is the big, athletic, physical receiver we have long coveted. He is also likely to put in the off the field work that Selwyn Lymon never did.

Panfil is another interesting quarterback turned receiver prospect. He’s also big at 6’5" 226, and could potentially work his way onto the field this season some time. He is still new to the position though, so don’t expect a major impact until at least 2009. Gravesande and Muhammad appear to have slot receiver written all over them, as they are smaller players with speed. Pencil them in for 2009 as far as making more of an impact, if not later. As wide open as things are this season, don’t totally count them out. They likely at least play against Northern Colorado when everyone will get a shot.

Replacing a player like Dustin Keller is never easy. Keller went as the first tight end in April’s NFL draft and was named last season’s team MVP. Purdue has a number of guys that will look to combine on his production, but no one person can fully replace him. The tight ends that do return were highly productive last season – when they got the ball. Adams, Lindsay, and Wasikowski combined for 13 catches and 120 yards. Five of those 13 catches went for touchdowns as well as Adams and Lindsay each had a pair of scores, while Wasikowski had one.

Adams is the likely starter and best pass catcher of the four. He has played very well as the #2 tight end in each of the past two seasons. At 6’5" 251 pound he is one of Painter’s biggest targets and a load to bring down when he gets moving. That’s exactly what we want out of a tight end. He’s also a strong leader off the field, as exhibited by his contribution to last week’s Boilermakings.

Being a load is the same reason Jeff Lindsay moved to tight end. I am a bit confused by this move, as he was recruited a linebacker and we’re thin enough there as it is, but he moves from fullback to tight end this year. He only had three catches for three yards, but was dangerous in the red zone with a pair of one yard touchdown catches. He has been called nasty and physical by coaches. I like that! Still, he was a four-star linebacker prospect and we’re incredibly thint here, so I question the motive of moving him to offense when we obviously have other options at tight end and fullback.

Wasikowski has plenty of experience as a blocker, but has also been reliable the few times he has been asked to catch the ball. Look for him to be in on goal line and two tight end sets where he can be forgotten while getting open for a big catch. McKey is the wild card. He comes from Texas where he wasn’t asked to do much pass-catching, but he certainly will at Purdue. 2009 may be more of his year to shine.