Share All sharing options for: Know thy Team 2008: Specialists 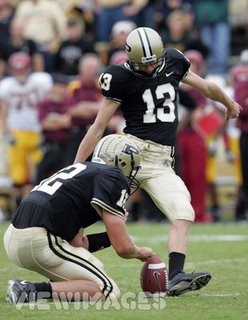 The first blogpoll of the season is up. Purdue is not ranked in the top 25, which isn’t a surprise. Some bloggers were kind enough to throw us a few votes, however. I have the feeling that if we start 2-0 with a win over a ranked Oregon team we can crack the top 25 easily. My final official ballot can be found here. During the season I’ll be posting my ballots on Sunday night for discussion, and they are due to be finalized by Wednesday morning for the next poll. Feel free discuss/praise/rip me for my choices as the season goes on. Special thanks go out to Brian of MGoBlog for running this with statistics I have long forgotten since my freshman year statistics class at Purdue.

As far as analysis, there are plenty of chances for Purdue to make noise in this poll. #2 Ohio State, #18 Oregon, and #21 Penn State are all on the schedule. Michigan, Michigan State, Central Michigan, Notre Dame, Iowa, and Northwestern were all good enough to at least receive votes in the poll as well. There will be no complaints about an easy non-conference slate this year. Not much else can be done until we go out and play the games now.

The know thy Team series didn’t go as well as I had hoped, but it mercifully comes to an end today. During the 2001 season it seemed like Travis Dorsch did everything. He handled punts, kicks, and kickoffs. As poor as our offense was, that meant he was on the field a lot. His clutch 50-yarder in the "Miracle in the Metrodome" game has to be the toughest Purdue kick ever. I think it benefited a kicker like Travis because he didn’t have time to think about it. As a result, Dorsch finished third in the voting for the Lou Groza award and won the Ray Guy award as the nation’s best punter.

Fortunately, our offense should be much better in 2008, meaning we won’t have to rely on Chris Summers as much. He is expected to handle both the placekicking and punting duties, but a couple of freshmen should challenge him in both areas. We may end up using someone else for kickoff duties as well, just to give Summers a break.

When it was announced that incoming freshman Carson Wiggs had agreed to come to Purdue after graduating high school in 2008 many fans thought Purdue would simply hang on with Summers doing the placekicking again. As a freshman in 2006 Summers was just 8 for 20 on field goals. He didn’t hit one after the Wisconsin game, and missed the final 8 kicks he attempted. It got so bad that fifth year senior Casey Welch came on to hit an 18 yard game-winner at Michigan State in the only field goal attempt of his career. Summers was roundly booed, and many people dreaded seeing him come on for even extra points. It was a worse season than Berin "The Serbian Shank Machine" Lacevic had in 2002.

With no one to really replace him the job was pretty much his by default in 2007. Tim Daugherty didn’t seize the opportunity before him in camp and later transferred. Summers made the most of his second chance by working hard with kicking guru Doug Blevens in the offseason. Blevens coached some guy named Adam Vinatieri, who has had a decent career in the NFL. In the season opener at Toledo Summers’ first attempt was just barely wide, but the second one of the game was true. A huge cheer went up from the Purdue section, and the pressure was lifted. After that opening miss Summers hit 18 of 21 attempts, with one of those missed kicks being blocked at Minnesota. He had a four field goal day with a career long at Penn State, hit four against Notre Dame in a game where we needed him to convert points, and hit three in the Motor City Bowl. His final kick of the season was a 40-yarder that gave Purdue its first bowl win since 2002.

Now a junior, Summers looks like he may be one of the better kickers in a conference full of pretty good ones. Austin Starr at Indiana, Dan Kelly at Penn State, and Ryan Pretorius at Ohio State could all lay claim as finalists for this year’s Groza award. With another season like he had in 2007, Summers could be right there with them.

It’s not a typo here. Summers is also expected to take over the punting duties for the departed Jared Armstrong. This was long suspected as he has been apprenticing Jared the past two seasons in practice and has carried the honorable title of backup punter since. Summers punted in high school at Hamilton Southeastern and was one of the best in the state of Indiana at the time. Two years and a change in levels later he is expected to handle double duty again. Coaches like his leg strength, so it is possible we could have a repeat of Dorsch’s final two seasons. In 2000 Dorsch was the deep punter while Scott Kurz was more of the pooch punter (though Kurz took over full time punting later in the year). Armstrong and Welch played those roles in 2006. We could see a reprisal of this with any of the incoming freshmen.

Cory Kemps and Carson Wiggs are candidates to start here as well, but Summers has the clear edge being the upperclassman. Placekicking is still his priority, but if he can punt that will make him even more valuable. It couldn’t happen to a nicer kid either. The blueprint for success is there from Dorsch’s final two years.

Both of these kids are versatile players that can both kick or punt. If Summers can nail both jobs this year I expect both to redshirt, then use 2009 to prepare for when both spots are open in 2010. If that happens, Purdue is likely set at both kicking positions through the 2012 season when Eastern Kentucky will travel to Purdue in the revenge game for stealing coach Hope. Asking Summers to place kick, punt, and kickoff may be a bit much. Either Wiggs or Kemps could see action if only on the kickoff team.

Wiggs may have a slight edge as the recruited player as opposed to the preferred walk-on status that Kemps has. Kemps did have three clutch field goals in last season’s class 5A state championship game for Carmel, a 16-7 win for the Greyhounds. Previously he only had a single made field goal in 14 games. Wiggs averaged 47 yards per punt as a junior in 2006. He has a big leg on kickoffs and was one of the most highly recruited specialists in the nation because he can kickoff, punt, and placekick.

Summers has been outstanding on kickoffs in his career. He has a good leg, but has often been asked to kick to a spot around the 20 in order to limit a big return. He has been very successful in this, as the Boilers have had one of the best kickoff coverage units in the country the past two seasons. Last season we gave up 16.9 yards per kick return, ranking second in the country. We finished 4th in 2006. As much as the defense has struggled, keeping opponents at the far end of the field is necessary.

Wiggs had to be disappointed that Summers came on strong last season to cement what looked to be an open job, but he still should get plenty of opportunities in the future. Kemps sadly won’t be coming with teammate Jordan Brewer just yet. He’s probably third on the list right now, but you can’t make an accurate assessment until training camp is over.

1,007 yards, 28 per return on 36 attempts, and two touchdowns. That is what Purdue lost with Dorien Bryant departing as a kick returner. It is a shame that Bryant has been unable to land a spot in an NFL training camp as a returner because once he did touch the ball on a return there was a chance for six. He had three kickoff returns for scores in his career, more than anyone in recent Purdue history. I don’t know if Purdue as a team had three other kickoff returns for touchdowns under Tiller (I know Jerome Brooks at Notre Dame in 2004 and Desmond Tardy at Minnesota last year, but that’s it).

Tardy is the leading candidate here, and he is more than serviceable as a replacement. Minnesota kicked away from Bryant to start last season’s game and Tardy simply fielded his first kickoff ever (at any level) and took it 95 yards untouched for a touchdown. He only fielded 8 kicks, but Tardy had a slightly higher average than Bryant. Sheets has experience from two years ago, which will be handy. Jaycen Taylor appeared to be ahead of him for the other spot until his injury this week. I’m perfectly comfortable with Tardy and Sheets back there.

Purdue has had a number of good punt return specialists like Vinny Sutherland and Anthony Chambers, but since Chambers left this has been an area where we have been lacking. Bryant and Tardy shared duties last year. Bryant had 15 returns for a 6.2 average while Tardy carried a 20.5 average on a pair of returns. That’s a good sign. If Tardy can return some electricity to the punt return game then it will be another weapon we can use. The defense must consistently get stops so this weapon can be used, however.

I was recently watching the tape of the 1998 Alamo Bowl and I was thankful that snapping issues have been an afterthought for a long time. Anyone who remembers that game may have conveniently forgotten that punts were and adventure then. Huffman has handled duties just fine since 2006. If you look at his Rivals profile you can see a link back to a 2006 article wishing for his anonymity. He has it, and that’s a good thing.

There have been some rumblings about a potential new holder this season after Jared Armstrong’s graduation. Painter had the duty two years ago and appeared set for a return this year. The new situation may not be working out though, so it should be Painter’s job for the time being. Any time he is on the field gives him another opportunity to throw, so on a broken play or designed fake it is important to keep in mind that the starting quarterback is right there. Then again, when Dorsch threw for a TD off of a blocked punt at Central Florida in 1999 things were just fine.