Share All sharing options for: Know thy Team 2008: Offensive Line 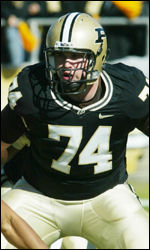 If possible, Purdue’s offensive line would have been the best hospital unit in the country ruing the spring. Four starters from our bowl game against Central Michigan return to protect Curtis Painter, but three of those four returning players had offseason surgery and missed spring practice. A number of backups also missed the spring, meaning that developed depth could be a problem if injuries develop.

The biggest develop on the offensive line may not come on the field at all. Head coach-in-waiting will be managing this unit as Tiller completes his final lap, and that is a very good sign if you are a Purdue fan. A large reason that Drew Brees became Drew Brees came from when Hope was the offensive line coach from 1997-2001. He built a unit from unwanted and unheralded recruits into one of the best lines in the country during the 2000. The famous "Protecting the Franchise" cover from GBI in August of 2000 features a line where all five starters eventually played in the NFL. Two of them (Matt Light and Brandon Gorin) became 40% of Tom Brady’s Visa five layers of protection. Light, with three Super Bowl rings, is one of the best left tackles in the game today. He could find his way to Canton if he continues to play well. The man is a miracle worker considering he got a pair of offensive linemen to get endorsement deals, (two deals in Light’s case) so I am glad he is back.

The offensive line has rarely been a problem at Purdue, but it is paramount that the starters stay healthy this season. In my view, the best offensive lines are the ones that go virtually unnoticed. Most people only notice an offensive line if problems in protection develop or the running game stalls. In the greatest play in Purdue history (Brees to Morales) the offensive line played so well Brent Musberger had time to notice and praise them before Brees found Morales. No one came close to touching Drew on that play, and coach Hope can build another unit like that. If that happens and the receivers develop, Purdue will again have one of the best offenses in the country.

Sester is the key to the unit at left tackle. Charged with protecting Painter’s blind side, he is a three year starter. This will be just his second at the critical left tackle position. Sester is certainly big enough at 6’7" 325, but back surgery during the offseason leaves him as somewhat of a question mark. Tiller has said he would be ready to go if the season started today. He has enough size and experience that he is far from being a liability, but Purdue wants him to dominate in this his final season. Hope will surely get the most out of him, and thereby make him a fairly high draft pick come April. The precedent is there, as Light and Mike Otto have both been drafted from the left tackle position since 2000. Sester has 38 career starts, so experience is not in short order.

Jones was not expected to play much last season, but did fairly well. That makes him a huge asset as far as experience on the line goes. He didn’t play at all before last season, and hip surgery in the offseason limited him in spring practice. While it is good that Purdue was able to give some other players experience at the tackle position in the spring, no team wants their two starting tackles to miss all of spring ball. I’m encouraged, though, that they have the familiarity hat comes from a year at each position. I fully expect Painter to be fine from the corners, and playing in the Big Ten means both will be tested by excellent pass rushers. Fortunately, we have always had a pretty good pass rush ourselves, meaning they do see it every day in practice.

With Pierce we actually have a returning starter that was able to take part in spring practice. Being the youngest member of the line, that is probably a very good thing. There was some concern last season when he had to play for Jordan Grimes who seemed to be a starter forever for us, but he played very well in the final three games of the season. At 6’4", 314 he has some good size for a guard, and it will be critical for him to use that size to create holes for Sheets and Saylor to run through. We didn’t have a problem against the Central Michigans and Eastern Illinois of the world, but when we faced real, live defensive tackles like Michigan and Ohio State have we struggled to create anything in the interior. Plus, the dude has fire-engine red hair. How can you not appreciate that? If he starts wearing it up more we can call him Syndrome.

Reckman was another player that missed all of the spring, this time with a shoulder surgery that kept him sidelines. He was another player that was a first-year starter last season, but that will only help not just this year, but in 2009 when Justin Siller or Joey Elliott takes over the offense. At 6’6" 308 he was asked to put on weight during the offseason, but naturally the shoulder injury limited those efforts. He didn’t fair well last year against good teams.

Benton may be a fifth-year player, but this is the first season in which he has been asked to start. A former walk-on, he started out at tight end before moving to tackle. He then backed up Reckman at left guard last year and saw some time in the rotation. This spring he moved to center and appeared to win the starter’s role to replace Robbie Powell, who was a great center for the past few years. Purdue has a history of successful centers who are former walk-ons, as Nick Hardwick took this route before becoming a Pro-Bowler with the San Diego Chargers. Benton won the Pit Bull award in the spring as the most tenacious player, so the coaches are very high on him. I kind of like having him in this important spot as well. As a walk-on, he knows hard work. Jake Standeford paid some serious dividends from a similar background last season. I’m a big fan of players like this who value their time on the field a little more than some other because of what it took to get there.

Because of injuries, all four of these guys got to see plenty of time on the field in the spring. Miller, Hedstrom, and Zwilling have also been around for awhile and seen some game action. This is very reassuring if a rash of injuries do occur. A couple of these guys like Plue, Hedstrom, and Miller could even compete for starting positions when camp opens. As long as everyone stays healthy, they will at least provide solid depth.

Plue is the most interesting one of the group. As our only 4-star recruit during the last recruiting cycle, much is expected of him since he is the star of the class. He has the size (6’7", 361lbs) to break the automatic redshirt rule that nearly every Big Ten offensive linesman goes through. If he does redshirt, you can bet he will likely be a four year starter beginning in 2009. If not, he could still win a spot at right tackle or one of the guard positions anyway. As it looks right now, a redshirt is unlikely and Plue will probably be at least a backup.

Zwilling is a convert from the defensive line and is expected to compete with Benton at center. He missed much of the spring with back problems, but GBI’s preview seems to think it wouldn’t have mattered anyway with the way Benton played. Zwilling can fill in at one of the guard spots, giving us come versatility.

Miller is expected to compete with Jones at right tackles. He’s tall at 6’8", but is a tad undersized weight-wise at 275 and has struggled with injuries throughout his entire Purdue career. He is currently injury free, so he could play a larger role. Hedstrom is expected to provide depth at guard, but his time may be more in 2009. He has good size for a guard at 6’6", 292.

For the future things couldn’t look better. Purdue has depth on the offensive line this season if everyone is healthy, and will likely have to replace just a pair of starters for 2009. Plus, there are nine true or redshirt freshmen on the roster that get to be molded by a coach who has a proven track record of developing very good offensive lines at the college level. Plue was able to leave prep school early and go through spring practice, while Chacksfield and Schmeig were able to do the same. Unlike Plue, however, Chacksfiled and Schmeig will still likely redshirt this season and may not see the field until 2010 at the earliest. By then, they will be ready. Barry and Shepherd both had their redshirt year last season, but with all the depth they will likely not crack the two deeps unless injuries show up again. That gives them another year of practice and in the weight room to compete for starting spots in 2009.

Joining these four are redshirt freshmen Connor Mculley, and Austen Moret, as well as true freshmen Peters Drey, and Andrew Brewer. Drey and Brewer will most assuredly redshirt, and also will likely not see the field until 2010 as well. Still, there are a lot of young linemen on this team. I like our chances at having a great line for many years to come no matter who is behind them.