Share All sharing options for: Know thy Team 2008: Linebackers 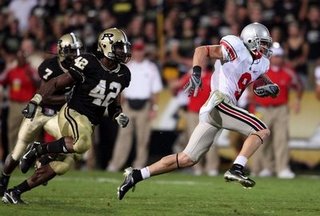 It is no secret that Purdue needs linebackers. In MGoBlog’s assessment of Purdue Brian pulled no punches in his evaluation of our starting linebackers. He stated that when a player switches positions and instantly becomes one of that new position’s best players it is not a good sign for the overall health of the unit. This comment was made in reference to Anthony Heygood and our linebackers.

Long gone are the days of Landon Johnson, Willie Fells, Niko Koutouvides, Joe Odom, and other good Purdue linebackers. It seems like we have consistently been searching for good players and depth in this spot since the great defense of 2003 departed for the NFL en masse. Players such as Dan Bick, Standford Keglar, and Josh Ferguson were alright, but they were far from the force that Big Ten linebackers need to be. When I think of Big Ten linebackers I think of the exceptional units that Ohio State, Penn State, and even Iowa have put on the field in recent seasons. We have not had these units, and our defense has struggled not wholly because of it. It has been a big reason though. Teams have been able to either run on us or pass on us depending on the situation and our weakness in that particular game. For us to finally beat a good team in 2008, we need improved play from our linebackers and depth to develop.

In order, we have a converted running back, a guy who is starting for the first time after a couple of back surgeries nearly ended his career, and a former starter in the middle who has already washed out once as a starting middle linebacker.

GBI has done a wonderful job of trying to spread some optimism with these three guys as starters all while pointing out how little depth we have at the position, but I am a realist. Sure, these guys can play and may even surprise, but that is a huge if. It’s too huge of an if that is carrying too much of the burden of our team success. In 2006 we rarely if ever blitzed because of experience and teams tore us apart both running and passing. Things were better a year ago, but only Heygood returns with starting experience among these three. In his first full season on the defensive side of the ball he acquitted himself well with 81 tackles, a sack, three pass deflections, and three forced fumbles. Some circles are even talking 1st team all-Big Ten honors for him, which is not bad for a guy that hasn’t played the position that long. He’ll continue to be on the outside for now, and is a good block to build around. He may be the best player on our defense.

Werner will man the other outside position, and everyone is crossing their fingers that his surgically repaired back will hold up. As a reserve last season Werner had 28 tackles and a sack during the first season he’s seen extensive playing time. Coaches have compared him to Johnson, Koutouvides, and Odom as a hybrid of all three. I’ll take that kind of player and run with him, if he can stay healthy. Werner has put on weight and had a very good spring, but that back situation still makes me nervous. The same can be said of Torri Williams, who is a good player but seems to have had everything go wrong in his career. Werner definitely looks like a promising player.

Green had a chance last season to be the starter in the middle, but lost the job to Josh Ferguson. Ferguson is gone, and Green had another good spring to move back into this role. He only had seven tackles in eight games a year ago, but as a sophomore there are hopes he can develop into a starter for years to come. He has good size at 6’2", 236, but he needs to have speed and range if he is going to play in the middle. He is generally considered to be the weakest link of the three, but he is motivated to claim what he lost last year. If not, Heygood will move inside and we will pray another starter emerges in training camp. It is officially here where we start rolling the dice.

We already are suffering here because it was announced yesterday that incoming freshman Dwayne Beckford was declared not eligible for the fall. As much as GBI and Purdue are trying to place the blame for this on the NCAA, it is the high school’s fault.

During my time at the NCAA I found that some of the hardest places to deal with were high school when it comes to getting information in about their classes. Each incoming student athlete must have completed 16 approved core course credits in a variety of subjects. For Division 1 it is 4 English/Language Arts, 3 Math (at Algebra 1 or higher), 2 Science, 1 additional Math, English or Science, 2 Social Studies, and 4 additional core courses of any kind (this is where foreign language courses often go). The process is so amazingly simple I am surprised that anyone has trouble with it, but it happens a lot.

Each high school has a list of core courses that are already approved by the NCAA. You take a course off of that list and pass, it counts. It’s that simple. A credit, in this case, accounts for one full year of that subject. Where kids get into trouble is when they take a course that is not officially on that list yet and expect it to count. It’s not even that hard for a test score to be reported. Simply call the SAT or ACT and have them send an official score report. Since it was done electronically, they were ready overnight in most cases. At that point it was a matter of having a high enough GPA in the core courses to go with the test score. You can even mix and match test scores from each time you take the test. For the SAT they’ll take the best math and pair it with the best verbal. For the ACT they took the best score from all four sections and combined them for the best possible score.

This is what I can guess is what happened in Beckford’s case. The key line in the article is this one: "What had happened was the class was ... they had funding for the class, but they ran out of the funding, so they left the class off the (paperwork to the NCAA). Now, they can re-submit their (paperwork), but they won't accept it in his case because they're the NCAA." This is epic fail by the high school. Many classes, when submitted are automatically accepted without reviewing paperwork (such as Calculus). Others, however, must have paperwork submitted to prove that the course is indeed considered a college prep course. This is the high school’s responsibility. The process can take some time, so I advised parents and kids strongly to take another course if it is not on the high school’s approved list already because there is no guarantee the course will be accepted. In this case, the review staff must have determined the course wasn’t college prep, and Beckford was denied. Likely his high school (and maybe even Purdue) was telling him it would be approved the entire time, when they did not have a guarantee it would be. It is unfortunate, but there is a lot more on the high school here than GBI is letting on. There is just my guess on how things went down based on my experience working there. I saw a very similar case late in my time there, and it eventually worked out for the kid. Here, it didn’t.

Matters are now worse for the kid because he won't be enrolled at Purdue this semester. Had he stayed enrolled, he could have completed this semester and the next, then been eligible next season w thout having to go through the paperwork process here. He then could have gotten his fourth year of eligibility back at the end if he was 80% of his way to a degree after four years (thereby making this year a default redshirt). This is what Selwyn Limon did, as that is another very similar case. Limon paid his own way the first year and was eligible in year two. Beckford now must hope the paperwork goes through the second time or we will lose him next year as well since he won't be a JuCo grad, won't have a full year finished at a D-1 institution, and won't be initially eligible out of high school.

With that over, we lose a player that was possibly going to contribute in an area of huge need. When it comes to injuries, Purdue had better hope that someone can develop into at least a serviceable backup when it comes to linebacker. If not, we are screwed. There is no way around that fact. Even if everyone stays healthy we’re basically asking for Green, Heywood, and Werner to play ironman football with no substitutions. This is where longer drives on offense to give the defense more rest would come into play, but I have been calling for that for years. One of the problems with having a very good offense is that sometimes they score too quickly and the defense can’t get the break it needs. I doubt we’re going to become a 15 play, 8 minute drive type of team any time soon, so we must make do with what we have.

Other than the starting three, only Haston has any playing experience whatsoever. After greyshirting in 2006 he had 8 tackles in 8 games last year, most of that coming in a special teams role. He is a former high school quarterback and is big at 6’3", 222. He had a very good spring and I like what I saw from him in the spring game. He will be well-served by a year this season as a backup before likely starting next year.

After Haston we have essentially a giant question mark. Joe Holland has been discussed as a possible backup, but he is listed as a safety at the moment and would need to change positions. Jarrod Shaw (Sr) and Ronald Calloway (Jr.) are upperclassmen who have never played and are probably scout teamers for the moment. Greaves redshirted last season and may have a leg up on others for one of the backup slots. The same can be said of Humphrey, who as a sophomore has at least been around the program for a little while.

I originally had Beckford here, but after the article published by GBI I probably should have had him in the next group above. It’s hard to say much about these kids because they are not highly touted and even the most ardent fan of recruiting knows very little about them. This is our number one position of need for the future.

There is a very strong chance at least one, if not more, of these freshman will see some significant playing time this year. That is good for the future, but bad for the present as they are inexperienced and a little undersized. Of these the only one I have seen in person is Carlino, who was a three year starter at Hamilton Southeastern and was a former teammate of kicker Chris Summers. As a sophomore he helped HSE reach the class 5A state championship game and was long the anchor of their defense. I like his instincts from what I have seen. Yes he is just an Indiana linebacker, but he played in one of the toughest football conferences in the state. That has to count for something.