Share All sharing options for: Know thy Team 2008: Defensive Line 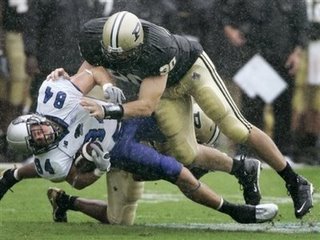 Training camp started this weekend, and already I have been proven wrong with the offensive line preview. Sean Sester has been moved back to right tackle, while Zach Jones will move over to left tackle and protect Painter’s blind side. Coach Tiller says that Jones was playing the best of anyone on the line, so why not move him. As long as he does the job I don’t care who is there, but I trust this move.

One more thing before I get to the next unit preview. I recently answered some questions for the blog Saturday Sound-offs. My answers have been posted over there as of today. This is a pretty good college football blog that is neutral when it comes to having a definite allegiance. Their preview of Purdue will be coming shortly.

Though Purdue has long been know as the cradle of quarterbacks, under coach Tiller we have made plenty of millionaires at the defensive end position. A couple of years ago the sports marketing department tried to capitalize on this by saying we were now the Den of Defensive Ends, but it has never really caught on. Should Curtis Painter become the high draft pick that many are expecting, there is a good chance that the 2009 season will feature three Purdue grads as starting quarterbacks. That number pales in comparison to the number of defensive ends we have put into the NFL since coach Tiller came to town.

Chike Okeafor, Rosevelt Colvin, Akin Ayodele, Shaun Phillips, Rob Ninkovich, Ray Edwards, Anthony Spencer, and Cliff Avril have all had very successful careers as defensive ends in West Lafayette that have led to the NFL. Chuke Nwokorie, Craig Terrill, and Brandon Villareal have also made it to the next level from the defensive tackle position. This means the defensive line has been the most productive spot on our team NFL-wise for the last 12 years. This season should be no different.

When it comes to defensive ends Purdue has reached the point of merely asking who is next in line. The answer to that question this season is a little foggier than most years, but it’s not a very thick fog. Both Kerrigan and Brown were reserves last season, but played strong when they were on the field. Brown has probably the highest expectations placed upon him. Being a junior, he has been with the program for awhile and has had several good examples in Spencer and Avril to learn from. Brown played in 13 games a year with 21 tackles and 3.5 sacks, but his most impressive game was the bowl game against Central Michigan. Facing an incredibly mobile quarterback, Brown made life miserable for Dan LeFevour as Purdue built a lead it would need. Brown had five tackles and 2.5 sacks against the Chippewas, providing a nice springboard for this season.

Kerrigan also saw action in 12 games as a true freshman a year ago, with 18 tackles and a sack that came in the opener at Toledo. That is a surprising amount of playing time for a true freshman. He looks like he will be a fixture on the defensive line for the next three seasons as a result. He has good size for an end at 6’4", 255, and I like that he was a tight end in high school. That tells me he knows how to get off blocks and into the open field. Instead of pursing the ball he’ll be pursuing the quarterback. Purdue may not have the single dominant pass rusher it has had in the past, but with these two and a pair of capable backups/specialists it may be even better as their won’t be one guy to concentrate on like offenses did against Spencer.

Our best ends have never had overwhelming size. They have been creatures of speed that have often been converted to linebackers in the NFL. Kerrigan and Brown appear to be in this mold.

This may be the deepest position on the team, which is great news as it allows us to have multiple rotations and to move players both inside and outside. McGee is one of those players that could move outside in a pass rushing role. Both McGee and Baker did a respectable job of stopping the run and plugging the middle a year ago. Compared to the previous two seasons against the run their effort was downright admirable. One needs look no farther than the last two Iowa games. In Iowa City two years ago the defensive line was pushed all over the place a Damian Sims and Shonn Greene ran on us all day for 243 yards and three touchdowns. Last season Sims and Albert Young ran for 83 yards combined and Iowa scored 6 points. The middle should be even better this year.

Magee had 38 tackles last year, but no sacks. He will be asked to get to the quarterback a lot more this season. That is not to say he has never been disruptive in the backfield. Against Illinois in 2006 he recovered a fumble in the backfield for the only defensive touchdown of that season. The big man also had an interception in that game. Magee is expected to be the breakout performer along the line like Spencer and Avril before him. The only difference is that he will spend most of his time in the middle. Defensive Coordinator Brock Spack didn’t mince any words when he said Magee should be the best defensive tackle Purdue has ever had. That is high praise especially sicne Jeff Zgonina is about to start his 17th NFL season. Magee has played since he was a true freshman in 2005, so experience is not an issue.

Unlike Spencer two years ago, Magee will not be alone if he has a monster season. Baker is another stalwart along the line with 22 stops last season. He is a former tight end like Kerrigan. He has been known as a hard worker, and his big 6’5", 280 pound frame will be welcome in the middle. I like this kid’s desire as well. He has the looks of being a very vocal leader on a defense in search of one.

Some of my favorite Purdue players have been guys like Jermaine Guynn. He, like Jake Standford a year ago, is a guy that came to Purdue as a walk-on with zero expectations and has worked his butt off to find the field. He may not be the most talented guy out there, but the 5th year senior will give you everything he has when he is on the field. He was limited last season to just 6 games, but he will figure into the rotation this year in order to keep everyone fresh. On effort alone I’ll take Guynn over a number of other guys.

Neal was also hampered by injuries a season ago, but he did register 22 tackles and a pair of sacks. Both he and Guynn will look to be more than just space fillers when Magee and Baker need a break. They will also be able to contribute themselves and not give the opposing offense a break. Both guys are at around 290 size wise, so they will be difficult for smaller linemen to move them out of the way. All that we need is a consistent pass rush and our defense will be much improved.

Part of that pass rush is hoped to be filled by a couple of redshirt freshman defensive ends in Gooden and Golding. Both were hailed as diamonds in the rough of the 2006 recruiting class that needed to develop. Well, they have had their redshirt year and now will be asked to contribute. Golding is on double secret probation after an indefinite suspension was lifted during the summer, but coaches really like his athleticism. He needs to put a bit more weight on at 6’5" 225. Gooden is said to be more of a natural pass rusher, but both will play.

With eight upperclassmen expected to play plus another redshirt freshman in Numa who might vie for playing time one would think the five true freshmen here would be primed for a redshirt year barring injuries. Coach Tiller has already said that at least one of them will probably play some. Personally, I don’t care who plays as long as we continue to improve against the run and can get to the quarterback with the regularity that Purdue fans have come to expect. The defense won’t be worth a damn unless we can do either.

Kawann Short is an interesting case. He is a former teammate of basketball player E’Twaun Moore and the pair won a state title on the hardwood in 2007. There has been some talk of him possibly playing a little basketball at Purdue, but it is not likely as of right now. He is more of a defensive tackle, and therefore is a prime redshirt candidate because of the depth there. He was the highest rated player of this group, so if he doesn’t play everyone else will likely sit and take a year in the weight room.

This puts Purdue in a prime position where we have depth for the present and time to groom the future. Since this is becoming a signature position for the program you cannot ask for much more.