Share All sharing options for: Know thy Team 2008: Defensive Backs 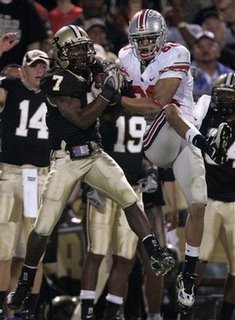 The breaking news late this evening from West Lafayette is not good for the present, but may be good for next season. It has nothing to do with the secondary, but it is clearly important enough to be talked about immediately. Gold and Black Illustrated is reporting that running back Jaycen Taylor has a leg injury that is potentially serious. Taylor missed four games with a broken arm a season ago, and in those four games Purdue went 2-2 and barely had a running game in each. This is something we can recover from, but it is still a difficult blow because of Taylor’s fire and leadership.

There is nothing definitive yet, but GBI seems to think this injury will cost him the season. He can redshirt, leaving him as the number one guy with a much improved Dan Dierking in 2009. Dierking would serve as the primary backup this season, allowing Frank Halliburton and perhaps incoming freshman Ralph Bolden some playing time. Since I published the running backs preview a few weeks ago we have lost Malcolm Harris (dismissed from the team), and Albert Evans (switched to safety) from our depth at running back. Suddenly we went from a promising future to making this a major position of need recruiting-wise.

This also means that Kory Sheets will get his wish. He will be the man and have every chance at getting his 1,000 yard season. If he does, Purdue will be just fine offensively. I can see Kory having a big year, but I will miss Taylor for the leadership and depth he provides. The safety net is now gone. Sheets had better be over his fumble issues. It also means Sheets will most assuredly break the career touchdowns record.

Two years ago Purdue’s secondary was in even worse shape than our current situation at linebacker. At least there we have two players who are solid starters and could be all-Big Ten picks before the season is over. In 2006 we were faced with starting freshmen and JuCo transfers at all four spots in the secondary. Depth became even more a problem just one game into that season when Torri Williams shredded about every knee ligament you can shred in a meaningless game against Indiana State. Brandon King also became an academic casualty, so we were forced to start undersized true freshman Brandon Erwin for most of the year. He played with a ton of heart and had a fumble recovery in seemingly every game, but he was severely overmatched most of the time. Keith Smith, now at wide receiver, was also forced to burn a redshirt and play at safety for a good portion of the year.

Last year was more of the same, as our corners were better with a year of experience, but injuries in consecutive weeks to Erwin and Williams burned the redshirt of Josh McKinley. Brandon King got over his academic issues and we got a pretty good year from Justin Scott before he graduated. Terrell Vinson also grew up and gave us a five interception, 84 tackle season before getting abused in the second half of the Motor City Bowl. Vinson and Justin Scott must be replaced, but the playing time gathered by everyone under emergency conditions the past two seasons should pay dividends this year. Because of that, I think the defense as a whole will be much improved and will surprise some people.

I am excited that Pender has switched jersey numbers to #9 with the departure of Dorien Bryant, as it gives me two more solid years of wearing that jersey. That even applies to the gold jersey with black numerals I bought for Stu Schweigert in 2003. As a freshman Pender was in the right place at the right time as he caught a tipped pass by George Hall for an interception in the end zone against Minnesota that probably assured the Boilers would go bowling that year. His sophomore year saw him gather 44 tackles, 6 pass break ups, and another pick. He has some good experience having played extensively the past two seasons.

Pender is expected to be one of the best cornerbacks we have had this year, as he has always been pretty athletic. He now has more size to better match up with the big receivers found around the league. With him we may have the coveted shut down corner we’ve been looking for. He started last year opposite Vinson for the final seven games, but will be the number 1 guy this year with Vinson’s departure.

Brandon King was recently announced to have switched back to cornerback after playing at safety a sason ago. This move slides Royce Adams back a bit on the depth chart, but Adams will certainly see plenty of playing time in nickel packages as an experienced corner. King’s natural position is at cornerback, and he moved the same day that Sean Sester moved back to right tackle. This move is not a surprise, as it has been suspected since spring practice. King wants to be in the middle of the action, so he will be happier at corner.

Adams has played a lot as he has learned the last two years, so I like the experience he brings to the table. Sophomore Charlton Williams played as a true freshman a year ago, giving us even more depth in this area. Having four good options is very good for nickel packages, so Adams will play a lot regardless. The best news is that all four should return for 2009 too.

Our safety position could have been deeper. Erwin became an academic casualty over the summer, but he was recovering from a torn ACL so he was a question mark anyway. If Torri Williams can ever stay healthy he is probably our best player here, but he has been unable to do so yet. That leaves McLean and McKinley playing the role that has needed a Stu Schweigert or a Bernard Pollard for a long time. I was never fond of Pollard’s attitude, especially his penchant for celebrating tackles made 15 yards down field with the game out of reach and the bowl streak officially over (hello Penn state 2005). Schweigert, however, was one of my favorite players when he wasn’t getting arrested (which, sadly, was often).

McKinley is only a sophomore, but he could potentially become a Stu type of player. When Erwin and Williams got hurt last season McKinley came in and played very well, especially considering he was redshirting before the injuries. He played especially well in the bowl game, gathering five tackles and a sack. Purdue’s defense is best when it has a guy that can play up against the run as well as defend the pass. This is what Schweigert and Pollard both did well. When we have one dimensional safeties our defense is pretty bad.

McLean is a bit of a mystery. He was a very late JuCo signee from Fullerton College in California that came in long after signing day. Purdue was the only major conference program that recruited him, but since he came to campus he has impressed coaches with his work ethic and attitude. He’s a big safety at 6’1" and has worked hard in the weight room over the summer. We could use a big hitting safety quite badly, and I think McLean can fill that role. If everything the coaches have said about him is true, McLean could be one of the most surprising players in the conference.

The starters should all be around for another season, meaning the 2009 secondary will probably be a pretty good one at least as far as experience goes. The reserves this year are a mixed bag. We’re not as thin as we are at linebacker, but it’s not an extremely deep position either. All four players here have seen the field for us in their careers, but Martin and Williams are recovering from injuries.

The best player of the group, and maybe the whole secondary, is Williams. Everything that can happen to this guy to keep him off the field has in his career. 2005 was ended early because of a broken leg. 2006 saw him tear three knee ligaments in the season opener against Indiana State. Last year Williams had 17 tackles, a sack, a forced fumble, and a pair of interceptions before rupturing his Achilles tendon at Michigan. He also has been arrested a couple of times, once for DUI and another for stealing condoms from a local grocery store. As a result, he is on double-secret probation with the coaching staff. If not for the fact that he is such a hard worker he would probably already be gone. His suspension was recently lifted, but that only means he can play. One more mistake and he will be gone.

Charlton Williams is a promising player that got on the field as a true freshman a year ago. At 6’2" He is very tall for a corner, but he only had 4 tackles in all 13 games last year. Martin is back for another season after missing all of 2007 with a shoulder injury.

The safety position took a hit when Brandon Erwin flunked off the team. His depth and experience were important last season, and many predicted he would have made a big leap if he recovered from a torn ACL suffered against Iowa. It should be noted that redshirt freshman Joe Holland could also play, but he may be switching to linebacker because of need.

It is hard to predict the future when all four current starters are set to return and the three seniors of the unit (Frank Duong included) are expected to have limited contributions outside of Williams. That means the 2009 secondary is likely set, and Charlton Williams with McKinley should play well into 2010 as well.

Evans recently switched over to safety from running back, but is a strong candidate to redshirt as he learns a new position. He was one of the better players in our most recent recruiting class. He is joined at safety by Thomas and Holland.

Holland is a very strong candidate to move up to linebacker and compete for immediate playing time. He was one of the top players in the state of Indiana two years ago and redshirted last year. He has long been speculated to be moving to linebacker, but no move has been made yet. Until he moves, he will be here as quite a promising prospect.

Thomas is also another promising player. He was one of the best players in the state of Illinois last season. Illinois, Michigan, Nebraska, and Kansas State were some of the better programs recruiting him. He is tall, but he clearly needs some more time in the weight room at 175 pounds before he will be a serious contributor. I expect he will redshirt unless we absolutely need his services, but that is not a bad thing.

Green is the only cornerback of this group. He is a 3-star prospect from Tallahassee, meaning he was stolen right out of Florida State’s back yard. Because of the depth at the position with upperclassmen he will almost assuredly redshirt, but that is not a bad thing. He is expected to be a sleeper of a player, but we probably won’t find out until 2010.