The first WTF of the season

Share All sharing options for: The first WTF of the season 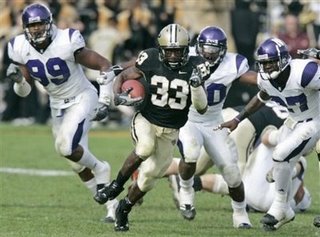 I’m taking a break from the position previews because today was a very busy day when it comes to the upcoming season. Last night we had the news that Jaycen Taylor was injured at the end of practice. Today it was revealed that the injury sounds just as serious as expected. Nothing is official, but the tone of that article certainly makes it sound like Taylor is done for an extended amount of time, if not the entire season. At least if he returns healthy he will be the full on starter in 2009.

What was more surprising was some of the position switches that were announced at the end of practice today. The Magee move is not a surprise. I actually like it as it gives us some serious size on the defensive line, which is what we have lacked for a long time. Magee is quick for his size as well. He can make a difference on the end while we have several other good players that can play at tackle. This makes the defense a lot better, in my opinion. It also erases, at least partially, a question mark. The Justin Siller move, however, as me thinking one thing:

Since beginning this blog two years ago I have often been slow to criticize moves of this nature. I have taken a wait and see approach to things. This is something I can’t sit on. Here is a kid we were grooming for the future at quarterback. Even though Tiller won’t be on board, Danny Hope will still need a quarterback for his team. I liked that Siller could gain experience this year and maybe split duty with Elliott next season before taking over full time. It was a great plan. We were finally going to have a quarterback with plenty of time in the system ready to take over (aside from Kirsch) when someone left. Everyone was fine with this.

Now he’s moving to running back? A 6’4" running back? Excuse me? Does anyone else not notice the tone of the article announcing the switch? He’s not exactly excited to be there. It feels like we’re going to just shoehorn him into the offense before anyone else who naturally plays the position has a chance. I know he was going to be more of a threat running the ball at quarterback, but that doesn’t exactly make for a great running back. In terms of size he’s close to Halliburton and Jared Crank, but they are fullbacks. It sounds like they want him as the tradition smaller, quicker halfback.

Siller is still behind Sheets and likely even Dierking at this point. Halliburton will also play a role as well. That’s what makes this move even more strange. Yeah, we lost one guy, but it’s not like we were dangerously thin at the position as we have been at safety for years or linebacker. Even a move to those positions would have made more sense. If he wanted to get on the field he was more likely to there as well.

We’re not afraid to burn redshirts on running backs either. Dierking wasn’t redshirted and played in his first game as a true freshman surprisingly last season. Ralph Bolden likely could have done the same this year and been even more successful. Maybe he is still being hampered by his knee injury more than we know and that is why they want to save him.

I just don’t know about this. It doesn’t feel right to me. It feels like we just mortgaged the future for a knee jerk (no pun intended) move, especially if Siller isn’t exactly excited with the move itself. Perhaps his development at quarterback isn’t what it was expected to be. We saw signs of that in the spring when there was talk of him playing a few snaps per game at QB, but that talk was silenced this fall. He lost out to Elliott, and from what I saw of his throwing motion at the spring game I could tell he needed to work on some mechanics.

I think, at least on the field, the Taylor loss is big, but it happened early enough that we can get around it. We’ll get our yards and I am comfortable that someone will emerge. I also feel that Sheets is capable of picking up most of the slack himself if he can hold on to the ball. We will miss Taylor’s heart and spirit. That is something that is irreplaceable. We know he’ll be on the sidelines as one of the team’s biggest cheerleaders, but that is totally different from being in the huddle.

I’m not going to panic because of the injury. We’ve survived injuries before and they will happen again. Fortunately, this happened at a position where we at least had a little bit of play. It’s not like it happened at linebacker, where we can’t afford anyone getting hurt. It won’t make a difference in the games where we completely abandon the running game anyway.

So I want to know. What do you readers think? I’ll get back to the previews later this week with Special Teams concluding the feature.